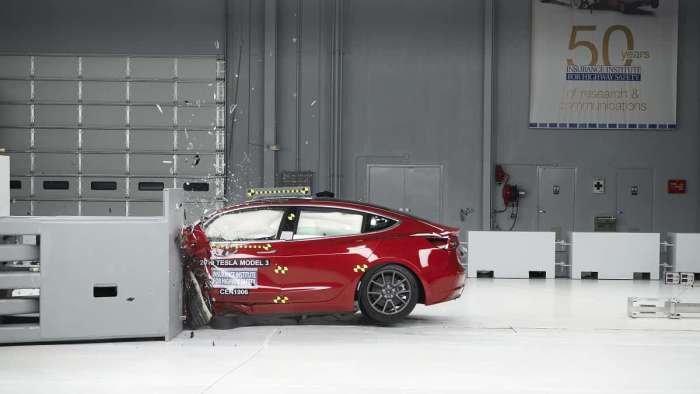 The Tesla Model 3 has earned the country’s most challenging safety award. Here’s why this result is special to Tesla.
Advertisement

Tesla’s Model 3 premium/performance sedan has earned the Insurance Institute for Highway Safety’s highest award, the Top Safety Pick Plus. The Model 3 has been in testing for much of the summer and the results have been known to Torque News for a day or so as IIHS allowed the media to prepare stories under embargo. This one was hard to keep a secret. 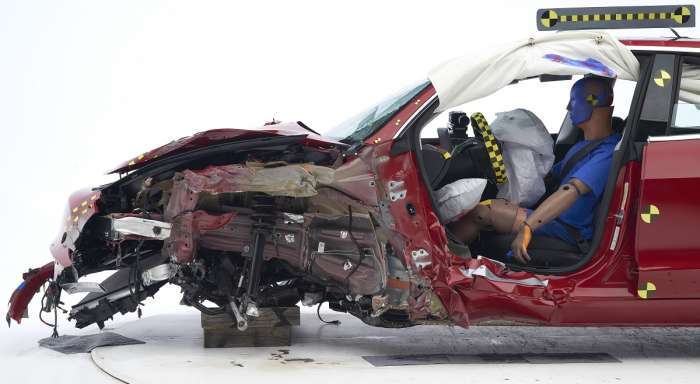 Tesla vs. IIHS
Tesla has had a rocky relationship with IIHS. The Model S luxury/performance sedan was twice tested and twice failed to earn a score high enough on the difficult, but important small frontal overlap test. The Model S does not have any level of safety award from IIHS and the Model X has not been tested. For background on that, please see our prior story, Tesla Model S At Bottom of IIHS Test Results – Again. 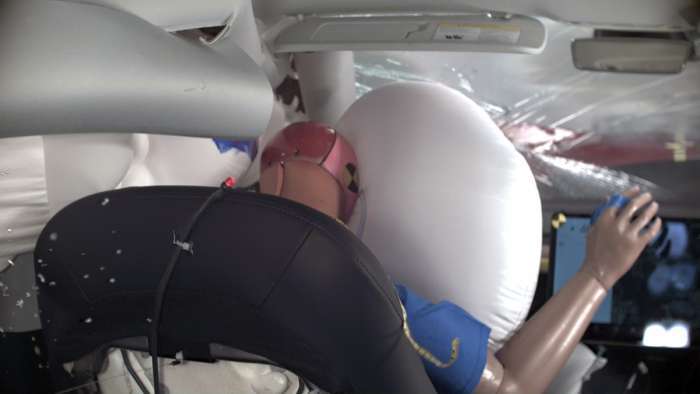 Tesla Model 3 – Why the Delay?
IIHS would have tested the Model 3 shortly after launch, but the Model 3 cars were not available due to a customer waiting list. The Model 3 results still could have been known sooner, but Tesla passed on that opportunity. When planning its calendar, IIHS reaches out to manufacturers to ask if they would like to be included in early testing. Tesla did not respond, and hence, was not moved to this year’s early testing queue. Preliminary testing of the Model 3 disqualified it from the top award, however, Tesla made changes to the headlights and that change made the Model 3 qualify for the award pending crash test results.

How Did The Model 3 Do On Tests?
The Model 3 passed all of its IIHS crash tests with a score of Good. That is the highest score possible. It will not surprise us if the EV-Advocacy media find a way to somehow cast the Model 3 as having done better than other vehicles that have attained this level of safety, but the truth is, other green cars its size have scored just as high. And many are much less expensive. For example, the Honda Insight Hybrid, the Kia Niro Hybrid, and the Kia Niro Plug-in Hybrid. Many affordable sedans such as the Kia Forte and the Hyundai Elantra earn this same rating. Sporty affordable cars like the Subaru Impreza WRX also earn this award. The Model 3 is also not the first battery-electric vehicle to have earned the Top Safety Pick Plus rating. That distinction goes to the Audi e-Tron crossover.

Why Does IIHS Matter If We Have NHTSA?
The reason that many automotive experts consider IIHS testing more substantial than the NHTSA government testing is that IIHS performs its crash tests at higher speeds. IIHS also conducts testing that NHTSA does not. For example, headlight testing and passenger-side small front overlap crash evaluations. One way to think about NHTSA vs. IIHS is junior varsity vs. varsity levels. IIHS does not use any taxpayer funds to conduct its testing. All costs are paid for by a consortium of insurance companies. IIHS purchases the vehicles it tests itself (they are not donated by the manufacturer) and is in its 50th year of operation. You can view the full test results for the Model 3 (and any car tested) at the IIHS website.

Tesla Model 3 Fast Facts:
The Tesla Model 3 is a five-passenger premium/performance battery-electric sedan. The Model 3 has become the dominant vehicle in its segment, previously known as the BMW 3 Series segment. The Model 3 does not just outsell its peers in that class, it is easy to say that it outsells them combined. The Model 3 is also a conquest vehicle for Tesla in that it pulls in buyers across a broad spectrum of vehicle classes.

Now in its third calendar year of sales, the Model 3 line, which has an average transaction price of about $50K, has expanded to include both higher and lower specification and content trims. Tesla’s Model 3 sales in the U.S. reached mainstream levels in 2018, surpassing 20,000 monthly units delivered twice, and topping out at 25,250 units in the month of December. Sales have since declined in America to about half that rate. However, inventory allocation to overseas markets has played a role in that. The Tesla Model 3 is one of the most American-made vehicles overall, and in its segment is clearly the most American vehicle offered. It is assembled in Fremont, California and key drivetrain components are manufactured in Nevada.

Safety regulators and some media outlets have been critical of Tesla's past safety claims. Will this new testing result help silence the critics of Tesla's vehicles?