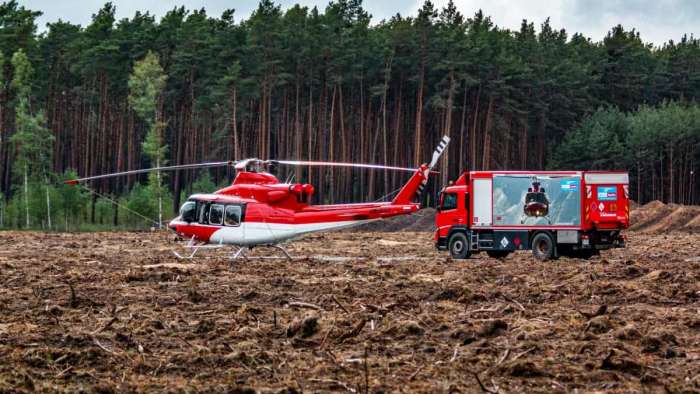 Tesla Gets Approval To Use This Helicopter At Giga Berlin

Tesla has added a medium-lift Bell 412 helicopter from a company called Heli-Australia to aid in the construction of Giga Berlin.
Advertisement

The construction of Tesla’s Berlin Gigafactory seems to be going forward in full steam. The main building has finished most exterior work and Tesla currently seems to mostly be focusing on installing equipment and beginning production.

However, to assist in the remaining exterior work, Tesla has gotten a new addition. Since Wednesday the 12th of May, Tesla has gotten preliminary approval to use a helicopter for chimney installation at the painting section of Giga Berlin.

Watch the helicopter in action at Giga Berlin.

#GigaBerlin
Made a short timelapse of today's helicopter operation on the construction site.
It is very far away, but I was not allowed to fly closer than that pic.twitter.com/9UinKcqs0y

As we can see from the picture a company called Heli-Australia is supplying Tesla with what seems to be a medium-lift Bell 412 helicopter. A quick look at Heli-Australia’s website shows the company specializes in providing flight services for commercial and fire fighting purposes.

The addition of chimneys is a good sign pointing to Tesla finishing construction. Tesla originally said Giga Berlin production will begin in July however, in the company’s latest Q1 earnings report, among many exciting announcements, the EV maker said initial production at Giga Berlin has been pushed to the end of 2021.

Tesla hasn’t said why the production date has been delayed. However, reports from Germany suggest the reason could be bureaucratic red tape.

Tesla continues building Giga Berlin without a final permit and the recent preliminary permit to use a helicopter is the 14th such approval the company has gotten from the Brandenburg state.

And according to the reports out of Germany, Tesla’s decision to include a battery plant in the Giga Berlin plan has delayed the final permit without which Tesla cannot begin production.

However, whether Giga Berlin begins production in July or the end of 2021, it’s nonetheless going to be Tesla’s most advanced factory to date and will play a huge role in the company’s growth.

Giga Berlin is expected to bring a number of breakthrough advancements. Among other things, the plant is expected to incorporate Tesla’s newest 4680 cells with a structural pack.

In addition, the Model Y, the first vehicle that will be produced at Giga Berlin, is expected to have stunning colors that subtly change with curvature.

According to Elon Musk, this will be the most advanced paint shop in the world, and construction of the paint facility with Tesla’s partner Geico Teiki-Shai seems to be progressing well.

So what do you think? Why do you think Tesla needed to use a helicopter rather than a crane? Also, do you think the addition of chimneys is a sign Tesla is finishing up construction work? Let me know your thoughts down in the comments below.