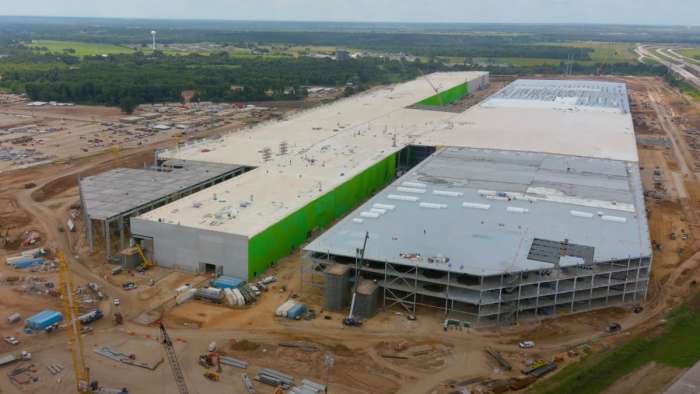 Over the weekend Elon Musk visited the Giga Texas construction site. Musk seems really happy with the construction progress and says the factory will be over a mile long and 7 stories high when complete.
Advertisement

And if we add Giga Shanghai and Giga Berlin to the mix, Giga Texas will be Tesla’s 6th manufacturing site worldwide. However, what sets Giga Texas apart is its colossal size.

The total land area for Giga Texas is 2400 acres. In comparison, Giga Shanghai, Tesla’s China factory, with an annual production capacity of 500,000 vehicles a year, has a total land area of 200 acres.

Despite its massive size, Giga Texas’s construction is still progressing rapidly. According to insider sources, Giga Texas has progressed so far ahead of Giga Berlin that the EV maker is considering building the company’s newest 4680 packs, which are planned to go into the made in Germany Model Ys, in Giga Texas and ship them to Giga Berlin.

Currently, Tesla is only utilizing a portion of the 2400 acres of land to build a factory. Nevertheless, the current factory footprint is still enormous.

Over the weekend Elon Musk visited the Giga Texas construction site and he seems to also be in awe of the factory’s size.

Musk was at the construction site assessing the plant’s progress and according to him, “team [in charge of Giga Texas construction] is making excellent progress. Building will be almost a mile long when complete.”

I was at Giga Texas yesterday. Team is making excellent progress. Building will be almost a mile long when complete.

It’s hard to imagine how big a mile-long factory actually is but, Twitter user Aaron George gives us an idea. George recently drove by the nearly complete Giga Texas construction site, and as he was driving by tried to take a video of the factory.

George says, even though he was driving 85 miles per hour, it still took him almost a minute to record the factory from end to end. Musk in response to the video suggested the final factory will be even bigger saying “length will grow by ~500 ft over time.”

Musk emphasized the plant’s size adding, “the building is ~7 stories tall, so each “floor” is double size. Hard to appreciate unless you’re close.”

The building is ~7 stores tall, so each “floor” is double size. Hard to appreciate unless you’re close.

Length will grow by ~500 ft over time

If Tesla can produce 500,000 vehicles a year in an area one-tenth the size of Giga Texas, it’s exciting to imagine what Tesla will be able to do in 2400 acres of land.

Cathie Wood, and the exchange-traded fund she runs, ARK Invest, believe Tesla will be able to produce 5 to 10 million vehicles a year by 2025.

If Tesla is to achieve these lofty production numbers, Giga Texas will surely play a significant part. According to official documents, Tesla is initially planning to produce a refreshed Model Y at Giga Texas, followed soon after by the Cybertruck.

However, recent leaks suggest Tesla has moved Cybertruck production ahead of Model Y. We have yet to acquire any information on why Tesla made this move but we should know more today when Tesla announces Q2 earnings results.

We will be sure to keep you posted if Tesla releases more information regarding Giga Texas’ production plans with the earnings report. Make sure to visit our site torquenews.com/electric-vehicles regularly for the latest updates.

So what do you think? Excited about Giga Texas progress? Also, would you rather Tesla begin production with the refreshed Model Y or Cybertruck? Let me know your thoughts down in the comments below.

tangible wrote on July 28, 2021 - 2:48pm Permalink
Want to see a mile-long factory? Go see the Boeing facility in Richardson TX building F-35 fighter jets. It's a mile SQUARE. And it's been there for decades.
nunya wrote on December 12, 2021 - 10:57pm Permalink
Um, no. Boeing in Richardson is an absolutely tiny building compared. Besides, the F-35 is produced by Lockheed Martin, in Ft. Worth, and while the production line building is a mile long, it's certainly nowhere near a mile wide, by a very long shot. Tesla's Texas factory will be larger, by a good margin. The building's Phase 1 size is 5.3 million square feet, compared to Lockheed's 4.9 million. Phase 2 additions will make the building even bigger.