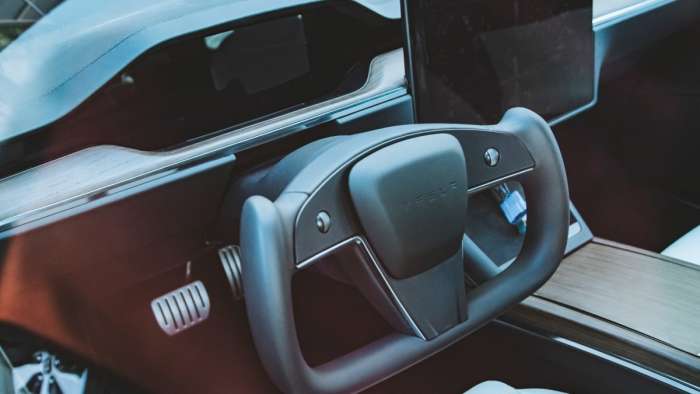 Elon Musk has confirmed the automatic gear selector powered by Tesla AI introduced on the refreshed Model S & X will be coming as an option to all Teslas.
Advertisement

Tesla launched the new Model S and X with several new features. Of those, the most radical change was the two new vehicles came without a gear shifter stalk.

Tesla replaced this crucial part with an AI gear shifter that predicts where the vehicle should go by considering its surroundings, the owner’s schedule, calendar, and the time of day.

For example, if it’s a weekday and the Tesla owner always drives to work in the morning, the car will automatically set the navigation, set the gear, and autonomously drive the owner to work.

Related news: Tesla To Build Model Y 4680 Packs In Texas & Ship Them To Giga Berlin Due To Delays

This was originally met by confusion, however, owners who have taken delivery of the refreshed Model S have reported no issues.

Elon Musk in the past has even gone so far as to claim “after you drive without using a PRND stalk/stick for a few days, it gets very annoying to go back & use a shifter!”

After you drive without using a PRND stalk/stick for a few days, it gets very annoying to go back & use a shifter!

However, despite Tesla’s AI prowess, the vehicle is bound to err now and again. And in that situation, owners can override the vehicle’s automatic gear choice by pressing a button on the touchscreen or by using buttons on the center console.

According to Musk, Tesla will take any input from the driver as a fault and teach the AI to improve. As a result, the vehicle’s automatic gear shifter will improve over time.

This capability was initially supposed to only be implemented in the new Model S & X. However, Elon Musk says automatic shifter will be coming as an option to all Tesla vehicles with FSD.

This includes the previous versions of the Model S & X and Model 3 & Y which were produced starting in 2017 and onwards.

Elon made the announcement in response to Whole Mars Catalog who wrote saying, he made a reservation to a restaurant, his iPhone parsed the confirmation email automatically and added it to his calendar.

And when he got to his Tesla, it started navigating to the restaurant automatically. Whole Mars Catalog says all he needed to do was, pull the gear shifter and FSD took him there.

You don’t even need to touch the shifter in new S. Auto detect direction will come as an optional setting to all cars with FSD.

Whole Mars Catalog is part of the 2000 or so early access Tesla FSD beta testers. As a result, he has access to Tesla’s latest FSD build with surface street capability.

That is why he was able to navigate from his driveway to the restaurant autonomously. According to Musk, Tesla’s latest pure vision FSD will be released to the wider public in roughly 3 months.

Tesla owners who want to try out FSD but can’t afford to pay the extra $10,000 outright and/or are unable to take out a loan can also try out this feature with an FSD subscription which costs $199 per month.

We will keep you posted as Tesla releases more information regarding the rollout of the automatic shifter to all Tesla vehicles. Make sure to visit our site torquenews.com/electric-vehicles regularly for the latest updates.

So what do you think? Excited to get the automatic gear shifter in your Tesla? Will you enable this option or keep using gear shifter stalk? Let me know your thoughts down in the comments below.

For more information check out: Tesla To Deliver Cybertruck Without Side-View Mirrors Suggests $436M Samsung Camera Supply Deal Also, see Elon Musk: Tesla FSD V9 Only Uses Pure Vision On Highways, V11 Will Be The One To Rule Them All

tangible wrote on July 20, 2021 - 6:17pm Permalink
yeah, the owner will spill his/her coffee while fumbling with a gear stalk and put the car in a ditch. AI - the solution to a problem that doesn't exist, except in the Internet Hype machine.