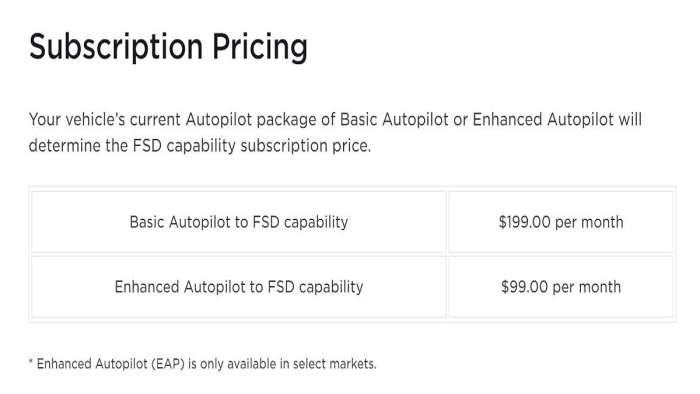 Tesla Releases Subscription for FSD (Full Self Driving) for $199

We have breaking news for Tesla has just released its subscription service for FSD (Full Self Driving). This is good news and means that Tesla is confident that full autonomy is closer than we might think.
Advertisement

Tesla has just updated its website and we are seeing Twitter users posting images and details of Tesla launching their full self driving subscription. It starts at $199 a month. This means that in order for the $10,000 full self driving to be worth it, you will want to own your car for more than 4 years.

This is kind of a bummer for those owners who recently bought a Tesla and the entire FSD package without the subscription who may not own their car for 4 years or more.

FSD subscriptions are only available to eligible vehicles in the United States. Tesla mentions to check the Tesla app for updates.

The nice thing is that you can cancel your FSD subscription anytime and get it for the remainder of the month. Then re-enable it when you want to use it again. Refunds for those who purchased all of Tesla FSD upfront do not appear to be offered at this time.

For those select customer who have the enhanced version of autopilot, they will pay $99 while the rest of us will pay the $199 for the Tesla FSD subscription. Enhanced autopilot is only available in select markets.

There's also the option for older Tesla vehicles to upgrade their hardware, for $1,500, to be able to take advantage of Tesla's vision only system for FSD and to get a Tesla FSD subscription.

DeanMcManis wrote on July 17, 2021 - 9:07pm Permalink
I do think that the FSD subscription service will be a great benefit for people leasing their Tesla, for people who plan to sell their Teslas before 4 years, and for the many people who would want to just try out FSD, to see if it is worth the expense for them. It is a good sign overall that FSD subscription service is coming out soon, because it means that the promise of FSD (outside of beta testing) is coming true soon.
Jeremy Johnson wrote on July 19, 2021 - 9:39am Permalink
Agree. For those short term owners of Tesla vehicles, the subscription will be great. Long term, the up front buy will be better.