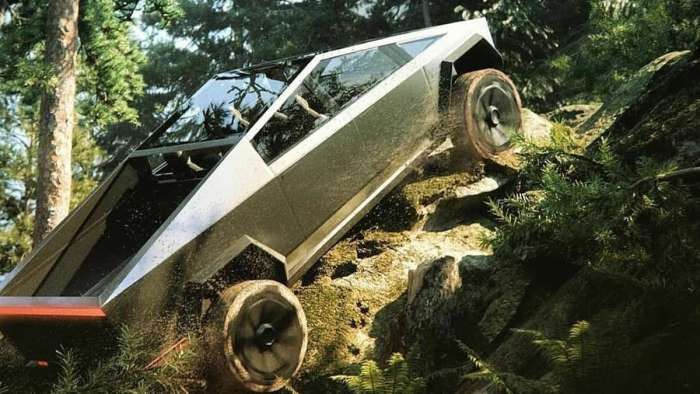 A report out of Korea states Tesla has signed a $436 million deal with Samsung for the latter to supply cameras to be used on EVs. The report also suggests the cameras will be used on the Cybertruck and that the vehicle will not have side-view mirrors.
Advertisement

When Tesla announces new vehicles, the EV maker usually introduces the prototypes without a side-view mirror.

At the Cybertruck unveiling event, Tesla once again showed off the vehicle with cameras in lieu of the side-view mirrors. However, most Tesla enthusiasts expect when customer deliveries begin, the production version of the Cybertrck will add a side-view mirror.

Having said that, according to information coming out of South Korea, this might not necessarily be the case.

Today, The Korea Economic Daily came out with a report stating Samsung has signed a $436 million deal with the “largest US EV maker” to supply the latter with cameras.

Without calling Tesla by name, The Korea Economic Daily writes “The company plans to launch a new EV, which gives drivers a rea rview through a camera equipped on the car, as the model does not have side mirrors. The EV has more than eight cameras for self-driving purposes.”

Even though the article doesn’t mention Tesla and the Cybertruck by name, the description “the largest US EV maker” “the EV has more than eight cameras for self-driving” and “a new EV, which gives drivers a rear view through a camera-equipped on the car” make it abundantly clear the article is referring to Tesla and specifically the Cybertruck.

Concerning the last part, Tesla has confirmed the Cybertruck will have a screen instead of a rearview mirror. This screen will then be fed images from a camera mounted at the rear of the vehicle.

What was however unexpected was, the Korea Economic Daily’s assertion the vehicle in question “does not have side mirrors”.

Tesla CEO Elon Musk in the past has expressed his desire to remove the side-view mirror from Tesla vehicles.

Two main reasons Musk wants to get rid of this part are, one, he believes it takes away from the aesthetics of the vehicles, and two, and possibly, more importantly, side view mirrors add frontal area, drag, decrease range and contribute to wind noise while driving.

If it is at all possible, Tesla undoubtedly would remove the side view mirrors. However, the EV maker still needs to get the go-ahead from the National Highway Traffic Safety Administration (NHTSA).

Per NHTSA’s regulation, all automobiles must have reflective side mirrors with added specifications stating the curvature and positioning.

However, since 2019, the NHTSA has been actively testing the feasibility of removing side-view mirrors and the regulatory body might be preparing to allow this change.

We will keep you posted if Tesla releases any more information regarding this issue.

So what do you think? Will Tesla deliver the Cybertruck without a side-view mirror? If so how do you think that will affect the driving experience? Let me know your thoughts down in the comment below.

Jimmy Dinsmore wrote on July 15, 2021 - 2:26pm Permalink
Will that even clear the safety protocols?