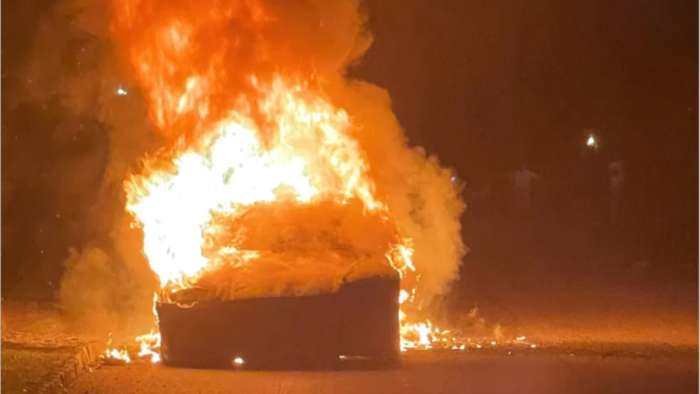 Since the very first electric vehicles, EVs have had disproportionate scrutiny when it comes to battery fires.

Electric vehicle fires, no matter the circumstance or isolated the incidence appears to be, garner worldwide media attention.

One recent example is a brand new Model S Plaid that caught fire in Pennsylvania. The incident garnered sensational media coverage claiming a Tesla was driving down the street autonomously while it was on fire.

Like most EV fires, this one also disappeared into the ether after a brief media circus. However, negative media coverage associated with battery fires still poses a real risk to EV brands. Reports of spontaneous battery fire have a significant chance of landing a death blow to any aspiring electric vehicle manufacturer.

The story of Fisker, which was Tesla’s biggest competition at the start of the last decade is a cautionary tale. The vehicle, after being announced as the original “Tesla Killer” went on to receive several celebrity endorsements.

However, a string of spontaneous battery fires coupled with bad luck has ended the company before it was able to get going.

As a result, all EV manufacturers try to squash any rumors of battery fires as soon as possible. And now Elon Musk also appears to be trying to distance Tesla from spontaneous battery fires that have been reported on GM’s Chevy Bolt EVs.

General Motors is currently conducting a recall of the Chevrolet Bolt electric vehicle due to fires caused by the battery pack.

The recall affects 2017 to 2019 model years and is the second recall for the vehicle, following one issued in November 2020.

According to GM, the battery fires seem to arise when the vehicle is charged fully. As a result, GM has advised owners of affected vehicles to limit their maximum charge to 90% and make sure the batteries are not drained to below 60 miles range.

GM has also instructed owners to not leave their vehicles charging overnight and says “out of an abundance of caution, customers should continue to park their vehicles outside immediately after charging.”

Even though statistically EVs are much less prone to vehicle fires than internal combustion vehicles, such kinds of warnings will undoubtedly make prospective customers fearful and perhaps hold off their purchase.

And Elon Musk seems to be trying to distance Tesla from the Chevy Bolt news. Responding to a Teslarati article about the Chevy Bolt recall, Musk said “large pouch cells undergo significant volumetric changes at high state of charge.”

Even so, fire risk is probably less than gasoline cars. There are over 200,000 combustion engine car fires every year in US alone. It’s literally in the name.https://t.co/uJPlB3IbzQ

Tesla famously only uses cylindrical cells to power its vehicles. One of the reasons Tesla does not use large pouch cells despite their ease of forming into a battery pack is that, as Musk mentioned above, their expansion when charged.

And Musk by mentioning this key difference seems to be hinting that Tesla vehicles don’t suffer from the same issues faced by the Chevy Bolt.

So what do you think? Are you more afraid of fires in EVs than internal combustion vehicles? Also, do you think battery issues can affect Tesla? Let me know your thoughts down in the comments below.

For more information check out: Tesla Planning To Start Production At Giga Texas With Cybertruck, Not Model Y Also, see Tesla Model 3 Draws Comparisons To A Boat After Fording Through A Flood

Keng-Yuan Chang wrote on July 25, 2021 - 5:05am Permalink
Pouch format should only be used by LifePo4 really.
Aren wrote on August 1, 2021 - 12:55am Permalink
Other chemistries can absolutely be used safety in pouch format. Elon's comment is mostly against really big pouch cells. The bolt uses something around 60Ah cells, which can seemingly run into mechanical issues on the bolt. A well designed pack can safely use 5-20Ah pouch cells with mechanical relief between cells to avoid the issues the Bolt is having, while benefiting in increased volumetric energy, greatly increased volumetric/gravimetric power density, and possibly even greater gravimetric energy density.
Keng-Yuan Chang wrote on August 3, 2021 - 5:23pm Permalink
I think 4680 format is the right future direction though, hope more companies go with that.
DMF81 wrote on July 25, 2021 - 7:55am Permalink
I am going to challenge you on the Fisker battery fires. There were Fisker A123 battery failures where the packs had to be recalled. There were Fisker fires, but those were related to the internal combustion engine.. I believe it was a fan short. There were other Fisker fires, specifically in the Port of NJ, due to hurricane Sandy.. Those were related to salt water causing shorts in the electronics (other cars also suffered the same fate)
B Joshia Rosen wrote on July 25, 2021 - 10:52am Permalink
Tesla is using LFP pouch cells for the Chinese short range Model 3s. Is the LFP chemistry sufficiently safer than nickel that it's ok to use pouch cells?
Ben Blackburn wrote on July 26, 2021 - 4:04am Permalink
Do you have a recent source that they are using pouch cells? All I see is the early rumors that seem to assume that because they are using the CATL(?) LFP chemistry that they must be using the pouch cells as well. I can't find any mention of it since that initial rumor phase, and I would think that if it were pouch cells we would have seen a tear down or had other articles since then after they started shipping.
B Joshia Rosen wrote on July 26, 2021 - 8:33am Permalink
I'm basing my statement on those early reports plus an inference that the terrible winter charging performance that Europeans were reporting in the Tesla forums could be due to poorer thermal management. The thermal management in the 2170 cars is superb, the only reason for it to be different in the MIC SR+ would be a different battery form factor.
Ben Blackburn wrote on July 26, 2021 - 5:15pm Permalink
The different chemistry will react differently to temperature I would imagine, so the issue might be that they used the same thermal management system and it's not able to keep up with the cold temperature with the different chemistry? Or maybe they just cut costs on that model not planning on it being in very cold places much.
Kevin Helenius wrote on July 25, 2021 - 2:25pm Permalink
I have a Tesla 3 and I am not concerned about fires anymore than ice vehicles. Perhaps less so.we rarely hear about ice vehicle fires and I believe they are much more volatile.
Bob King wrote on July 26, 2021 - 1:54pm Permalink
I have had a 2017 GM Volt for 5 years now. The battery pack has a cooling system plus it uses a level 2 charger at 3.5 kw . I have no concerns with my vehicle as far as the battery pack goes. I am looking at a new vehicle with a 100 kwh battery pack and it also has a cooling system. Only time will tell but I am not concerned.
John Hall wrote on September 26, 2021 - 6:52pm Permalink
This is why I get mad when I read about Jeremy Rifkin promoting his Third Industrial Revolution which includes people using electric vehicles.He should be taking legal action and demanding a full scale investigation.You think Rifkin would let the Biotechnology industry get away with something like this?Rifkin's all worried about Biotechnology being safe and he's not even questioning the safety of the technology HE'S promoting.