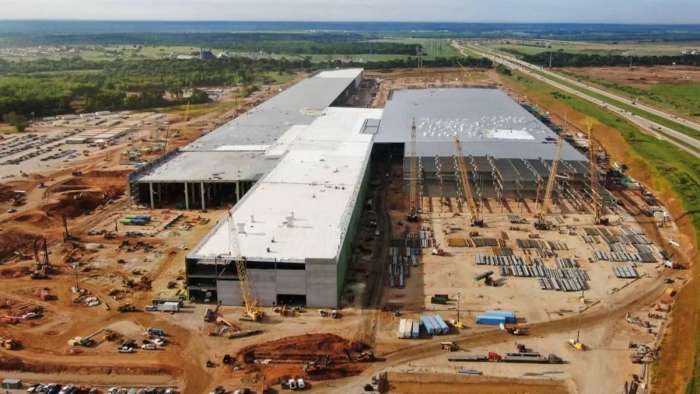 Tesla Planning To Start Production At Giga Texas With Cybertruck, Not Model Y

New leaked information suggests Tesla has changed its Giga Texas plans and is now planning to produce the Cybertruck ahead of the Model Y.
Advertisement

Giga Texas (also known as Giga Austin) is Tesla’s newest factory in the lone star state. The factory is currently under construction and when complete will be by far Tesla’s largest plant.

For comparison, Tesla’s Shanghai gigafactory has a total area of 210 acres, Giga Texas on the other hand has more than 10 times the size with over 2,400 acres.

Currently, Giga Texas’ construction is progressing rapidly and is widely believed to have overtaken Giga Berlin’s construction progress. Giga Berlin began construction several months ahead but its progress has been hampered by several bureaucratic roadblocks.

Latest reports suggest Giga Texas’s construction has progressed so rapidly it will supply Giga Berlin with 4680 battery packs until the latter can support local production.

Giga Texas is also expected to employ a new production technique where tunnels under the factory directly supply parts to the production line. Boring Company equipment was recently spotted at the Giga Texas presumably to build said tunnels.

According to Tesla, Giga Texas is initially expected to produce the new Model Y with 4680 cells and a structural battery pack. And Cybertruck production was expected to follow soon after.

Based on Elon Musk’s Tweet, we believe the new Model Y, with the 4680 cells to be built in Giga Berlin and Giga Texas will have a 474-mile range, better performance, and superior handling.

However, getting back to Giga Texas, according to information recently shared by Troy Teslike, Tesla has apparently shifted its schedule, and now Cybertruck is expected to be the first vehicle to start production at Giga Texas.

I have heard that Tesla is planning to start production at Giga Texas with Cybertruck, not the Model Y.

Troy hasn’t shared the reason behind this move. And on Twitter said, “things are fluid, and plans change quickly and this is the latest plan.” Hinting that Tesla might end up changing back its plans and produce the Model Y first.

Here is my impression:

Things are fluid and plans change quickly and this is the latest plan. However, Model Y is not too far away, maybe 2 months behind the Cybertruck.

As for the Cybertruck itself, Troy says the post-apocalyptic truck will have Tesla’s newest 4680 cells and a structural battery pack built in Texas.

Also, Cybertruck will have 4680 cells and a structural battery pack which will be built in Texas too.

We will be sure to keep you posted if Tesla shares any information regarding the production schedule shift. Make sure to visit our site torquenews.com/electric-vehicles regularly for the latest updates.

So what do you think? Excited that Tesla is planning to produce the Cybertruck first? Also, why do you think Tesla changed their plan? Let me know your thoughts down in the comments below.

DeanMcManis wrote on July 20, 2021 - 4:41am Permalink
I think that the original plan to produce the Model Y first at Giga Texas was because they needed to have a fallback plan for Texas in case production delays slowed the release of the Cybertruck. That way buyers and the press would view the Cybertruck as coming early, and not very late compared to early production goals.
Tinsae Aregay wrote on July 21, 2021 - 10:28am Permalink
That would mean Cybertruck development is progressing nicely. Can't wait to see that vehicle on the road!
tangible wrote on July 21, 2021 - 3:20pm Permalink
Cybertruck doesn't require a PAINT SHOP to be functional.