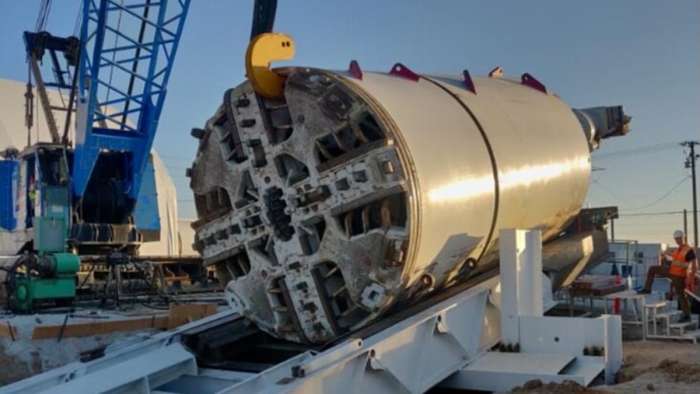 A drone flyover of Tesla's Texas gigafactory has shown The Boring Company Equipment on-site. This could be our first look into manufacturing logistics breakthrough where Tesla starts utilizing tunnels to deliver parts directly to the production floor.
Advertisement

Drone footage of the construction site of Tesla’s Texas gigafactory has revealed The Boring Company equipment on site. The video was shared on Jeff Robert’s namesake Youtube channel. Jeff has been documenting the progress of Gigafactory Texas since construction began back in July 2020.

Briefly, at the very end of his latest video, Jeff flashes a closeup of a large metal container with the Boring Company insignia. The metal tube resembles a water tanker or a tanker of some sort.

The Boring company equipment being in the Texas gigafactory construction site makes sense. Elon Musk in the past has said Tesla will be using The Boring Company tunnels to deliver parts directly to the production floor.

Musk mentioned the plans on Tesla’s Q2 earnings call. At the time, he discussed using The Boring Company tunnel to deliver parts from the seat manufacturing plant to the Fremont factory general assembly area. 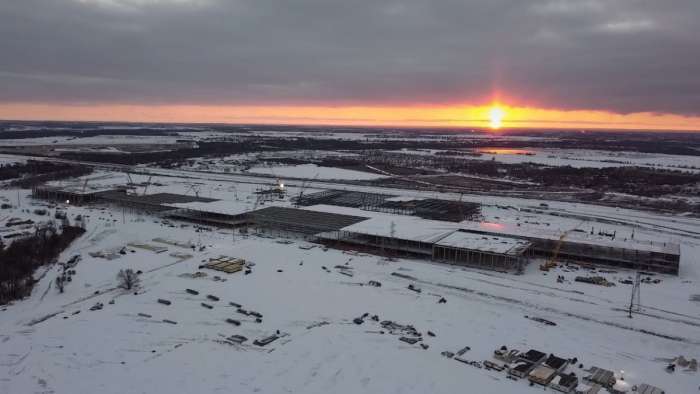 Related news: Tesla China Denies New Vehicle In Development Is $25,000 Model 2, Here Is The Other Possibility

This will be a new era of manufacturing logistics. As is usual with Tesla, the company with its newer factories has iterated on its design and has made several improvements to its subsequent gigafactories. In Giga Shanghai, Tesla has created tens of openings in the sidewall of the factory so that parts could be directly delivered more efficiently to the part of the production line where they are needed.

However, this isn’t the first time Tesla has tried to innovate on manufacturing logistics. During the initial production of the Model 3, Tesla tried to use a number of autonomous robots and conveyors to deliver materials directly to the production line. That system ended up being pulled out and replaced by a manual process after it almost cost the company everything.

Besides a couple of mentions, there isn’t currently much know what the implementation of the tunnels will be at Tesla’s Texas Giga factory. Elon Musk when discussing the Boring Company tunnel has said there could be several tunnels side to side or on top of one another so we can see several tunnels supplying the factory directly.

We will keep you posted as more information comes out. Until then what do you think? Is the Boring Company equipment on-site to start digging tunnels that will supply Giga Texas? Or do you think it is just equipment being shared between Musk’s two companies? Let me know your thoughts down in the comments below.

For more information check out: GM’s New SUV Has Better Range And Is $9,000 Cheaper Than The Tesla Model Y Also, see Elon Musk In Support Of Tesla And SpaceX’s Mission Announces $100M Challenge On Twitter