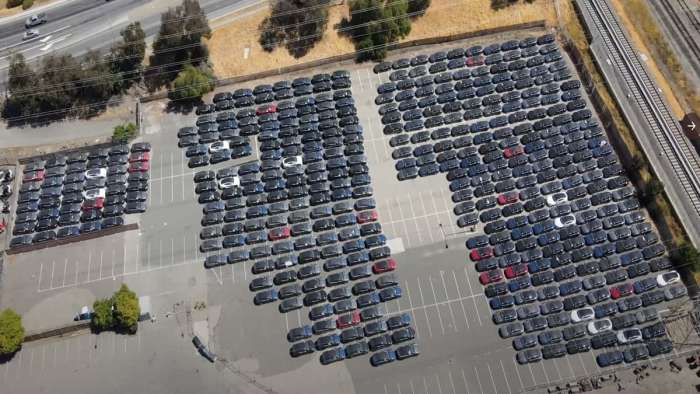 There has been news around Twitter of a parking lot full of Model S Tesla vehicles in Fremont, CA. There has been speculation as to why this is happening. Let's see what people are saying:

Waiting for Chips due to Chip Shortage

Sawyer Merritt sees a chip shortage as a not likely scenario due to Tesla Model 3 and Model Y shipping and not being delayed. However, the S/X may use a different chip set, which could explain the delay in these Model S vehicles.

It could be possible that there is a chip shortage that is causing the Model S vehicles to be delayed, but this doesn't seem like the most likely scenario, otherwise we'd see other vehicles besides Model S.

Not Delaying the Model 3/Y Lines

Ross Gerber thinks that what could be happening is that the Model S vehicles are being held up so they don't interfere with the Tesla Model 3 and Model Y lines and that computer chips are being prioritized for the Model 3 and Y.

They don’t want to mess up y and 3 production lines. So they are holding S until they have the chips. They had fully stopped S production in Q1.

The consensus from Twitter users seems to be that the Model 3 and Model Y should be prioritized as Tesla's leading selling vehicles and that if there is a parts shortage, the Model S vehicles should be delayed. This may also make sense if Tesla is getting close to a wide release of its full self-driving. If that is true, the more vehicles Tesla sells, the better.

According to Tesla Daily, who has been reading the TeslaMotors forum, it's possible a containment hold could be on for about 1,500 Model S and Model S Plaid vehicles. This could be a software update that is needed or some kind of quality check that needs to be done. If there really is 1,500 vehicles, that's a pretty good production rate.

I think this is the most likely answer, that there is a containment hold and that there is some necessary software or hardware updates needed or additional quality checks that requires the vehicles to be on site before they are shipped to customers.

What do you think about the Model S delay for Tesla? Is it due to a containment hold? Is it something else?

Darin Reber wrote on July 23, 2021 - 8:13pm Permalink
I just wish Tesla would be transparent about the reason for the containment hold. Tesla scheduled my delivery of my model S on June 27th and then canceled. Tesla rescheduled on June 30th and then cancelled again with no real explanation. I received the run around indicating that the car was on the truck and it was delayed, then the car was in inspection and then the car was back in production -- Which is it? The worst issue is Tesla made me pay all the money for the car as I was scheduled to take delivery. Still waiting and out close to $90K with no real explanation. Tesla makes great cars, but has pathetic customer support. Tesla really needs to focus on integrity and improving its customer service.