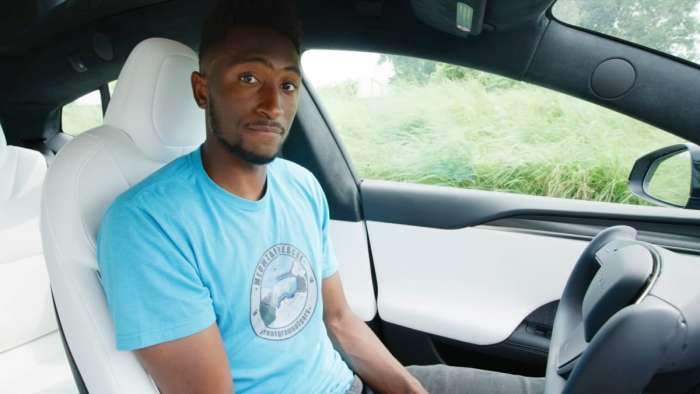 MKBHD, the largest and arguably the best tech reviewer on YouTube has released his first impressions video of the Model S Plaid. In his review, he discusses what he likes and dislikes about the vehicle. Elon Musk addresses his complaints.
Advertisement

Marques Keith Brownlee, better known as MKBHD, is the personality behind the largest tech review channel on YouTube.

His channel, MKBHD, has over 14 million subscribers and draws in millions of views on every single video.

His videos are known for their high production quality, extensive research, and nuanced opinion which make his reviews hold water among consumers.

MKBHD also happens to be a Tesla fan and owner of a 2019 Raven Model S. And just a few hours ago MKBHD released his first impressions video of the brand new Model S Plaid.

The video is entertaining and really insightful, if you can, you should definitely watch it in its entirety. However, if you don’t have 20 mins to spare, below are the highlights.

MKBHD started his video with nothing but praise for the new Model S Plaid. Even though he daily drives the second-fastest Tesla in production, MKBHD was still pleasantly surprised by the Model S Plaid’s performance.

According to Marques, you can feel the performance on your chest and the acceleration is more apparent between 60 miles and 130 miles per hour.

As compared to the previous Performance Tesla Model S, the Plaid Model S can go 60 to 130 miles per hour in 4.7 seconds which is less than half as long as it takes the Performance Model S.

However, MKBHD also had a few minor complaints and one major criticism of the Model S Plaid. One quirky example of how the refreshed Model S could improve was how materials, especially paper or something really thin, can slide between the center console and wireless chargers and disappear.

In his video, MKBHD describes how he lost his car registration paper in the small opening. However, luckily the paper shot out to the back seat when he launched the vehicle hard on the highway.

Another minor complaint was how the steering wheel covers parts of the touch screen and drivers have to pass their hands around the steering wheel in order to press some buttons. Brownlee also said the screen behind the wheel is a bit dim.

However, these are all minor complaints. MKBHD called the Plaid Model S a world-class vehicle in all aspects but one. And the one part it is not is the controversial yoke steering wheel.

MKBHD’s main complaint was Tesla literally reinventing the wheel. This has meant drivers have to retrain their muscle memory learned over years of using a circular steering wheel. According to MKBHD, the relearning process causes initial awkwardness when maneuvering the vehicle.

Marques was however still willing to give Tesla a pass for trying something new and bold. But, he was specifically irked with the capacitive touch buttons on the steering wheel.

These touch buttons are used for most of the day-to-day driving tasks such as turning on the vehicle lights, turn signal, and blowing the horn.

Overall MKBHD says he would still take the yoke steering wheel over a conventional circular one however, he would prefer it, if they came with physical buttons.

Related news: Tesla Model 3 Draws Comparisons To A Boat After Fording Through A Flood

Tesla CEO Elon Musk on his part seems to agree with most of MKBHD’s points on the video. Musk said overall “good review & fair critique.”

In general with interfaces, all input is error. With each software update, the car’s intuition will get better. You will need to press buttons less & less & it will know when to ignore accidental button presses.

Elon Musk also addressed some of MKBHD’s specific criticisms. Concerning MKBHD’s complaints of a part of the screen getting obstructed by the steering wheel, Musk said “in general with interfaces, all input is an error. With each software update, the car’s intuition will get better. You will need to press buttons less & less.”

And as for the steering wheel capacitive buttons accidentally getting triggered Musk said with future updates the vehicle “will know when to ignore accidental button presses.”

Also concerning the screen behind the steering wheel, Elon says “the full self-driving interface renders across the whole display & it is incredible. The yoke enables an unobstructed view of the screen.”

Also, the full self-driving interface renders across the whole display & it is incredible. The yoke enables an unobstructed view of the screen.

Currently, the version 9 beta FSD software has rolled out to Tesla’s 2000 or so Early Access Program participants. The software will be rolled out to the general public including MKBHD’s Plaid Model S with FSD Beta V10/11.

V10 and V11 updates are expected to transition Tesla’s FSD software to a system that only uses the cameras and no longer requires radar to understand the surrounding.

MKBHD says this is only his first impression, he will have a more detailed review after he has driven the vehicle more extensively. We will be sure to keep you posted when MKBHD releases his more in-depth review. Make sure to visit our site torquenews.com/electric-vehicles regularly for the latest updates.

So what do you think? Do you agree with MKBHD’s assessments of the Model S Plaid? What are some of your favorite and list favorite features about the vehicle? Let me know your thoughts down in the comments below.