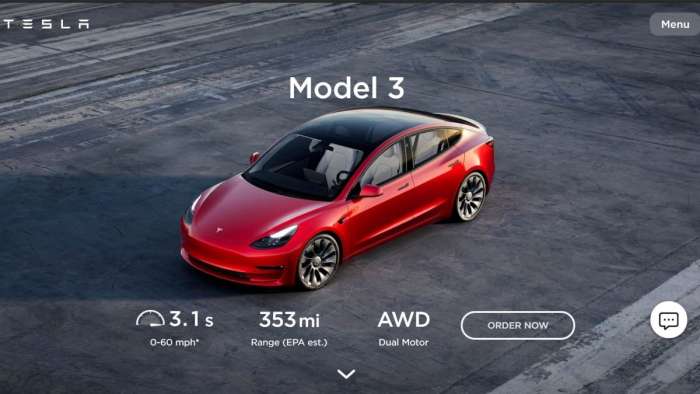 A person with a reliable track record of obtaining insider information from Tesla claims his sources have told him, Tesla is planning to discontinue the Model 3 after the $25,000 compact car (Model 2) begins production.
Advertisement

Currently, Tesla has two brand new compact vehicles under development. The first vehicle’s development is already underway and is being undertaken by Tesla China. And according to leaked information, the vehicle will begin limited production by the end of this year.

Another vehicle under development is the $25,000 compact car Tesla partially announced at the company’s Battery Day event.

According to Tesla, this vehicle will be unveiled to the public in 2022, however, it’s not yet clear when it will begin production. Tesla expects the vehicle to be the main car for the company’s upcoming robotaxi network.

The vehicle is also expected to come with Tesla’s breakthrough technologies which include the 4680 cells and a structural battery pack.

This vehicle, when it comes to production is expected to be the most affordable Tesla replacing the Model 3’s current position. However, according to plans Tesla shared at the Battery Day event, the $25,000 car is not expected to replace the Model 3 but rather will be sold side by side to the mid-sized luxury sedan.

However, a new rumor according to Tesla Twitter personality and Elon Musk’s friend Whole Mars Catalog, suggests that Tesla is planning to discontinue the Model 3 after the introduction of the compact car.

Whole Mars Catalog has tried to confirm this rumor directly from Elon Musk however the Tesla CEO has yet to respond.

that’s what we heard…

Due to the significant shift in strategy the rumor is claiming, and the counterintuitive nature of the claim, it’s hard to believe it to be true short of Tesla or Elon Musk directly coming out and saying so.

Even Whole Mars Catalog, who heard the claim from his sources doesn’t seem too convinced and is still looking to confirm the rumors either one way or the other.

Even though the Model Y is fast approaching to take its throne, the Model 3 is still by far Tesla’s best-selling vehicle. And it doesn’t make sense why Tesla would decide to discontinue the largest contributor to its bottom line.

Some on Twitter have tried to find clues to support this claim. The first is that Tesla hasn’t said anything about giga casting for the Model 3. Giga casting, if you are unfamiliar, is a new manufacturing technique developed by Tesla that significantly decreases parts that make up the chassis of the vehicle.

Giga casting improves the stiffness and handling of the vehicle and decreases complexity and manufacturing cost. Tesla has said going forward all vehicles will need single-piece front and rear casting in order to have Tesla’s next-generation 4680 battery cells and a structural battery pack.

However, despite Tesla integrating the single-piece rear casting on the Model Y and saying this manufacturing process will also go into the Giga Berlin and Giga Texas made Model Ys and the Cybertruck, Tesla hasn’t said anything about the Model 3.

This is certainly odd, however, one simple explanation is Tesla does not want to shut down the Model 3 production line for an extended amount of time in order to make the significant upgrades necessary to install a giga casting machine.

Elon Musk in an interview with Sandy Munro previously stated upgrading the Model 3 chassis to a single-piece cast part is like “trying to upgrade a plane mid-flight.”

Interestingly enough Sandy Munro believes Tesla shouldn't build the upcoming $25,000 compact vehicle as it will be difficult for the company to make a profit at that price point.

Another theory going around the Twitter-verse is, owners are getting really high quotes from Tesla when they trade in their Model 3. Some even to the point the price they have been quoted is enough to buy a brand new Model 3 of the same trim.

This has led some to speculate Tesla is offering these high trade-in quotes cause the Model 3 will soon be discontinued which will increase its demand and cause prices to go higher.

In my opinion, this seems a bit far-fetched. Let me know what you think about this theory down in the comments below.

Ultimately we will know if the rumors are true if Tesla or Elon Musk comes out and makes a comment. We will be sure to keep you posted if we hear further information. Make sure to visit our site torquenews.com/Tesla regularly to get the latest update.

So what do you think? Do you think Tesla will discontinue the Model 3? If so would that make you more likely to purchase a Model 3 soon? Let me know your thoughts down in the comments below.

tangible wrote on August 2, 2021 - 11:51am Permalink
I think it's a ploy to gauge customer sentiment. Elon's team wants to figure out where to invest next - a low end runabout to then cover all market segments, or a refresh on the M3.
DeanMcManis wrote on August 3, 2021 - 8:53pm Permalink
Ah, internet rumors. No, it would never happen. What could possibly happen is that Tesla may drop their lowest priced Model 3 SR once the far cheaper $25K Model debuts. But even that is not a good idea. The M3 has a solid segment of the market, and it is profitable. This rumor sounds more like some internet chatter from people who are trying to stir up controversy while we wait for changes to the Model 3, or hear some solid news about the upcoming $25K model. People who start these narrow minded rumors are not thinking about the greater competitive market against gas powered vehicles, which currently dominate new car sales. Or the rumor could have been started by rivals trying to make Tesla look foolish. Nobody thinking straight would choose to offer fewer profitable models. In fact I think that there may eventually be 2-3 versions of Tesla's $25K entry-level EV, for the Asian, European and American markets (in addition to the Model 3 and Y of course).