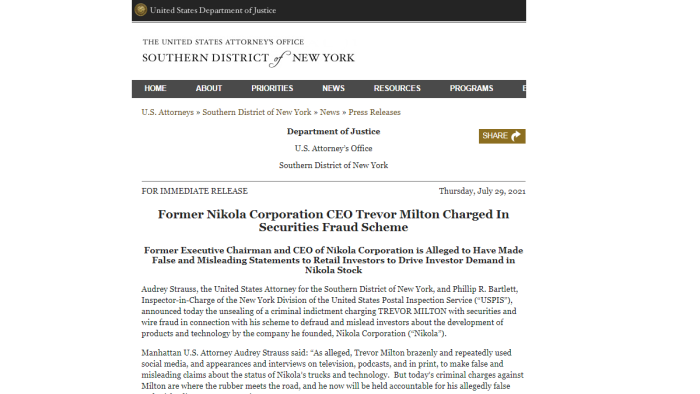 The Department of Justice reports that the U.S. Attorney’s Office for the Southern District of New York arrested Nikola founder Trevor Milton and charged him with three counts of fraud. While much of the media has focused on two securities fraud indictments, Milton was also charged with wire fraud.

Manhattan U.S. Attorney Audrey Strauss said: “As alleged, Trevor Milton brazenly and repeatedly used social media, and appearances and interviews on television, podcasts, and in print, to make false and misleading claims about the status of Nikola’s trucks and technology. But today’s criminal charges against Milton are where the rubber meets the road, and he now will be held accountable for his allegedly false and misleading statements to investors.”

Related Topic: It's Been This Many Years Since Tesla Promised the Roadster, Cybertruck, and Semi

The indictment claims that Milton made these false and misleading statements regarding Nikola’s products and capabilities to induce retail investors to purchase Nikola stock. As far as Torque news could find, Nikola has never delivered an electric vehicle to a consumer or corporate client.

You can jump to the Department of Justice page for all of the official details here.

To view a twelve-minute breakdown on the issue, and to hear scathing criticism of Nikola and its founder, see the above video.

Torque News will bring you more details as they emerge. This topic has been covered by the Wall Street Journal, CNBC, Reuters, and other mainstream news media outlets if you prefer opinion from journalists on this subject.