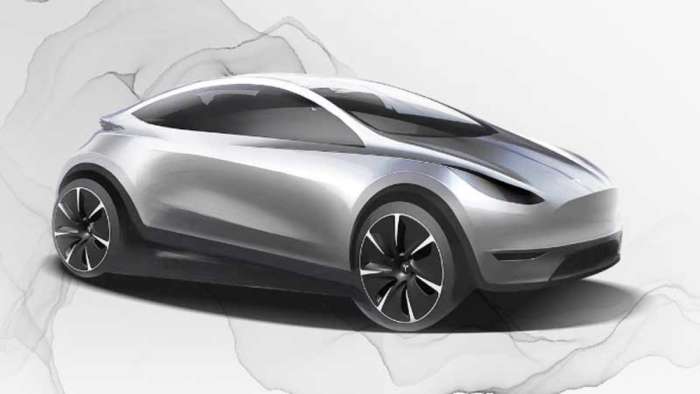 A new rumor out of China suggests, before the end of 2021, Tesla will begin limited production of a brand new compact vehicle designed in China. From previous leaks, we believe the vehicle will be based on the Model 3 chassis.
Advertisement

Back in 2019, at the opening ceremony for Giga Shanghai, Elon Musk said Tesla is looking to hire engineers to design and manufacture a brand new vehicle in China. Musk said the vehicle will not only be sold in the local market but will also be exported to other countries.

At the time, Tesla China held an open competition to choose the design of the new vehicle. Tesla China released a sketch of a compact vehicle, the one you see above when announcing the competition.

Since then, there have been sporadic reports claiming Tesla has begun the development of a new vehicle in China.

The initial somewhat concrete evidence supporting this rumor came in a leaked environmental impact assessment the EV maker submitted to the Shanghai government.

In the environmental application, Tesla also added more details saying it will be using the current Model 3 and Y production facilities at Giga Shanghai to test out “a new model’s early start-up-related test and research work.”

According to the application, these early development works include “the test of important equipment and production processes, product size verification, and matching of parts and functions.”

This information was still from a leaked source with no way to verify the authenticity of the documents.

However, we got our first confirmation Tesla is looking to start production of a brand new vehicle in China in a February 2021 interview Tesla China head Zhu Xiaotong gave to Xinhua news agency. In the interview, the Xinhua Journalist asked Mr. Zhu about the new R&D center Tesla is building in China.

In his response, Zhu said “this center is in the Tesla Lingang Gigafactory, where we are now. We are now building our China R&D center right here. This R&D center is also the first Tesla R&D center outside the United States. The research and development center has all necessary disciplines, covering vehicle design, vehicle engineering, vehicle development, and vehicle testing, etc.”

Concerning the opening date, Zhu said “we now expect it to be up running in the middle of this year [small odds to be "end of the year"] It has more than 20 professional laboratories. We will provide very good conditions to facilitate our R&D Engineers working towards our ultimate goal.”

Finally, Zhu added “The ultimate goal has been mentioned on many public occasions. In the future, we want to design, develop and produce an original model in China. It is manufactured here and sold to the whole world. This R&D center is the starting point of the goal.”

After this interview, we haven’t heard more information about the China developed and manufactured compact vehicle. However, we now have a Chinese source with a very good track record of leaking information from Tesla China saying the vehicle is expected to begin trial production by the end of 2021.

The source also claims the prototype has been completed & most component suppliers have been lined up.

The elusive cheaper compact Model Whatever may come sooner than you think. The prototype is said to have been completed & most component suppliers have been lined up. Trial production has been planned for the end of 2021. pic.twitter.com/ZCRDfc58kf

Since we only have one source, it’s still difficult to unequivocally claim the vehicle will begin production by the end of this year.

However, if we put this rumor into context with the information revealed by Tesla’s environmental assessment application, Tesla China head Zhu Xiaotong’s comments, and a recent addition to Tesla’s earnings report which stated “a new compact vehicle is in development”, the rumor starts to make more sense.

Having said that, there is still so much we don’t know about the new vehicle. When rumors started to circulate regarding the new China-developed vehicle, most, including myself thought the car will be Tesla’s upcoming $25,000 compact vehicle the company announced at the Battery Day event.

However, that vehicle is expected to include several new innovations such as a 4680 cell and a structural battery pack. The development for these breakthroughs is still ongoing at Tesla’s headquarters in Palo Alto California.

What is more likely is, the China developed vehicle is a compact car based on the Model 3 chassis. And we have some evidence in support of this claim.

One is in the same environmental application Tesla filed with the Shanghai government, the EV maker said the new vehicle under development is based on the Model 3 chassis.

And two, Tesla China in a response to a Shanghai-based news site has also said, “the rumors claiming the new vehicle under development is the $25,000 vehicle are false.”

We will be sure to keep you posted as we get more information regarding the pricing and the details of the China-developed compact car. Make sure to visit our site torquenews.com/Tesla regularly to get the latest updates.

So what do you think? Excited about the new compact vehicle? Also, with Giga Texas, Giga Berlin, and the new plant at Giga Shanghai coming online by the end of the year, how do you think 2022 will turn out for Tesla? Let me know your thoughts down in the comments below.

Johan Nel wrote on August 2, 2021 - 11:24am Permalink
Ugggh...I'm a huge Tesla bull but this is getting ridiculous. Tesla has a long way to go to bring 4680's to market. It has 2 new factories to be opened and production scaled. Using a LOT of new technology and batteries that does not exist yet (outside of trial production). And Tesla still has to bring the Semi, Cybertruck AND Roadster to production. And now they will start production on a yet ANOTHER NEW design??? 4680s are not going to be scaled until late H2 next year. So forget Semi and CT volume production until then. And people will lose it if Tesla does not deliver those cars first. That being said, bringing a cheaper Tesla to market is preferably. The time is right. But can Tesla juggle all these balls with so many unmet deliverables on the table? Basically I hope they can do it, but I think this is a total bogus rumor.