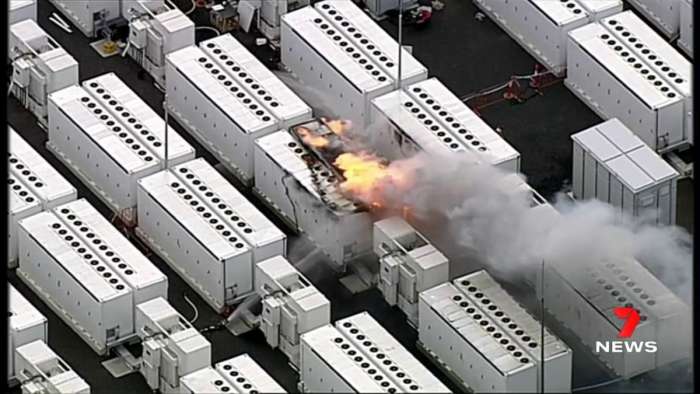 A fire has been reported at Tesla's latest and largest Megapack project in Victoria, Australia. The fire is still raging on and Fire Rescue Victoria says drones have been deployed to aid in the extinguishing effort.
Advertisement

Fire has been reported at a recently operational Tesla battery storage site in Victoria, Australia. The project, named Big Battery is Australias’ largest energy storage facility and has a 300MW/450MWh capacity.

According to reports from Channel 7 which is reporting from the site, the fire began on Friday around 10:15 a.m. local time. The fire has currently engulfed one Megapack and from images looks to have damaged several Megapacks nearby.

The Megapack is Tesla’s largest stationary battery storage system. According to Tesla, a Megapack can store 3MWh (3000KWh) of electricity and comes standard with integrated modules, inverters, and thermal systems.

Tesla sells Megapacks to large utility-sized projects, which in turn use the stored energy to stabilize the grid. According to Tesla CEO Elon Musk, stationary storage in TeraWatt hours is necessary to transition the electric grid to sustainable energy.

And Elon Musk believes the Megapack’s size, flexibility of deployment, and cost per kilowatt-hour make it the best stationary storage product to transition the grid to renewable energy.

Prospective customers seem to also agree with Musk’s sentiment. According to Tesla, the Megapack is so in demand, the product is sold out until the end of 2022.

Tesla sells the Megapack for a million dollars apiece and from the picture above we can see several million in damages. However, more important than the financial cost of the current fire is, the fire’s potential to dissuade people from installing a Megapack.

Battery fires are known to land a death blow to any product, the Galaxy Note 7 and Fisker EV fires are notable examples. That’s why a battery fire is the biggest existential fear for any product manufacturer containing batteries.

Elon Musk recently distanced Tesla vehicles from a Chevy Bolt fire, and the ensuing vehicle recall being conducted by GM.

Having said that, it’s still too early to say what the lasting damage from this fire will be. The information we know so far from Fire Rescue Victoria (FRV) is that firefighter crews wearing breathing apparatus are working to contain the fire and stop it from spreading to nearby batteries.

Related news: Tesla AI Day - What Are We Going to See?

FRV assures individuals nearby that “there is currently no threat to the community though residents and motorists will notice smoke in the area. An Advice message has been issued.” FRV finally says crews are expected to be on-site fighting the fire for several hours.

We will keep you posted as more information comes out about the fire. Make sure to visit our site torquenews.com/Tesla regularly for the latest updates.

So what do you think? Do you think sabotage is behind the fire? Also, what kind of lasting damage do you think the Big Battery fire can have on Tesla? Let me know your thoughts down in the comments below.

For more information check out: Elon Musk Responds To MKBHD’s Tesla Model S Plaid Praise & Criticism Also, see It Is Surprising Most Car Dealerships Don't Have Their Own Version Of Tesla Service