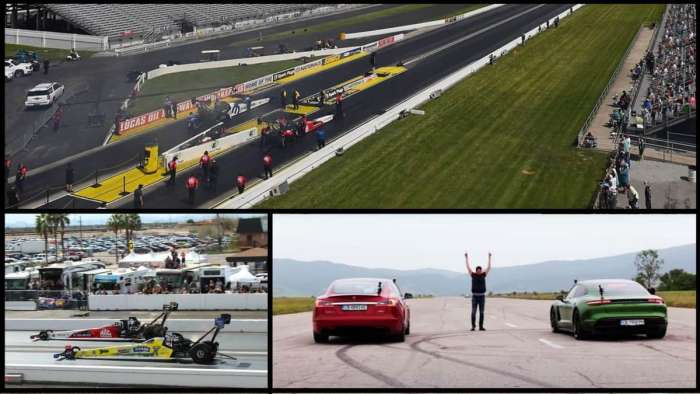 NHRA To Welcome EVs To The Summit Series

Performance EVs, like the Porsche Taycan, Ford Mustang Mach E, and Tesla Model S boast impressive acceleration statistics. This simple fact is undeniable and, as a result, the National Hot Rod Association, or NHRA, has decided to open its doors to electric vehicle owners who want to show off their skills at controlling that acceleration starting soon, in 2022.
Advertisement

The future of racing is dependent upon the future of cars, and the future of cars is electric, for better or worse. Because fossil fuels are not renewable, and their combustion typically produces some fairly toxic compounds, engines that burn them are falling out of vogue. Most automotive manufacturers have decided to phase out their gas-burning line up, introducing more electric models as they retire the old tech. As more countries adopt more stringent emissions standards, fewer and fewer vehicles will be able to be produced with gas burning motors, and many motorsport enthusiasts fear that electrification and emissions standards will end their fun.

The National Hot Rod Association has been at the heart of American drag racing for the better part of a century, getting its start in 1951. Drag strips associated with the legendary governing body have seen many electric vehicles in the past few years, strictly in a fun or testing setting, but soon, the EV Class will be able to compete in the NHRA Summit Series.

The NHRA Summit Series will allow EV drivers to potentially take home not just the satisfaction of thoroughly thrashing an opponent on the drag strip but also the trophy, jacket, and purse associated with winning a major racing event. It will be interesting to see how the 2022 season unfolds, with electric vehicles being able to compete in all seven of the NHRAs divisions. 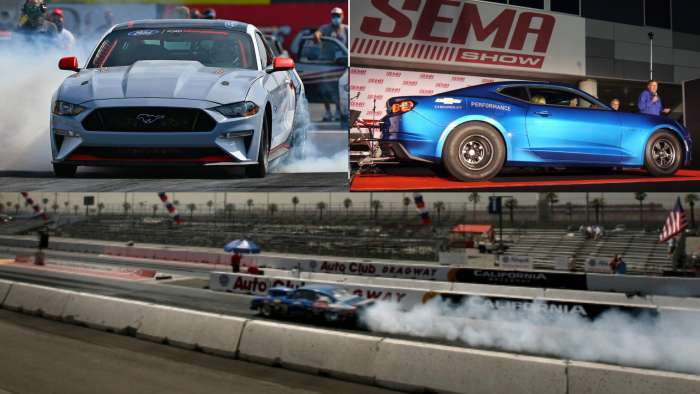 It’s been said that the first car race happened within minutes of the second car being built, and that isn’t hard to believe that claim. With competitive streaks wider than the drag radials that they race on, humans have always loved to test their own limits and the limits of whatever mode of transportation they’re utilizing.

As more and more vehicles are electrified, we’ll see more racing associations create niches for them and they may even edge out ICE events in popularity. It’s my belief that the NHRA choosing to allow electric vehicles to compete against their gas counterparts can only help nudge automotive enthusiasts towards accepting EVs as vehicles like the Ford Mustang Cobra Jet 1400 or the Chevrolet eCOPO Camaro promise to hold their own against Dodge Hellcat powered beasts.

Street races and even some real track events have led to some entertaining losses by ICE powered vehicles to various models of EV, and the skill of the driver is still a determining factor in the outcome of any race. The NHRA has hosted many famed and fabled drivers, like Don Garlits from my home state of Florida, and until now those drivers have piloted gas-guzzling machines.

The Chevrolet eCOPO Camaro concept car was fitted with a Turbo-Hydramatic 400, a 3-speed automatic transmission that is purpose built for drag racing. I’m excited to see what kinds of fun gearbox upgrades we will see down the road as EV-driving competitors join in the fun of drag racing competition. New and more amazing technological feats are achieved each day and I have to say, it’s amazing getting to watch electric vehicle technology evolve. Seeing the world go from the Toyota Prius to something like the 1000 horsepower GMC HUMMER EV Truck, or the supposed 1300 horsepower of the BMW iM2, it’s just astounding.

A new renaissance of cars is on its way and while it may be lacking a 3 pedal setup; it does seem to at least have some hope of being integrated alongside current vehicles to help nudge us gas-for-blood gearheads towards accepting the near-silent powerplant of the future. As it stands, I look forward to seeing how many EVs take home a trophy in the 2022 NHRA Summit Series.