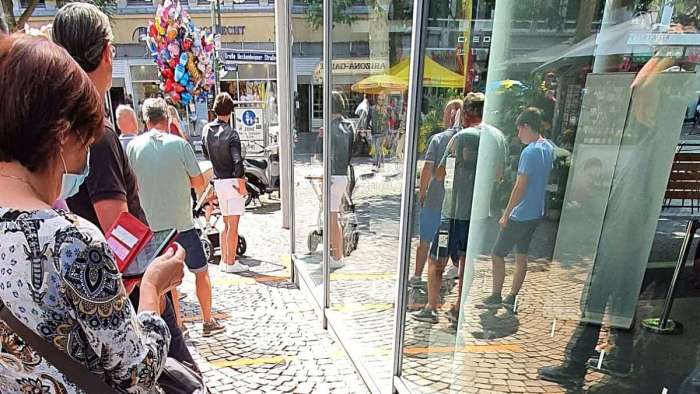 Long lines are being reported at European Tesla stores, as Tesla enthusiasts line up to get their first glimpse of the all-electric crossover the day Tesla starts delivering Model Y to Europe.
Advertisement

Consistent with Tesla’s strategy of localizing vehicle production at least to the Continent they will be sold in, the EV maker initially hoped to begin Model Y deliveries in Europe only once the company’s Grundehiede Germany factory became operational.

The Model Ys which are currently being delivered to European customers are made in Tesla’s Shanghai Gigafactory and shipped out to various European countries.

However, shipping made in Shanghai Model Ys to Europe is somewhat of a conciliatory move by Tesla for European Model Y reservation holders as Giga Berlin made Model Ys are expected to be the refreshed version of the vehicles with the newest 4680 batteries and a structural battery pack.

Elon Musk recently said the refreshed Model Y will be the most advanced Tesla with two-thirds of the vehicle’s body made from a single piece cast of aluminum.

However, Europeans still seem overwhelmingly excited to get their hands on the “regular” Model Y. According to reports coming out of Germany, Tesla enthusiasts have been lining up for an hour to get their first glimpse of the Model Y.

Tesla fans who were lucky enough to inspect the vehicle up close say the made-in-China Model Y has a noticeably better fit and finish as compared to previous vehicles shipped out of Tesla’s Fremont California plant or made in Giga Shanghai Model 3.

Germans line up at the Frankfurt Tesla showroom and wait for an hour to see the Model Y https://t.co/QLuAoI3Uc4

Some owners have even gone so far as to claim, the GigaShanghai made Model Y has better quality than any other vehicle from any other auto OEM.

This is good news for Tesla considering the EV maker has said going forward Giga Shanghai will be Tesla’s primary vehicle export hub.

And Tesla’s highest quality vehicle being the Model Y is also good news for the EV maker’s continued success as Elon Musk has said in the past that he expects the Model Y to be the best selling vehicle in the world by 2022 that is EV or otherwise.

Currently, the most selling vehicle in the world is the Toyota Corolla with over 1.1 million units being sold annually. And if Tesla is able to sell more Model Ys than Toyota Corolla, it will be incredible to imagine what kind of contribution it will have to Tesla’s bottom line.

And that is not taking into account the positive impact replacing 1.1 million ICE vehicles yearly with electric vehicles will have on the environment.

We still don’t know how long Tesla expects to ship made-in-China Model Y to Europe before finally switching to Giga Berlin production. We will keep you posted once we get more information regarding Tesla’s plans. Make sure to visit our site torquenews.com/Tesla regularly for the latest updates.

So what do you think? Excited that Tesla has begun Model Y deliveries in Europe? Also, would you rather wait for the refreshed Model Y made in Giga Berlin? Let me know your thoughts down in the comments below.