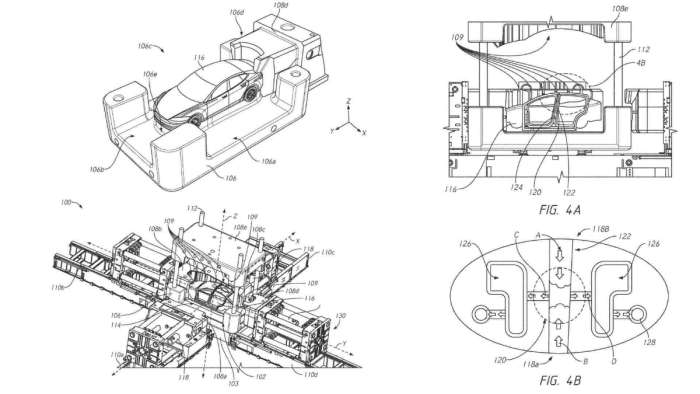 Elon Musk has confirmed the refreshed Model Y, which will be produced at Giga Texas, and Giga Berlin will have two-thirds of its body made with a Giga Press.
Advertisement

Tesla is currently in the final stages of bringing a refreshed Model Y to production. The vehicle when it begins production is expected to incorporate Tesla’s newest advancements announced at the company's Battery Day event.

In a previous article based on Elon Musk’s words, we estimate the new Model Y will have a 475-mile range.

These include the newest and larger 4680 batteries with a tabless design. 4680 batteries, so named because of their dimension, 46cm by 80cm, are significantly more energy-dense and cheaper to produce.

Their cost advantage is not only limited to the cheaper raw material they use but they also require a smaller footprint factory and fewer steps to assemble into a cell.

This allows Tesla to decrease the car’s mass at the same time it improves the vehicle’s stiffness and handling. An important first step to enable a structural battery pack is the ability to build the front and the rear of the vehicle from a single cast part.

Single piece casting is necessary because the batteries are weight-bearing and unless the weight of the vehicle is linearly dispersed, few batteries could be under immense pressure possibly causing damage to the cells.

Currently, Tesla utilizes several Giga Presses at the company’s Fremont California and Shanghai plants. The use of this equipment has allowed Tesla to decrease parts in the rear of the vehicle from 70 to 1.

However, Tesla only uses the gigantic single cast part in the rear of the current Model Y. This means Tesla still needs front casting to enable a structural battery pack.

And now Elon Musk asked if all Tesla models will eventually have their own casting machine to press full chassis, Musk answered saying “all models do make use of aluminum casting, but new Y will be most advanced with 2/3 of body cast.”

All models do make use of aluminum casting, but new Y will be most advanced with 2/3 of body cast.

Speaking at the earnings call Musk said Tesla might not necessarily use the 4680 cells in the new Model Y. At the time Elon stated that Tesla has already devised an alternative plan to produce the new Model Y with the current 2170 cells.

It’s nice to hear at least the plan to use front and rear casting in the Model Y will not change.

We will keep you updated if Tesla releases more information regarding the issue. Make sure to visit our site torquenews.com/Tesla regularly to get the latest update.

So what do you think? What kind of improvements are you expecting from

DeanMcManis wrote on August 15, 2021 - 2:11am Permalink
Hopefully Tesla will get their 4680 battery production scaled up to support the new Model Y. The cast frame and structural pack will improve the Model Y across the board from reduced production costs to a more solid EV. I don't think that the new Model Y's EV range will be anywhere near 475 miles. I think that it may top out around 400 miles. Nobody is even close to that capability now, and it would make more sense for Tesla to hit 400 miles, and have a smaller battery pack. Saving cost and weight.
Paul wrote on August 15, 2021 - 9:05pm Permalink
"46cm by 80cm" Are you sure about that?
gery s katona wrote on August 16, 2021 - 11:22am Permalink
Sounds like they could be trying to do too much at once which is risky. The 4680's alone are going to be difficult.
Mark wrote on August 16, 2021 - 2:39pm Permalink
The fact that they have a plan B for 2170 cells is a sign of good management. Adaptability and flexibility is the killer app for the modern business.
Lisa wrote on September 12, 2021 - 1:03am Permalink
Will the new battery come out this year? I preordered for a January delivery but will delay for better range.
ctuna wrote on November 2, 2021 - 1:12pm Permalink
I don't think there will be any visibility till next year on the 4680 and when an which cars will get it first is still a toss up. But they already said it will be Texas and Berlin plants that get it first. And not in volume till the end of next year at most. The nightmare is they are producing several battery types at the same time an you are not able to specify which you get. Maybe they will have the electric car rebate figured out by Christmas.