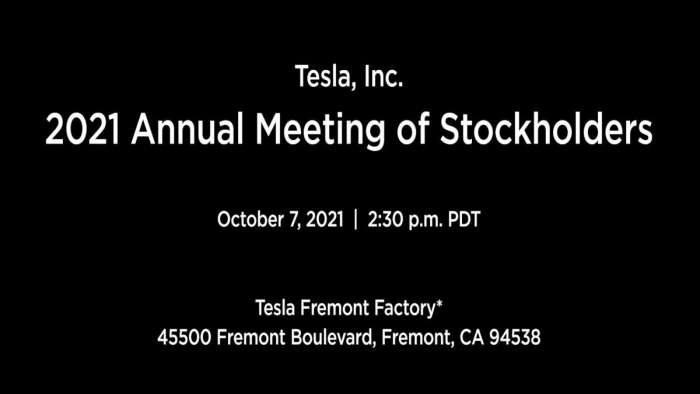 We have news of Tesla announcing its 2021 annual shareholder meeting. There will be a variety of issues discussed at this meeting, so let's get right into it.
Advertisement

Tesla's 2021 Annual Meeting for stock shareholders will take place on Thursday, October 7, at 2:30 PM PST, at the Fremont, CA Gigafactory. The 2021 shareholder meeting will be available online.

Here is the agenda for the 2021 annual Tesla shareholder meeting with current proposals of "FOR", "AGAINST", or "NONE"

A Tesla proposal to elect two Class II directors to serve for a term of three years, subject to the approval of Proposal Two, or until their respective successors are duly elected and qualified
"FOR"

A Tesla proposal to ratify the appointment of PricewaterhouseCoopers LLP as Tesla's independent registered public accounting firm for the fiscal year ending December 31, 2021
"FOR"

A stockholder proposal regarding reduction of director terms to one year, if properly presented (“Proposal Five”).
"AGAINST"

A stockholder proposal regarding additional reporting on diversity and inclusion efforts, if properly presented.
"AGAINST"

A stockholder proposal regarding reporting on employee arbitration, if properly presented
"AGAINST"

A stockholder proposal regarding assigning responsibility for strategic oversight of human capital management to an independent board-level committee, if properly presented.
"AGAINST"

A stockholder proposal regarding additional reporting on human rights, if properly presented (“Proposal Nine”).
"AGAINST"

Tesla will continue to monitor health protocols and recommendations by various governments and adjust the 2021 shareholder meeting if needed. Tesla will communicate this in advance if they do.

What do you think about Tesla's 2021 shareholder meeting? Will we see any special announcements?