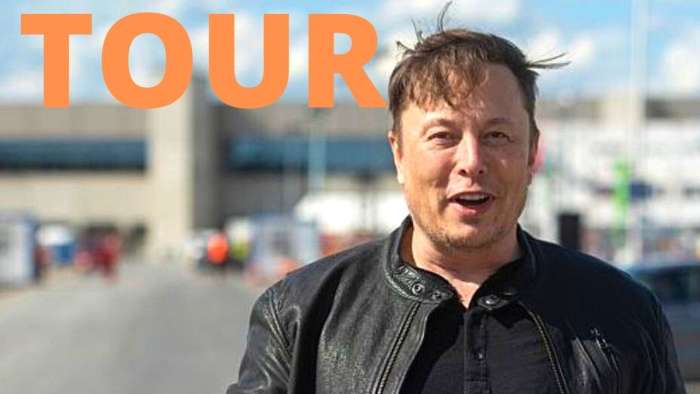 Tesla CEO Elon Musk Announces Giga Berlin County Fair and Tour. He talked about who will be given priority at Giga Berlin’s fair and factory tour and met Germany’s leading Chancellor candidate at Giga Berlin, who called the factory as model investment for Germany.
Advertisement

In the meantime there are a lot of interesting developments around Tesla Giga Berlin. Germany’s leading Chancellor candidate Armin Laschet called Tesla Giga Berlin a model investment, saying Tesla is setting a point in Europe, and I am sure that many companies will settle around Grünheide, which in turn will bring new jobs.

On his website, Laschet indicates that he seeks climate protection through innovation and competition. Three objectives are listed under the heading:

Tesla Gigafactory Berlin seems to fit Laschet’s goal to strike a balance between climate protection and encouraging the growth of Germany’s economy.
“We all experience how difficult it is at the moment, how many protests there are,” Laschet noted, speaking about Tesla’s Berlin factory. “But such a decision, if it had passed Brandenburg by, would have been a loss for decades.”

The CDU chairman spoke out on the side of company boss Elon Musk for a change in the collective action rights. "It is not acceptable that someone who is not affected as a local resident here, but lives by the North Sea or the Bavarian Alps, can file a lawsuit to stop such projects."

At a joint press conference, Musk said, "If rules and regulations are added every year at the state, federal and EU level, then at some point people won't be able to do anything." That is why it is important for the Tesla boss that rules and laws are regularly checked in order to question their benefits and to consider abolishing them. "They can be reintroduced at any time if it turns out that it wasn't good," Musk continued. "If you add new rules every year, there will be no progress at some point."

Tesla is building a car factory near the capital's airport. Around 500,000 cars are to be built there every year. Production was supposed to start in July, but the end of the year is now in the room. Tesla is also planning a battery factory, which is delaying the approval process. So far, the company has been building with provisional approvals. The Tesla boss was confident that the approval process would be completed in October.

Elon Musk criticized the length of the approval process in April . This triggered a discussion about planning and environmental law in Germany. Laschet advocates dismantling bureaucracy, loosening economic fetters and creating new opportunities for economic growth.

The meeting with Musk had been planned for a long time and was also important to him personally, Laschet previously told the rbb. Not only Brandenburg and Berlin, but all of Germany would benefit from the establishment of the US group. Laschet said that Tesla had taken an enormous risk with the billion-dollar investment. "If the approval isn't granted, they'll have to dismantle everything here." He advocated that other companies could also build innovative industrial plants without taking such a huge risk.

Gigafactory Berlin is already set to start operations, with videos of the facility showing that its Model Y production line is raring to go. Despite still lacking a final approval, Tesla remains quite optimistic about Giga Berlin. The company estimates that Model Y production could begin at the Grünheide site by the end of the year.