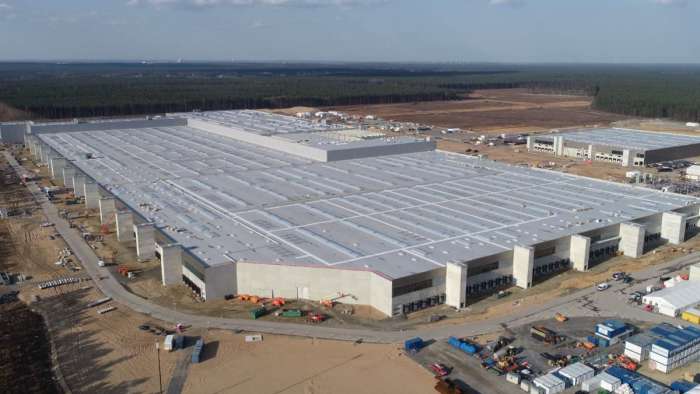 Two environmental groups, Nabu and Green League, say they will not take their fight against Giga Berlin to a higher court. However, the environmental organizations vow to keep their fight.
Advertisement

However, by the end, if Tesla fails to obtain a final permit, then the EV maker will be forced to halt construction and dismantle the factory at its own cost.

Of the temporary permits, the latest one was a decision by the Brandenburg State Environmental Agency to allow Tesla to begin testing production subsystems.

This has raised criticism by German environmental groups opposed to the Giga Berlin construction.

Two environmental groups, Brandenburg Nature and Biodiversity Conservation Union (Nabu) and Green League, specifically want the pre-approval of a functional test of the Tesla factory, issued by the State Environment Agency, to be halted until the final permit is issued.

Steinbach in an interview said, “I think it is questionable what justification a Bavarian environmental organization here in Brandenburg has to campaign against the Tesla settlement.”

Bavaria is home to some of Germany’s largest automakers such as BMW, Mercedes-Benz, and Audi. Steinbach didn’t make the direct correlation with the German automakers but left it with a question mark.

Related news: How Safe are Tesla Vehicles Compared to Other Auto Makers?

Nabu and Green League have criticized Brandenburg Environment Minister Axel Vogel for handing out temporary permits that allow Tesla to start testing systems functionality of the paint shop, body shop, and the installation of tanks for wastewater treatment and the refueling system.

However, at the time Axel Vogel, speaking at an environmental conference hosted by the Brandenburg Chambers of Commerce and Industry, dismissed the environmental organizations’ concerns.

Vogel said "We are convinced that it is right to give Tesla preferential treatment," because Tesla’s settlement in the area will have an "incredibly positive Europe-wide impact."

What are your expectations from Tesla AI Day? Here is what we should expect based on Elon Musk's recent announcements. Watch at https://t.co/AAhb5LxNnT
-
NEW
-#TeslaAIDay #AIDay #ElonMusk #Tesla #ElectricVehicles #FSD #DOJO pic.twitter.com/JyVBgutYjJ

Vogel believes Giga Berlin will play a significant role in accelerating the adoption of electric vehicles in Europe saying "We will now see that the switch to electromobility is much faster than we would have thought a few years ago."

Unsatisfied with Vogel’s response the environmental organizations filed an objection with the Brandenburg State Environmental Agency and proceeded to sue to stop Giga Berlin’s construction until the final permit is granted.

According to the German legal system the environmental organizations have the right to file their objection to the Federal Constitutional Court. However, according to managing directors of both organizations, they have decided to stop their legal battle against Tesla, at least for the moment.

In a statement to Business Insider, the environmental groups said the reason they have decided to halt their legal action is “the strong mismatch between costs and benefits”.

The environmental groups still believe they have a fair chance of winning before the Constitutional Court, however, they have found the costs to launch such legal actions prohibitively expensive.

Still, the environmental groups vow to continue their fight against Giga Berlin. NABU and Green League say they will file a new objection to the addition of a battery plant to Giga Berlin.

We will keep you posted if we receive more information regarding the environmental groups’ continued protest. Make sure to visit our site torquenews.com/Tesla regularly for the latest updates.

So what do you think? Do you believe the environmental groups’ objection to Giga Berlin is in good faith? Let me know your thoughts down in the comments below.

For more information check out: Tesla Notifies Model X Plaid Reservation Holders To ‘Prepare For Delivery’ Also, see Consumer Reports Expresses Doubts About Tesla Cybertruck While Some Businesses Are Counting On It