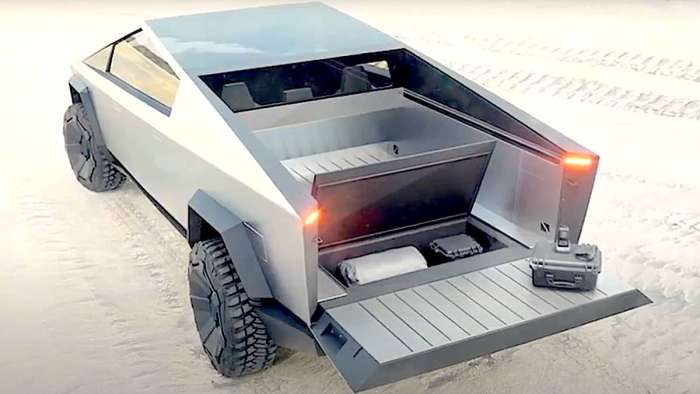 Will the Tesla Cybertruck really become a production-level EV or is it a prototype prank as recently questioned by Consumer Reports in spite of recent news that one business has already taken preorders totaling over $80 million for this single Tesla accessory.
Advertisement

Seeds of Doubt and Hope for the Cybertruck

In a recent update, Consumer Reports discusses the latest news on what is currently known about the Tesla Cybertruck and questions whether this will become a production-level reality to meet a growing fan base that has already preordered (with refundable deposits) over one million Cybertrucks. In other news, it was also recently reported that many of those same fans of all-things-Tesla in anticipation of the Cybertruck, are also preordering a significant number of $50,000 campers to accessorize the Cybertruck into an RV.

The excitement---and some disappointment---over the Cybertruck continues as Tesla enthusiasts continue to voice their anticipation with less than bated breath for a clear and believable delivery deadline as news has ranged from a predictions of why the Cybertruck will be delayed; if it is delayed why this is not problem; why it might flop per tweet from Musk; and, if it does flop, well…there is always an RC toy version of the Cybertruck to wax nostalgic over “what could have been,”…but didn’t.

According to Consumer Reports, here is what we know so far about the Cybertruck:

• Its novel brash, edgy design that currently looks like something from children’s building blocks and the DeLorean DMC-12, and is expected to look very much like the patent design reported earlier when the release does finally arrive.
• It “ROCKS” with sports car–like acceleration, heavy-duty-truck-grade tow capacity, an incredible 500-mile range.
• It will come in a range of power train flavors ranging from single-motor, rear-wheel drive; dual- and tri-motor with all-wheel drive at a price of $39,900, $49,900 and $69,900 respectively and an estimated range of 250+, 300+, and 500+ miles also respectively.
• The three power train systems will provide an incredible 0-60 mph in 6.5, 4.5 and 2.9 seconds, respectively as well, in the referred-to power train order above.
• Powered with next-generation 4680 batteries.
• The final production design will likely be a little smaller than the prototype observed, and more like the size of a Ford F-150 crew cab truck.
• Minimalist design interior with a large, dominant center screen and a yoke-style steering wheel.
• It has a 6.5-foot bed with a large, hidden storage compartment and an expected tailgate design that will tilt down and extend to become a ramp for loading a motorcycle, an all-terrain vehicle, etc.
• The Cybertruck is competition with the Chevrolet Silverado Electric, GMC Hummer EV, Ford F-150 Lightning, and the Rivian R1T.
• Most recent production forecast is late 2022.

During their review update of the Tesla Cybertruck, while admittedly admiring of the novel proposed EV and its expected performance, Consumer Reports remains uncommitted as to whether they believe that the Cybertruck will truly become a mass produced reality for its fans.

In fact, in the review they state that:

It’s hard to believe this is a production-intent vehicle, given its unconventional design. The shape and structure raise all kinds of questions that will eventually be answered, including outward visibility, pedestrian compatibility, and most important, whether it is just a prank.

Their doubts are not unjustified as automotive experts from Consumer Reports---who have credibility and experience with the automotive industry---site hurdles that need to be overcame in order to fill all of those orders.

Hurdles like: manufacturing enough 4680 cells to power all of the vehicles promised; that the power promised will really materialize in practice; a chip shortage that shows no sign of resolving anytime soon; and, whether the body, framework, and electrical design will truly meet safety standards under crash testing. Plus, there are concerns about some features of the Cybertruck as well as FSD and driver assist problems that will undoubtedly increase once it is available in the Cybertruck.

No Doubt in These Minds

While the Tesla user interface patent shows an early Cybertruck with camper design, not much has been forthcoming of whether this is more of an afterthought, a pipedream, or will become one of Musk’s last minute surprises at a future convention when the production release is definitely finalized and a production model showcased.

In any case, other businesses are counting on Cybertruck production. So much so that according to a recent BusinessInsider.com news report, the company Stream It---a Las Vegas-based analytics company that has designed the CyberLandr to make the Cybertruck into multi-use RV---are reporting preorder sales of their $50,000 camper accessory are now totaling over $80 million.

The report states that the “CyberLandr” is expected to be produced and delivered in tandem with the Cybertruck when it finally arrives. And in spite of recent news that production of Tesla's Cybertruck has been pushed back from 2021 to 2022, Lance King the CEO of Stream It assured Insider that the company is "ramping everything up," in anticipation of what they believe will be the eventual Cybertruck’s promised release.

"The only company I can think of that could do that is my company," King said. "We've got the software developers, we've got the AI, and we're really creative. We wanted it to be a Tesla-like experience even when you were in a RV," the Insider quoted King.

Features of the Cyberlandr include:

• A retractable staircase that leads up to the interior's living room, bedroom, and bathroom.
• Similar to pop-top camper, the entire unit can tuck away into the Cybertruck's bed when not in use.
• Comes with all the basics with some high-tech touches such as a voice-controlled smart faucet. Includes kitchen space with a refrigerator, a porcelain countertop with a hidden cooktop, and a sink with a cutting board and drying rack.
• A living room that transforms into a bedroom with removable seats, voice or phone activated lights and temperature control, and a 32-inch smart television equipped with streaming services.
• A bathroom with heated floors, an onboard bathroom with a shower, sink, and toilet, and smart glass that can dim for more privacy.
• Power that will come from Cybertruck battery system and the camper’s own 500-watt solar panels.
• Low energy loss---The 1,200-pound camper is expected to cut the truck's range by 5%.

One Problem With the CyberLandr

In fact, that “Tesla-like experience,” may be prophetic. While the company has no doubts that the Cybertruck will eventually arrive, they do have concerns due to the fact their camper is wholly dependent on the final Cybertruck specifications. Unless Tesla shares their specs before the Cybertrucks are released, this Tesla camper accessory business will have to modify the fit of existing campers, which may mean that the first few customers might not have their Cyberlandrs by the time their Cybertrucks are ready. In other words, another wait for Telsa customers.

For more about the CyberLandr, here is a YouTube video with additional details:

And so there we have it---experts who are unsure if the Cybertruck will become a reality; and, at least one company heavily invested in Tesla’s success. If you have views you would like to share about the Cybertruck and the CyberLandr, please let us know in the comments section below.

For more about current car news involving many makes and models, be sure to bookmark our site and stay updated on the latest information for car enthusiasts and those interested in car maintenance, repair and care.

COMING UP NEXT: The most fuel efficient hybrids of 2021.

DeanMcManis wrote on August 18, 2021 - 10:18am Permalink
The current CEO of Consumer Reports is Marta Tellado, She recently was a top executive at the Ford Foundation. And since she started running Consumer Reports, their reporting has become biased and inaccurate, regularly casting doubt on Tesla in particular. This latest FUD (fear, uncertainty, doubt) article is a good example of their unreliable writing, and pointed bias against Tesla.

Tsingshan's Threat to Tesla: EV Maker Is In Battery Crosshairs
Tesla-Funded Research Reveals One of The Biggest Mysteries of EV Battery
END_OF_DOCUMENT_TOKEN_TO_BE_REPLACED