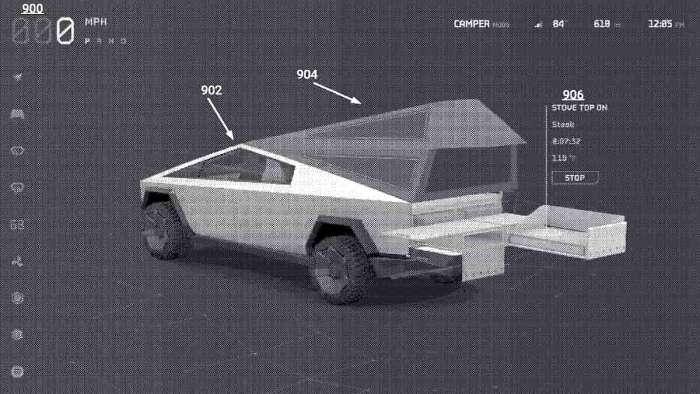 A recent tweet alerts Cybertruck aficionados that a “user interface features” patent described using images of an early Cybertruck design is available for reading. Here is a summary of some of the highlights of the interface design and features that shows among other things an early camper addition now known as Cyberlandr.
Advertisement

Cybertruck enthusiasts will be interested to read in detail many of the early design features to be expected in Tesla’s Cybertruck from a recently identified patent with an International Filing Date of 20 Nov. 2020. The credit of the patent goes to inventors Pawel Pietryka and Jean Helfenstein of Tesla Inc.

The whole point of the new patented interface is to provide the driver with an intuitive digital interface over a more analog type of one in order to be able to handle numerous complex features hidden in the background, so as to result in a pleasurable driving experience.

News of the Cybertruck has been a hot topic lately, particularly with the advent of the Ford F-150 Lightning in comparison reports, as well as in the toy industry when Mattel recently released an affordable 1:10 scale RC model of the Cybertruck that also included a potential Tesla accessory---the Cyberquad.

As we can expect, the Cybertruck will likely go through additional design changes up and until the last minute of its eventual release to the public. One of the most recent views thus far, has been a sighting of the Cybertruck in NYC in May, 2021. Lacking external side view mirrors and door handles, the newest design with its stainless steel body possesses a futuristic origami style to it that makes it look like something out of a Steven Spielberg movie. Personally, the wheels are my favorite.

However, to get a good feel for where the design began, a recently available patent application made the news lately that offers some interesting visual Cybertruck image revelations as physical examples supporting the description of expected interface features; features, that are to be expected in the final model when it becomes available to waiting fans of all-things-Tesla.

The following is a brief summary of some of what’s in the patent, but Tesla enthusiasts are encouraged to get their “geek-on” and delve into the details.

It’s All About Modes: The patent covers numerous modes displayed for both the driver and passenger that provides a wealth of information concerning driving, safety and comfort conditions. The modes described include such features as:

• Off-road environment and road conditions---presumably including how well the vehicle’s drivetrain is responding to the ride.

• Detection of road hazards such as potholes or debris projected on a screen.

• Visualization in multiple forms of surroundings and maps that zoom in and out autonomously as would make sense to a driver when encountering roadway features such as entering and departing on-ramps and off-ramps, providing useful contextual information including upcoming sideroads.

• Passenger eye-tracking for mirror adjustment or to adjust seat height to allow better viewing based on eye position.

• Multiple driving views in both lone vehicle and camper modes.

• Viewing modes and control for when towing a trailer.

• Information outside of the vehicle presented visually on screen such as when the tailgate is open or a charging port is engaged.

• Sensors and cameras within the vehicle that will identify passengers and drivers with facial recognition and tracking of who is where and when.

• Sensors and cameras outside the vehicle to autonomously detect and attach the hitches between the vehicle and a trailer.

As stated earlier, Tesla enthusiasts are encouraged to give the document a read for a full appreciation of what to expect in the Tesla Cybertruck. The aforementioned content only scratches the surface and the details hold some interesting surprises.

For more of the latest about Tesla, here's a new article about a problem with the Tesla Model Y.