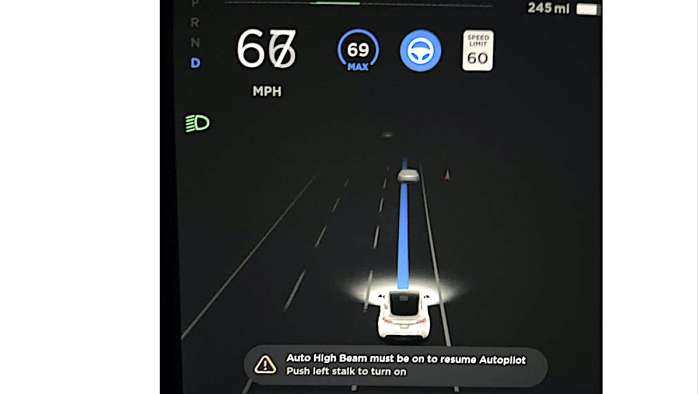 News recently has been focused on the announcement that Tesla will no longer be equipping their vehicles with radar and that the company's Autopilot suite will soon be replaced with its "Pure Vision" system consisting solely of cameras.

Reasons proposed for the change include possibly a shortage of availability of components to continue supporting a radar system, that it is a cost-cutting measure particularly with the lower-priced Tesla cars in mind, and/or that the camera-based system is so good that radar is not really needed.

Be that as it may; however, it appears that not all of the bugs involved in current vision functionality have been adequately addressed. In particular---the high beam issues some owners report while using Autopilot.

What's Going On With The Auto High Beam Function?

Just yesterday Reddit member Jaws12 posted that after picking up his brand new Model Y in Cleveland, he discovered that Autopilot essentially forces the owner to have the Auto High Beam function enabled while on Autopilot. 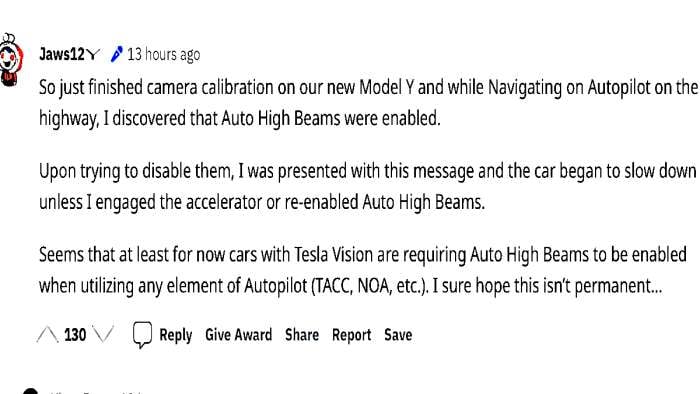 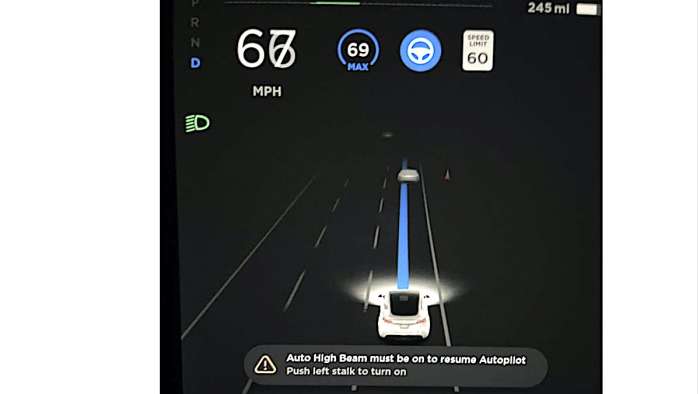 The automatic high beam function in Tesla and other makes of vehicles are designed to engage the high beams when oncoming traffic is no longer detected, and then turning them off once an oncoming vehicle (or approached vehicle) is detected by the vehicle’s vision sensors.

In other words, you are driving with high beams on all the time presumably because it offers a better view of the road ahead. This is in contrast to traditional driving habits when drivers were encouraged to drive primarily with their low beams all the time except in times of reduced visibility. The exception of course is to dim the headlights when blinding another vehicle is imminent.

The post seen in Reddit was surprising to me in two ways: (1) I thought that High Beam issues were an old problem fixed previously with updates. (2) This might not be a software/function issue, but is possibly designed this way because engineers decided a “Motherboard Knows Best” approach was needed. In other words, the view that Autopilot is a better judge of lighting conditions than the owner is.

Problems with the Auto High Beam function with Autopilot are not new. A quick search back in time reveals that while not everyone has experienced problems with the High Beam function on their Teslas, others have reported repeatedly flashing headlights, erratic High Beam on/off behavior, etc. It appeared that environmental conditions such as reflective road signs, vehicles with skewed headlight alignment and commercial vehicles with relatively higher sitting head and tail lights confused the sensor response.

Software updates appeared to be the solution and took care of the problem. Until now.

However, with the Reddit post that a brand new Model Y is experiencing an Auto High Beam requirement in order to use Autopilot, it seems odd enough to believe that perhaps it’s not a software or environmental glitch, but something else.

According to a following post by Reddit member Respectable_Answer, it may just be a matter of a band aid fix until the next upgrade in Tesla Vision happens. 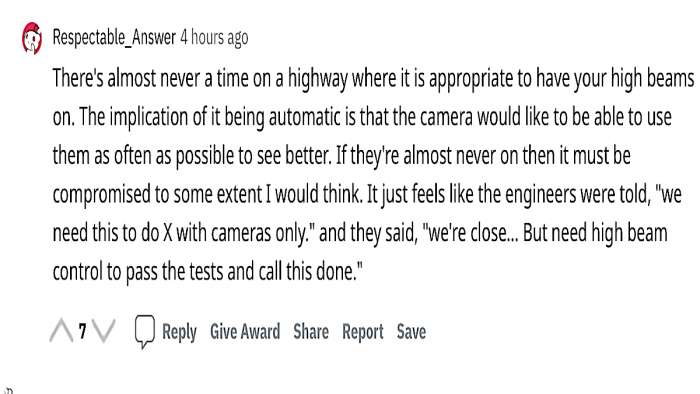 We Want to Hear Back From You

Please let us know in the comments section below if you have had any issues similar to the Reddit Post or if you have found that the Auto High Beam function has always worked fine for you. Plus, what are your views on a “Motherboard Knows Best” scenario? Should we accept loss of control of features because some may view who or what is the better driver?!

Travis wrote on June 4, 2021 - 4:37am Permalink
I just picked up my new MY two days ago and have the same issue. The lanes on my normal commute have a very large divider so the auto beams really struggle to pick up the oncoming cars in time and you have to have this feature on to be in autopilot. Really pretty frustrating.
Timothy Boyer wrote on June 4, 2021 - 9:45am Permalink
Yep, and no one likes to feel someone is high-beaming them on purpose, which could lead to unintentional road rage. I am still conflicted about the "always on" high beam decision by the automakers. Has this been proven to improve overall safety on the roads, or just led to one problem replacing another? And, there is also the possible light pollution factor. I can imagine cities like Tucson with an observatory not far away would be adversely affected if every vehicle drove with high beams on all the time. Thanks for your comments!
Scott wrote on November 6, 2021 - 8:44pm Permalink
This wasn't a problem until recently when I joined the beta users for FSD. Now it's just annoying to use autopilot. I usually never need high beam function, but now it's always enabled when on autopilot. And yes the function is so random. Allot of the time I feel my Tesla is sending Morse Code to oncoming traffic, and there's no way of turning it off. Just hope Tesla will change this feature so I can turn it off.
Darrell Fether wrote on April 25, 2022 - 6:11pm Permalink
Completed a round trip from Seattle to Phoenix with this auto-highbeam force enabled. It was terrible and continued to flicker brights on to the point other cars began responding with their brights as well. Signs also caused brights to flicker. It was so bad that I turned it off because I felt like a Dbag driving with assistance for all others on the road. Hopefully it gives an option to take it off because if not I will only use it during daytime driving because of the flaws with brights at night.