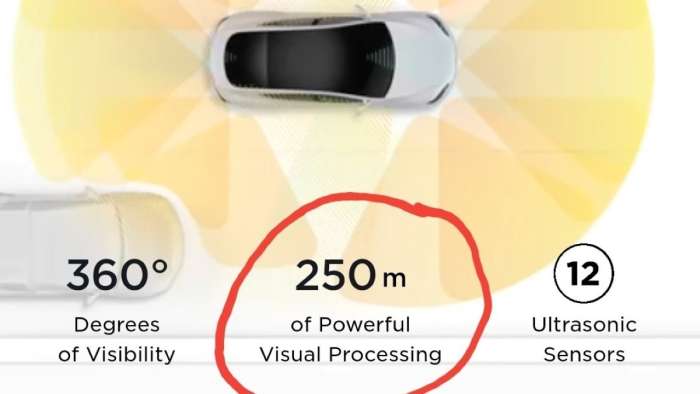 Tesla has removed radar from the company's Autopilot suite and replaced it with a "pure vision" system. This is expected to be the final major update before FSD wide release.
Advertisement

In an update to the company’s online configurator earlier this morning, Tesla has announced the company is moving from a radar-vision hybrid self-driving system to one that solely relies on cameras.

However, now Tesla has removed any mention of radar, and the autopilot section only mentions “Powerful visual processing at up to 250 meters of range”.

And once Tesla achieves this feat, Elon believes using other sensors such as LiDAR and radar will be redundant. That’s why Musk believes Tesla has better AI hardware and software than Google Waymo.

Musk’s argument against sensors at a different sliver of the electromagnetic spectrum such as LiDAR and radar is two-pronged.

First, Elon believes our current traffic and road system is designed for a pure vision system - meaning the roads were designed for drivers to navigate using their eyes. And for any AI system to be meaningfully better than a human driver it first needs to solve pure vision driving.

And second, for some who ask why not just have radar and LiDAR as support, Musk’s response is one, cost; and two, complexity.

Adding redundant sensors will add thousands of dollars to the cost of the vehicle ergo it will make Teslas less accessible.`

And two, these sensors generate a stream of data which will then have to be processed adding to the complexity of the AI system. This will then require more processing power, more energy making the vehicles less efficient and more expensive.

Elon asked how many lines of code it takes to enable Teslas to drive autonomously, he answered at Tesla they look at having hundreds of thousands of lines of code as a bad thing.

According to Tesla, the move to a pure vision system is the final hurdle before the company can release full self-driving to the wider public.

FSD Beta has now been expanded to ~2000 owners & we’ve also revoked beta where drivers did not pay sufficient attention to the road. No accidents to date.

Next significant release will be in April. Going with pure vision — not even using radar. This is the way to real-world AI.

Currently, Tesla is testing the feature-rich FSD beta with 2000 or so early access program (EAP) participants. That is after Elon announced Tesla FSD Beta testers double and ones not paying attention got removed.

In the current iteration of the (EAP) FSD beta release, the vehicles can autonomously navigate almost all scenarios of driving with good accuracy.

And with the release of pure vision FSD, which is probably imminent to the EAP participants now that Tesla has updated the online configurator, this might as well bring Tesla vehicles on par with human drivers in all aspects of driving.

Today in Tesla’s history might just be the day Tesla begins the company’s long-awaited transition from a vehicle manufacturer to a fully self-driving AI robotaxi company.

Cathie Wood and ARK Invest believe this move will greatly increase Tesla’s profitability making it possibly the most valuable company in the world.

So what do you think? Are you excited about Tesla’s move to a pure vision FSD system? How long do you think this software will take to roll out to the general public? Let me know your thoughts down in the comments below.

The following is an update on this topic from Torque News Youtube channel as some Tesla owners convey their worries over Radar loss for inclement weather.