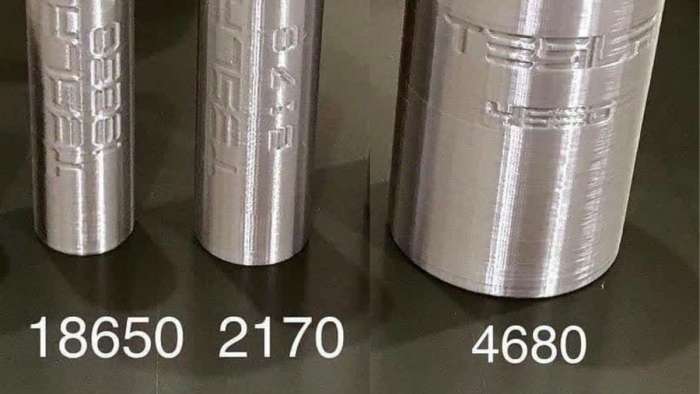 Twitter account Whole Mars Catalog recently posted an image of metal facsimiles of the 18650, 2170 and the new 4680 battery cells for powering Tesla’s latest models. The image is inspiration for a basic information comparison between the cell types and what it means for each cell and your Tesla.
Advertisement

Greater capacity, more power, smaller size, lighter in weight, easier to manufacture on a mega scale and with less expensive components are the challenges of designing an EV battery. In other words, it comes down to cost and performance. Think of it as a balancing act where the kilowatt hours (kWh) achieved need to provide the most range, but at a reasonable manufacturing cost. Hence, you often seen a battery pack description listing its manufacture cost coming with numbers such as a range of $240-$280/kWh for example during production.

Oh, and let’s not forget safety. Remember the Samsung Galaxy Note 7 fiasco a few years ago and the EV battery equivalents of vehicle fires and Chernobyl equivalent meltdowns. Spacing between cells in a pack and thermal controls to prevent one cell from igniting another cell, from igniting another cell, etc. in a runaway chain reaction disaster scenario adds to the complexity of battery development for EVs. Of which, even Tesla has had its share of problems.

While EV battery packs consist of three major parts: the battery cells, the battery management system(s), and a box or container of some sort to hold it all together, for now, we will take a look at just the cells and how they evolved with Tesla, but remains an issue for Toyota.

The cylindrical 18650 cell is a lithium-ion type measuring 18mm in diameter and 65mm in length and weighs approximately 47 grams. At a nominal voltage of 3.7volts, each cell can be charged as high as 4.2 volts and discharged as low as 2.5 volts, with each cell storing up to 3500 mAh. 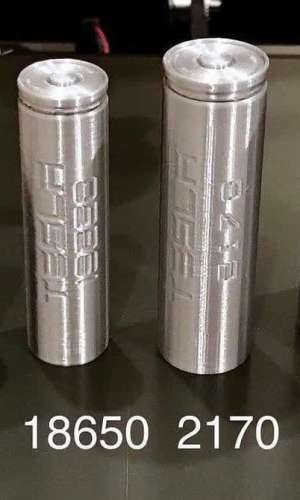 Much like an electrolytic capacitor, Tesla’s EV battery cells consist of long sheets of anodes and cathodes separated by a charge-insulating material and are rolled up and packaged tightly into a cylindrical form to save space and pack as much energy as possible. Those sheets of cathode (negative charge) and anode (positive charge) each have tabs for connecting like charges between cells resulting in a powerful battery---the sum of many as one, if you will.

Like a capacitor where its capacitance (power) is increased by decreasing the spacing between the anode and cathode sheets, changing the dielectric (the aforementioned insulating material between the sheets) to one of higher permittivity, and increasing the area of both the anode and cathode sheets, the next step up in Tesla’s EV cell was the 2170 which came in a cylinder slightly larger than the 18650 measuring at 21 millimeters by 70 millimeters, and weighed approximately 68 grams. At a nominal voltage of 3.7volts, each cell can be charged as high as 4.2 volts and discharged as low as 2.5 volts, with each cell storing up to 4800 mAh.

There’s a tradeoff, however, primarily of which is more about resistance and heat than it was about the need for a slightly larger can. In the case of the 2170, the increase in the anode/cathode plate sizes resulted in a longer path for charge to travel which meant more resistance and thereby more energy escaping as heat from the cells as well as interfering with rapid charging requirements.

To create a next generation battery cell with even greater power (but without increased resistance) Tesla engineers designed a significantly larger cell with what is called a “tabless” design that shortened the electrical path and thereby resulted in less heat generated from resistance. Much of this can be attributed to who is possibly the best battery researcher in the world.

The 4680 cell is shingle-spiral form design that is simpler to manufacture and comes in a package size of 46 mm in diameter and 80 mm in length. The weight is not available but its other voltage characteristics are reportedly similar or the same; however, each cell is rated for around a whopping 9000 mAh, which is why the new Tesla tabless battery Is so good. Furthermore, its charging speed remained conducive to rapid requirements.

So, What Does This All Mean?

While going up in size rather than down in size with each cell seems counter to design desires in a battery cell, the improvements made in the power capacity and control of heat generation of the 4680 over both the 18650 and the 2170 resulted in basically fewer cells with more power per pack in the same size pack as used with earlier Tesla models powered with the 18650 and 2170 cells.

To put this in a numerical perspective, that means only about 960 “4680” cells are needed to fill the same space as the 4,416 “2170” cells in the same amount of space, but with added benefits such as a lower cost per kWh production and a significant increase in power using the 4680 cell pack.

As reported earlier about a comparison to the 2170 cell, the 4680 is expected to provide five times more energy storage with 6 times more power resulting in an increase from 82 kWh to 95 kWh in the newer Tesla’s, translating into an expected increase in road range of up to 16 percent.

Bear in mind that this is just the basics on Tesla battery cells and that there is much more behind the tech. But it’s a good start for future articles, as we will take a look on how the battery packs are managed regarding power use, as well as safety issues with respect to controlling heat generation, lost power, and…of course…the risk of EV battery fires.

If you are into All-Things-Tesla, here's your chance to buy a Hot Wheels RC version of the Tesla Cybertruck.