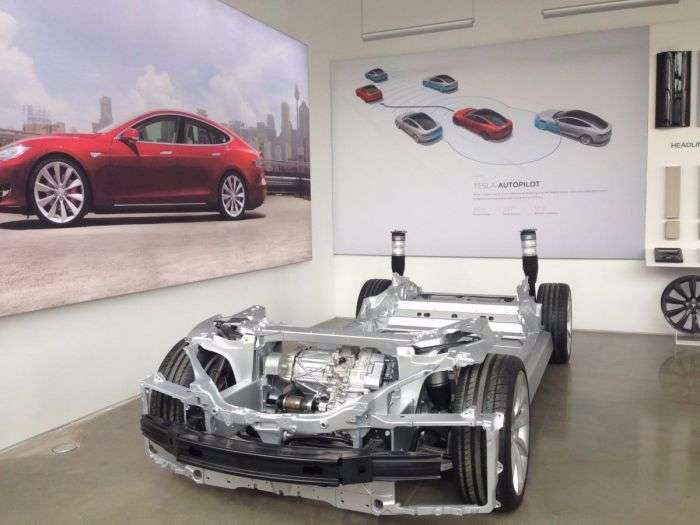 Google Chevy Bolt battery fire and you will not find a single story that says Chevy Bolt had an accident and battery caught fire. Yet, there are number of Tesla cases where the battery caught fire after an accident. Why Tesla batteries catch fire while Chevy Volt and Bolt batteries don't. Or at least, in the case of Bolt and Volt the battery fires are extremely rare or unusual.
Advertisement

Today I saw a discussion in GM Electric Vehicle Owners group on Facebook, in which user Joe Reall answers the question related battery fires of Tesla vs Chevy Bolt and Volt.

"The Chevy Volt and Chevy Bolt's batteries are far safer than the Tesla batteries that bursted into flame in the latest incident. Tesla's Panasonic cells are made with thin metal casings so that the heat from one burning cell causes the neighboring cells to burst especially when exposed to air in an accident. The Chevy Volt and Bolt's battery cell casings are much thicker and help prevent breaking apart due to impacts or heat and are also covered with fire retardant. Yes, the batteries of Volt and Bolt are more expensive than Tesla's, Toyota's, Nissan's and Ford's, and has heavier battery weight per unit capacity but it has saved lives and properties. So far, there have been no battery fires from Volt and Bolt in any of the accidents that they're involved. With Tesla on the other hand, the more battery capacity it has, the more intense are the fires and more difficult to put out, although it is still rarer than fires from gasoline cars."

As you remember about 10 days ago Tesla Model X caught fire after it hit a barrier on a California highway. Here is the post accident video so you can see the magnitude of the damage. Later Tesla revealed that the Autopilot was engaged and it actually blamed the driver (who passed away from injuries) for apparently ignoring the warnings.

"This is why we need a true solid-state battery with no volatile chemistry involved, like the eestor.us device that is now being marketed. They still have work to do to get the energy density per liter to where we need it for vehicles, but they are approaching it pretty fast from what I can tell. Plus, there is virtually no degradation after many, many cycles and it's low cost due to the materials they are using," replied Scott Collins, a user in the group.

In a story, by Life Science, discussing why the fire that incinerated a Tesla was such a nightmare to put out, the author writes, "what's more, lithium-ion fires can release high levels of "toxic gases" such as carbon monoxide, soot, hydrogen fluoride, and particulates of oxides of nickel; aluminum; lithium; copper; and cobalt, according to a Tesla Model X emergency response guide. As a result, firefighters need to wear a self-contained breathing apparatus and should use hoses that spray fog and special ventilation fans that push air out at a high velocity to protect bystanders downwind of the fire, according to the guide."

Do you think Chevy Volt and Bolt batteries are safer than Tesla batteries? What about Nissan Leaf's batteries? Please, share your thoughts in the comments section below for discussion.

kent beuchert wrote on April 3, 2018 - 8:51pm Permalink
The Tesla autopilot did not warn of an impending crash because it didn';t have a clue. It was simply reminding the driver that the autopilot is really not an autopilot at all
James Rowland wrote on April 4, 2018 - 2:42pm Permalink
Tesla's Autopilot most certainly IS analogous to an aircraft autopilot. Unfortunately, most people do not know what one of those is either. Aircraft autopilots maintain attitude in one or more axis (pitch, roll, yaw.) Some can also maintain a set heading, altitude and speed. The most advanced ones can even perform takeoff and landing (when properly lined up by the pilot.) What they do NOT do is decide where to fly (or any of the other duties of a pilot); this is why aircraft still need crew. Tesla's Autopilot is essentially the car equivalent of this: adaptive cruise control, lane keeping and (manually initiated) lane changing. It is what's classed as a "level 2" driver assistance system and does NOT take on the driver's responsibilities. You tell it what speed to drive at, what following distance to maintain and what lane to keep and it does its best to comply. The driver still has a duty to monitor it and the surroundings; Tesla make this abundantly clear when describing use of the system. It's also very clearly identified as a "beta" release - i.e. still in development. You must acknowledge this in order to use it. Tesla's Full Self Driving software is distinct from Autopilot, and is not even released to the public yet. I have to wonder why so much attention is on Tesla, and so little on the poorly marked road (where the divider looked like another lane) and unsafe barrier (that had already absorbed a similar crash by a human driver.)
James Rowland wrote on April 4, 2018 - 3:05pm Permalink
As for the battery fire, there is video online of the wreck still burning after the driver had been extracted. It was no inferno. The interior was not consumed - padding still on the seats, etc. Much of the pack had NOT burned; its partitioning into small, steel-clad cells seemed to be limiting and slowing the spread. Whatever the relative merits of fire protection on different pack designs, fire did not kill this driver. That would've been the internal injuries from running into an exposed concrete divider at highway speed.
Gerry Flood wrote on April 6, 2018 - 5:53pm Permalink
You didn't show how many vehicles of each kind are on the road vs the number of fires. That's the only number that's relevant. The first two Volts tested by NHTSA caught fire two weeks AFTER a collision, sitting in a parking lot. You neglected to mention Your article is 'inflammatory and keeps the negative news in the headlines' I prefer facts to opinions and anecdotes.
VFanRJ wrote on April 24, 2018 - 4:26pm Permalink
A Volt battery caught on fire 3 weeks after the test crash as a result of contact with coolant. Grant, chances are that the driver and left the scene by three weeks time. :-)
Daniel wrote on April 8, 2018 - 2:42pm Permalink
You cite a Facebook post as a source? Then proceed to use that Facebook post to prove what? Really? Is this the scientific method at work? Might be convincing if you did a side-by-side fire ignition and extinguishing test of GM Korean batteries vs Tesla Panasonic batteries. Or, do a bit of research and cite a national safety study. You have, as this web pages states, a "professional team of reporters..."
Howard wrote on June 28, 2018 - 9:33pm Permalink
GM Volt batteries are built at our battery plant in Brownstown Township, Michigan.
Liz wrote on March 28, 2019 - 3:31pm Permalink
Bought a 2019 Bolt in October, had a battery fire March 26. The first thing Chevy said to me was I had it plugged in wrong, wire wasn’t hot or melted or the charging area. Pretty scary may not go electric after that. Definitely a malfunction but I guess corporations look for any excuse. Just to be clear, the car was sitting in my driveway, no collision involved
H wrote on August 1, 2020 - 12:51am Permalink
On July 4th, my 18 month old 2019 Bolt started smoking while parked outside. Fully charged and driven for only a few miles that day. I filed a complaint with the NHTSA. NHTSA ID Number: 11339878 You can see pictures and video on my Twitter @hajimita I share your sentiments.
Jim Manners wrote on August 20, 2021 - 6:00pm Permalink
Well... 2021 has not been kind to this article. Things are playing out as they should, though. Imagine EVs being rapidly mass adopted amidst working out these early kinks. It'd be enough to sink any company.
Erik wrote on August 23, 2021 - 10:55am Permalink
Somehow...I get the distinct feeling that you feel really stupid about writing this article now
Texconsin wrote on September 3, 2021 - 3:39pm Permalink
"Great" article...wish I'd never have traded my nearly new Volt on a new Bolt. $24,000 less $14,000 trade on a not-so-towering inferno wasn't a good move at all.