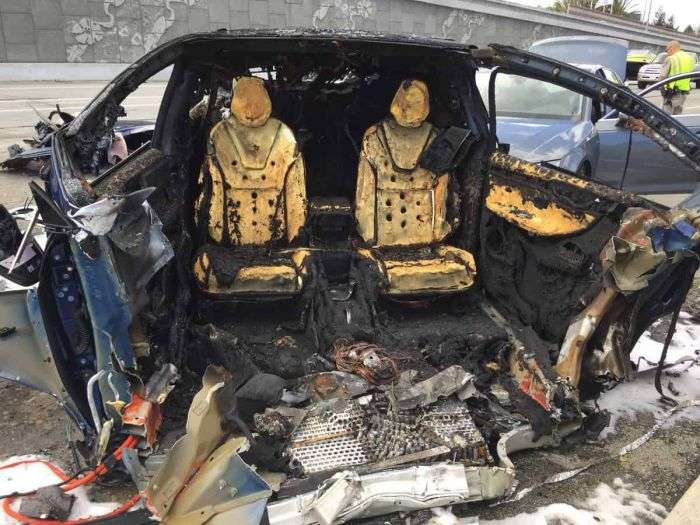 New video emerged from the scene of Friday's fiery Tesla Model X crash. The witnesses first helped to remove the driver from his Model X then shot this video, shared by NBC.
Advertisement

NBC's Ian Cull shared this new video of Friday's Highway 101 Tesla Crash, which happened in Mountain View, CA. It's fiery. You can see the the flare-ups starting the 14th second.

The witness, who sent NBC this video, says he shot the video right after he and his friend helped pulled the driver from the burning car. The driver later died at the hospital from his injuries.

NEW VIDEO: The moments after a #Tesla crashed today on 101 in Mountain View. Flare-ups seen at :14. Witness says he shot this right after he and two other men pulled the driver from the burning car. The victim later died at the hospital. Story at 11 on @nbcbayarea pic.twitter.com/rtJLHVPluz

The accident was reported around 9:30 a.m. when the blue 2017 Tesla, traveling at freeway speed, collided with a median barrier at the gore point separating the southbound Highway 101 carpool lane from the Highway 85 carpool flyover, the CHP said.

Soon after the crash, the vehicle caught on fire, and then an approaching Mazda and Audi hit the Tesla.

Torque News thoughts and prayers for the driver, his/her family and for all those losing their lives in car accidents.

Some people say Tesla should put the battery under the back seat, the way it is in a Toyota Prius. However, others write, saying the center of gravity would be impacted a lot if the batteries are put under the back seat. Prius still has a regular engine up front. Tesla doesn't.

There is no statistics about the frequencies of EV vs ICE fires during a crash, but no doubt electric cars burn differently. On the other hand, the media is now asking why the Tesla Model S is making headlines about fires after crashes when much higher selling EVs are not. We have asked this question in 2013 too: why Teslas catch fires after crashes while other EVs like Nissan Leaf and Chevy Volts and Bolts don't. According to John Goreham of Torque News, the real reason Tesla needs to worry about Model S fires has nothing to do with the car.

Following the crash, Tesla sent engineers to assist the firefighters in removing the vehicle and its battery pack from the scene. The picture with this story is from Dan Smith via Twitter.

Tesla needs to have a very convincing explaination on why its cars catch fire after a crash. Perhaps it doesn't happen often, but we see this headlines frequently. As a result, people may opt to buy other EVs or ICE, or hybrid car, which they deem are safer in a crash.

Update: NTSB has started an investigation.