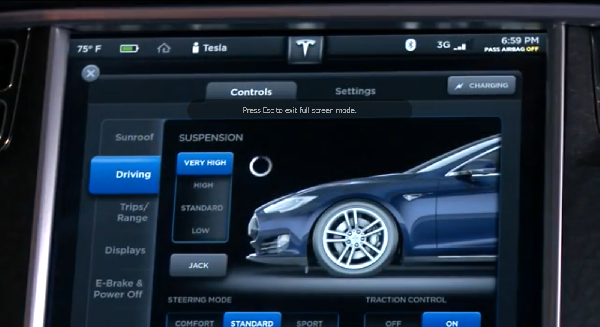 Elon Musk sends out a message to the Telserati. Will change all Model S suspension settings immediately and include fires under warranty. Musk asks for NHTSA’s help with investigation.
Advertisement

Tesla Model S Fires Update - Just after publication of this story yesterday the National Highway Safety Traffic Administration opened a formal investigation into the two Tesla fires reportedly caused by "road strikes." Given the timing of Mr. Musk's announcement our comments below inferring that the Tesla request for an investigation were damage control now appear to be confirmed.

Prior Article Text:
Just a week after Elon Musk stated that there would be no recall over the three Tesla Model S fires in a five week span, he has changed his mind. Now, the plan is to modify all of the Tesla Model S cars’ suspensions so that they will no longer lower the car at highway speeds. That is unfortunate, since it was one of the many cool features of the Model S electric super-sedan. Although not a formal recall because the cars can be changed using the telematics system, the cars are to be modified to prevent fires nonetheless. Also, Tesla plans additional changes to the ride height feature at a future date.

The message came in an e-mail to the Teslerati registered with the Tesla website. In it Musk writes;
“First, we have rolled out an over-the-air update to the air suspension that will result in greater ground clearance at highway speeds. To be clear, this is about reducing the chances of underbody impact damage, not improving safety. The theoretical probability of a fire injury is already vanishingly small and the actual number to date is zero. Another software update expected in January will give the driver direct control of the air suspension ride height transitions.” This is the same action that might have been taken in a more formal recall. That the Tesla can do this while the Model S is parked in one’s garage is very cool.

The next part of the message was very unexpected, but is really a good PR move by Tesla. Musk asks the National Highway Traffic Safety Administration (NHTSA) to investigate the fires. We say this is a good move not because it will actually make any difference in NHTSA’s decision. NHTSA can do whatever it wants and does not need Tesla’s permission. We say it is smart because according to reports NHTSA was already looking into it. By calling for an investigation Musk will fool those who have not closely followed this into thinking the investigation was his idea. The investigation section reads; “Second, we have requested that the National Highway Traffic Safety Administration conduct a full investigation as soon as possible into the fire incidents. While we think it is highly unlikely, if something is discovered that would result in a material improvement in occupant fire safety, we will immediately apply that change to new cars and offer it as a free retrofit to all existing cars.”

The last part of the message addresses the fire damage costs to the customer. Really, this is a message to investors and to insurance companies. If you hit something with your car and a fire results, your insurance company already covers the repairs or replacement of the vehicle. However, insurance companies can set their rates however they like within reason. That is why a Corvette costs more to insure than a Volvo sport ute costing the same. This section is to appease the insurance companies who might be thinking, “If three of these things have burned up and there are only 19,000 of them in the world, we might want to bump up those premiums a bit.” The message reads; “Third, to reinforce how strongly we feel about the low risk of fire in our cars, we will be amending our warranty policy to cover damage due to a fire, even if due to driver error. Unless a Model S owner actively tries to destroy the car, they are covered.”

Musk spends a fair bit of time in the introduction castigating the media that helped it get its message out when it was the darling of the liberal press. The lamestream media has since turned against Tesla due to the “wicked awesome” fire photos and video now available to all who like to watch things burn (you know who you are, and now so does your internet provider). However, to point out that not all the news was wrong, Tesla picks one organization out to prove there is some “balanced” coverage out there. Followers of Tesla here at Torque News know we love to poke fun at the all-male management team there and their sometimes kooky ideas. That said, our coverage has always pointed out that the fires were not a car problem. Rather they are a public relations problem. You can be the judge as to whether this recent Tesla announcement has helped in that regard. Note -if you view the video, the adjustable suspension is explained at minute 1:30. This is what Model S drivers had before the new change.

Image of Tesla Model S NOT engulfed in flames, and video, courtesy of Youtube and Tesla Schweiz.