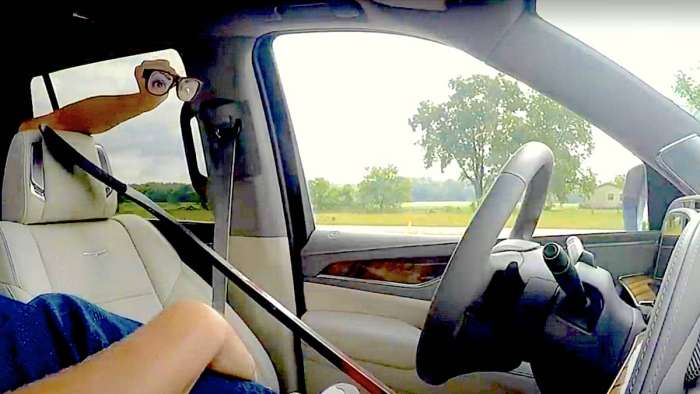 Driver Assist Safety Can Be Fooled Not Just in Tesla, But in Ford Vehicles and Many Others Too

A new video shows that just like Tesla, Ford and many other vehicles equipped with driver assist features can be tricked into unsafe driving conditions. According to Car and Driver magazine, “..this is not just a Tesla problem, but one that affects the entire industry. Automakers should close these loopholes to head-off future idiocy.”
Advertisement

A Little Background on Driver Assist

We’ve heard many stories about how that Tesla has faced several incidences in the past in which their Autopilot/FSD safety features are bypassed with a variety of driver-generated antics to see if Tesla’s self-driving safety features can be fooled. One especial story was about at least one Tesla owner caught on camera avoiding Tesla’s safety features and recommendations by foolishly riding in the back seat while in traffic.

It’s a fact that Tesla has taken an inordinate amount of grief from both fans and non-fans of all-things-Tesla that includes a blind corner Tesla Vision shortcoming; a contentious problem over confusion when another vehicle is straddling a traffic lane; and, an auto-high beam issue that has some arguing whether a vehicle should be on high beams constantly with the exception of an approaching vehicle.

In spite of this---or, maybe because of this---Tesla has persevered with remarkable demonstrations of nearly-true FSD traffic capabilities; but not quite there yet, as pointed out by Consumer Reports car analysts.

More recently, however, Car and Driver automotive experts have found that it’s not just Tesla, but Ford and many other models as well when drivers attempt to bypass FSD-similar assisted driving features to see what would happen in cases of driver deception testing.

Ford has made significant headway toward providing their vehicles with driver assist safety features and is also competing with Tesla toward an eventual true FSD system. Earlier, we learned that Ford had outfitted a Ranger with an FSD platform to test self-driving tests off-road.

The Car and Driver Analysis

Recently, Car and Driver magazine released a video demonstrating that tricking a vehicle’s driver-assist related safety features is not just a problem for Tesla, but for many makes and models entering the self-driving arena. In fact, all 17 models tested could be fooled into allowing the “driver” to not be behind the wheel while the vehicle was on the road.

The conclusion reached by the Car and Driver is that with the development of driver assist and other FSD-related features in future cars, that…”this is not just a Tesla problem, but one that affects the entire industry. Automakers should close these loopholes to head-off future idiocy.”

It's Not Just Tesla: All Other Driver-Assist Systems Work without Drivers, Too

For more about current car news involving Ford, Toyota, Tesla and many other makes and models, be sure to bookmark our site and stay updated on the latest information for car enthusiasts and those interested in car maintenance, repair and care.

COMING UP NEXT: Finding a Trustworthy Mechanic