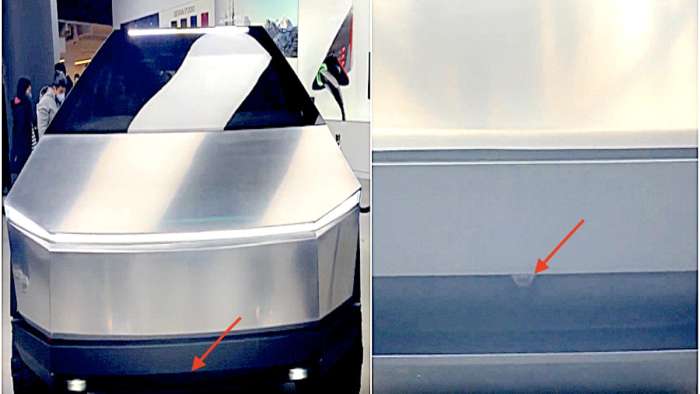 A post on Reddit titled “Cybertruck has a camera below the front bumper” made by Reddit user u/NoT-RexFatalities reveals that not all viewers are impressed by Tesla’s new front end camera feature for the Cybertruck.
Advertisement

When are too many features, too many features? A recent post on Reddit with an image of what appears to be a front end camera on a Tesla Cybertruck displayed at NYC this past weekend literally begs this question when the Reddit public pointed out that not only is Tesla not the first automaker to install a front end camera on their vehicles; but, that such a camera comes with problems.

Then too, there is also the question of what is the real function of a front end camera? Adding to a 360 degree viewing range? For parking purposes only? To see what you just ran over without having to get out of the vehicle?

Looks Like Tesla Semi Has Reduced Cameras From 26 to 10, Setup Reveals

Don’t get me wrong, I like new tech and features—but not when they become just another issue that can interfere with a good driving experience. And especially when it can lead to an unintended mishap that the engineers who designed the system did not foresee: Least of all, privacy issues. Would a recorded front end view of an accident open the driver up to subpoenaing or even impounding his or her Tesla as evidence?

That said, if you have ever experienced a mishap with a front end camera on your vehicle—or would like to weigh-in with your opinion on when features become too many features, be sure to respond to this article and let us know what you think.

Please, also check my latest story in which I show Tesla's new 4680 battery pack with the current 2170 pack side by side.

Josh wrote on May 10, 2021 - 4:35pm Permalink
I’ve got this on my Tacoma and it’s great for off-roading. Navigating boulders and setting up for the correct line. Great for cresting hills and being able to see what’s below you if anything.
Timothy Boyer wrote on May 10, 2021 - 5:51pm Permalink
Yeah, I can see that being a real asset for off-road enthusiasts. Should be excellent for lining up with ramps loading onto a trailer as well. Thanks for the input!