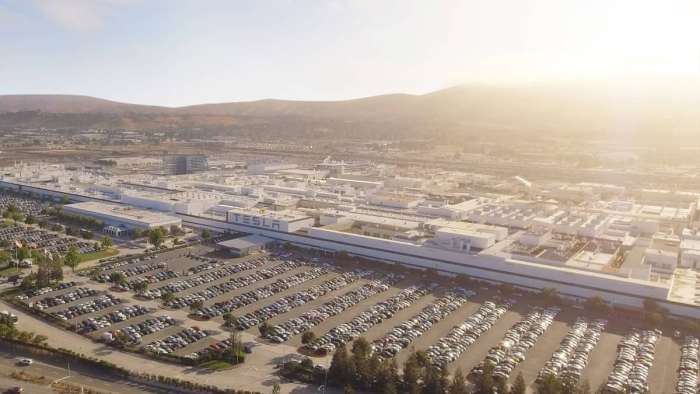 Tesla was forced to shut down the Model 3 production line at the company's Fremont California plant over the weekends. However, according to reports, Tesla has restarted Model 3 production, even though it is in limited quantity.
Advertisement

The entire automotive market is reeling from an almost year-long parts shortage caused by the Covid-19 pandemic. All major automotive manufactures, including Tesla, have been affected by the supply disruption in some form or another.

The main components primarily in limited supply are automotive-grade semiconductors. the chip shortage has forced countless automakers to idle their plants for an extended period of time.

Ford, the second-largest automaker in the US recently reported the company’s profit has fallen by 50% due to decreased production caused by the chip shortage.

This has allowed Tesla to grow vehicle production at the same time the broader automotive market had to significantly scale back production.

The chip shortage ordeal has also been a very good example of how Tesla is an auto OEM as much as a Silicon Valley software startup.

And this Saturday Tesla was forced to also shut down the Model 3 production line at its Fremont California plant. The main reason for the shutdown was stated to be chip shortage.

However, according to inside sources, on top of the semiconductor shortage, Tesla is also facing a shortage of other car parts. These include wheels, white interiors & headliners.

However, according to the sources, the Model 3 production line shutdown wasn’t long-lived. Tesla has reportedly restarted the Model 3 line on Monday after just 2 days of shutdown.

UPDATE: The Fremont Model 3 line was shut down on both Saturday and Sunday. As of Monday August 16th, the lines are back up and running. https://t.co/LSwknXnj3Y

However, even though Model 3 production is currently taking place at the Fremont California plant, Tesla has restarted the production line in a limited capacity as the EV maker prioritizes its more profitable vehicles.

According to reports the Model Y and Model S production lines in Fremont California are working in full force as of writing.

Was told Fremont production is still slow for the 3 as Tesla prioritizes the Y & S due to parts shortages. Makes sense as Model Y has better margins and a higher cost and S is Tesla’s current halo vehicle with Luxury level margins. Demand is especially high for the Model Y.

We currently don’t know how long the scaled-back Model 3 production will remain. We also don’t know how Tesla was able to sort out the issue so quickly.

We will keep you posted if we receive more information regarding the shutdown or Tesla’s overall production capacity amidst all the parts shortage. Make sure to visit our site torquenews.com/Tesla regularly to get the latest updates.

So what do you think? Can Tesla reach its internal goal of producing a million vehicles this year? Let me know your thoughts down in the comments below.