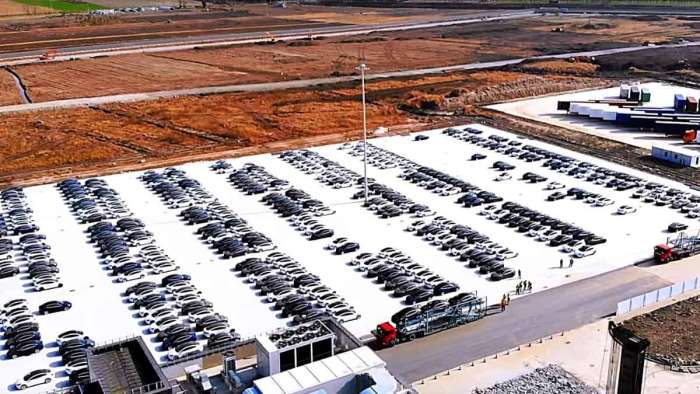 According to reports coming out of China, Tesla's Model Y Production at Giga Shanghai has reached over 1000 vehicles a day. Added all together, this gives Tesla a run rate of over 1.3 million vehicles a year.
Advertisement

Tesla is in the process of massively expanding its production capacity. According to the company’s Battery Day event, Tesla plans to produce 20 million vehicles a year by 2030.

And now a new report coming out of China suggests Tesla has achieved a major milestone to meet the company’s lofty 2030 vehicle production goal.

According to @bentv_sh who closely follows Tesla China’s production, and flies a drone over Giga Shanghai several times a week, Tesla Giga Shanghai production has reached over 1000 vehicles a day.

This gives the company an annualized Model Y production run rate of over 350,000 vehicles a year just in Giga Shanghai.

What is even more impressive about Tesla’s achievement is that the EV maker was able to reach this number only a year and a half after beginning Model Y production at Giga Shanghai.

And if Tesla has also reached the same production run rate at its Fremont California plant, this means the EV maker already has installed capacity to produce 700,000 Model Ys per year.

Tesla also seems to be preparing to add a new plant at Giga Shanghai which will grow the company’s production capacity even more. The new plant will be situated directly next to the current plant, and the land Tesla is clearing is so big it could be a new Gigafactory on its own.

Tesla hasn’t announced the vehicle that will be built at the new plant, however, there are rumors in the Tesla community suggesting it will be Tesla’s upcoming $25,000 vehicle.

Although Tesla China president Zhu Xiaotong has denied the new vehicle currently under development at Giga Shanghai is the upcoming compact $25,000 car.

Based on rumors out of China, before the end of 2021, Tesla will begin limited production of a brand new compact vehicle designed in China. From previous leaks, we believe the vehicle will be based on the Model 3 chassis.

This is not taking into account Giga Berlin and Giga Texas which are expected to begin production before the end of the year.

When taking into account all this together, Tesla will likely easily reach a production run rate of over 2 million vehicles a year before the end of 2022.

In addition to all these new factories, Tesla is also in the process of choosing sites in India and Indonesia to build new factories.

Cathie Wood and her Exchange Traded Fund ARK Invest, believe Tesla will be able to produce 5 to 10 million vehicles a year by 2025.

This is certainly great news for Tesla and we will keep you posted if the EV maker gives us more information regarding Giga Shanghai Model Y production. Make sure to visit our site torquenews.com/Tesla regularly for the latest updates.

So what do you think? How many Model Ys per can Tesla produce when Giga Berlin and Giga Texas fully ramp? And do you think Tesla will have a problem selling that many Model Ys? Let me know your thoughts down in the comments below.

For more information check out: Tesla AI Day Coverage Also, see Tesla Eyes at Increased Production in the 2nd Half of 2021