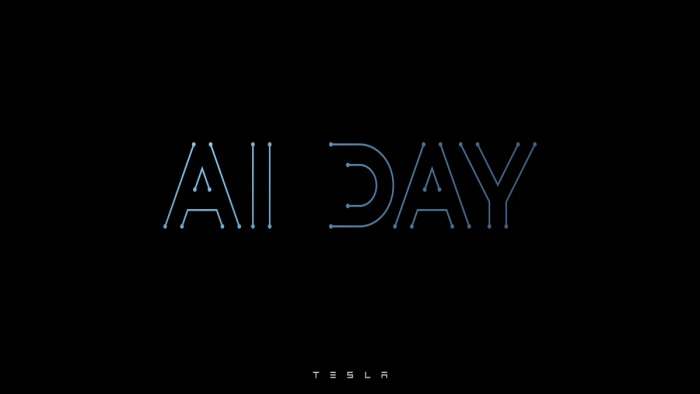 This is full coverage of Tesla's AI Day and everything that was seen or talked about that was of note.
Advertisement

Tesla AI Day is currently 45 minutes late. At the moment, we have a full self-driving video happening showing off Tesla's autonomous driving, while listening to techno and dance music.

Elon is on the stage now talking about AI Day and a brief overview of their full self-driving. He has passed the mic and time over to Andrej Karpathy, Tesla's lead in AI Development.

Andrej mentioned that they first tried doing object detection with single images from the 8 cameras on the Tesla vehicle, but that wasn't working because objects could span multiple cameras. The 8 cameras needed to be fused as one view.

Andrej talked about how the neural net predicts what is ahead based on what it is currently seeing. This is what a human does when they see the road.

A big part of what Tesla does is mapping the area in real-time, whereas most other auto makers are using predefined maps. The predefined maps won't work long-term because the environment can change.

A member of the AI team was talking about how a car makes a lane change to the left in order to prepare for a left turn. In about 1.5 seconds, thousands of scenarios of that exact maneuver are analyzed and the car chooses the most optimal one. Incredible.

Tesla will not only be taking data from real world situations, it will also take that data and create a simulation like a game, which it will also use to train the FSD software. Wow.

Tesla has a number of tools to help its developers make changes to the neural network. I imagine that there's going to be a lot of checks and balances in place.

The goal of Dojo is to achieve the best AI training performance and enable larger and more complex nodes.

Tesla has designed its own chips and Dojo is on par with the super computers of the world and it is still not enough. They will still be building it to be more powerful. There are fast chips connected to other systems, connected more and more...

Tesla will continue to refine and upgrade its Dojo hardware. Elon expects it to be operational next year.

Tesla unveiled a humanoid-like robot and they want people to help work on it. It's goal is to be friendly and to do repetitive and mundane tasks.

What did you think of Tesla AI Day? Was it too technical? Is Tesla further ahead than we think?