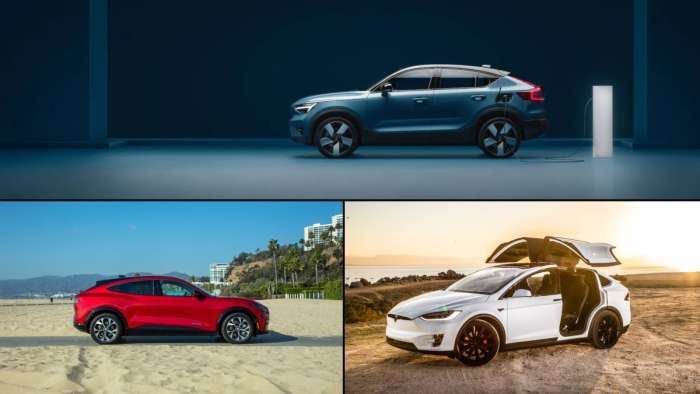 How The Volvo XC40 Recharge Compares To Other SUVs, Like The Jeep Wrangler 4xe

When I think of SUVs, I think of vehicles like the Jeep Wrangler, Ford Bronco, or Mercedes G-wagon. I typically don’t give much thought to Volvo, but I really should. Volvo’s XC40 Recharge is not just a handsome SUV, it’s got plenty of features that make it one of the safest SUVs on the market, and it’s faster than the Volkswagen ID.4.
Advertisement

I’ve opined lately that the SUV market in the United States is focused too much on luxury and comfort, and not enough on being useful; the Volvo XC40 Recharge manages to not just be luxurious and comfortable, but it also slings a whole host of really useful features at its driver.

Volvo has made the XC40 Recharge with safety in mind and as such, the vehicle is unfortunately a little smaller on the inside than some of its contemporaries, like the Toyota RAV4 Prime as more padding/impact resistance is built in. With a front leg room of 40.9 inches, it’s just a little bit smaller, but for some of us, every inch matters. The Volkswagen ID.4 is around the same at 41.1, but for tall folks, the Mustang Mach E offers 41.7. For comparison, my Challenger R/T gives me 42 inches to wriggle my toes in and It’s just about perfect for my height.

While Volvo’s XC40 doesn’t have much leg room in the front, it has a storage compartment and similar passenger space to the Toyota RAV4 Prime, which does not have a ‘frunk’. It’s a lot faster than the Volkswagen ID.4, with a 4.7 second 0-60 mile per hour sprint, but not quite as fast as the Mustang Mach E or Tesla’s offerings. It’s got a 6.9-inch ground clearance, shorter than the Toyota or Volkswagen, but a good inch taller than the other EV options. Ground clearance is useful for navigating rough terrain, like potholes, speed bumps, and potentially even roadkill, though I’d recommend avoiding straddling any debris in the road; it can be difficult to predict how what’s in the road will react to the passing vehicle.

Volvo has also given the XC40 its All-Wheel-Drive system that has proven to be effective at managing wet pavement, mud, and even a few rally races. Its 402 horsepower is provided by two motors, one at each axle. Volvo is known for excellent traction control, and many Volvo fans will say that it’s better than even Subaru’s Symetrical AWD (my personal favorite) so you can be sure that it’ll be on top of putting every one of those ponies to pavement. For going off-road, I will always recommend a vehicle that’s been built with that more in mind, like the Wrangler 4xe or Ford Bronco.

Traction control has its uses, but it typically tries to avoid wheel slip at pretty much all cost, so it can be detrimental in certain situations, like super slippery mud, or deep snow, where your wheels are going to spin a little whether they like it or not. It’s not uncommon for folks like me, obsessed with ‘being in touch with the car’, to drive manual transmissions, which can often stall out if traction control is left on in these particularly slippery situations. Because modern automatic transmissions let the computer manage the clutch for you, it’s a lot less problematic, but leaving traction control on in some situations can make it more difficult to control your car.

Electric vehicles have proven themselves functional in off-road scenarios. The Volkswagen ID.4 survived an amazing race. The Volvo XC40 Recharge does have an off-road mode which is not intended to be used at speed- it makes the vehicle slow to creep any time your foot isn’t on the accelerator, but off-road mode turns off if you get over 25 miles per hour. The Jeep Wrangler 4xe, while a hybrid, is just plain awesome and doing what Jeeps do- going off road. With modification, the Tesla Model Y is capable of off-road shenanigans, and the Model X has amazing power, but has been rated 1-out-of-5 by Consumer Reports. The Mustang Mach E is too low to use off-road in any meaningful sense.

The Volvo XC40 Recharge only offers an estimated 208 miles of range on a charge, but that’s a minuscule range compared to other BEVs. The Mustang Mach E gets between 211 and 300 miles on a charge; but has had some reliability problems mentioned on EV forums. The GMC HUMMER EV is supposed to get around 350 miles and puts out more than twice the horsepower of the Volvo XC40 Recharge, but let’s be honest, it’s 9000 pound weight and price point make it less attractive for off-roading. The Hyundai Kona Electric is by comparison stunningly mediocre with 258 miles per charge despite putting out 1/5th the horsepower of the HUMMER (a lot of that weight is clearly battery). The Kona is also not designed to be taken off the beaten path, so doesn’t fit my personal definition of SUV. The Audi e-Tron is a little worse for range than the Kona at 222 miles per charge, but still out does the Volvo XC40 Recharge.

I honestly can’t say that there’s a BEV out currently that I’d want to take out to the Rubicon Trail. The Toyota Land Cruiser EV that’s being developed with the help of a mining company would be probably be pretty awesome at it. If Ford chooses to release an Off-roading focused F-150 Lightning, it will be capable. When the Cybertruck finally arrives, I’m certain that they’ll have ‘taught’ it to be a goat in its own right. I will be honest, I have no idea if Tesla’s Full Self Drive would work off road. The Auto-pilot driver assistant seems to get a little confused going on grass.

I do like the Volvo XC40 Recharge. It has a handsome interior, a classic exterior, and amazing safety features, like collision avoidance and a back-up warning. It’s lacking in range, but as various charging networks spread and infrastructure becomes more reliable, range concerns will be less of an issue in the future. The all-electric Volvo ticks a lot of boxes for folks who live in an urban or suburban setting and I’m certain that it’ll do well.

Louvenia wrote on June 10, 2022 - 9:09am Permalink
Howdy just wanted to give you a quick heads up and let you know a few of the images aren't loading correctly. I'm not sure why but I think its a linking issue. I've tried it in two different web browsers and both show the same outcome. aid for ukraine