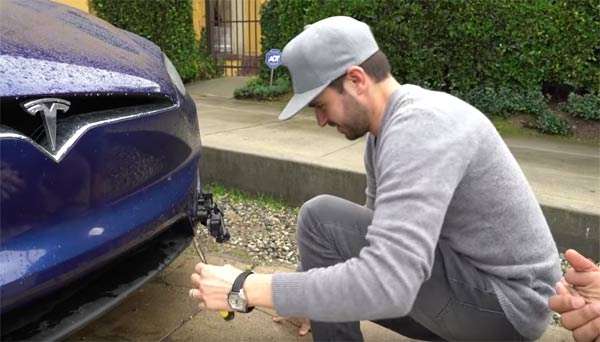 Tesla's 'Frunk' Can Be Opened Without A key: Is It A Massive Security Flaw?

Tesla's front trunk, known as the 'Frunk' can be accessed without a key and latest videos and social media news say this could be a potential security problem, but is it?
Advertisement

Tesla's front trunk, known as the 'Frunk' can be accessed without a key and latest videos and social media news say this could be a potential security problem, but is it?

Once you watch the video below from a Tesla owner accessing the front trunk or 'Frunk' of a Model X via the front panel on the vehicle without a key, it's initially very damning. The YouTube video below concerning the security flaw starts around minute 11 for your viewing pleasure, but is this so-called security flaw the big news it should be?

Apparently, there's method behind the madness for the hidden release, which is located in the front grille of the model X and behind the front wheel of a model S. Tesla have built-in this feature so that first responders can cut the power of the vehicle as quickly as possible as the voltage is always on and removal of the key from the ignition won't stop the current. So the 'first responder cut loop' is there for safety reasons. However, with a spotlight now been pointed on this feature, the initial safety precautions may be overridden by what could be seen as a security flaw.

However, it's obviously news to some Tesla owners and if you don't know it's there, it can seem like a big security risk. Tesla advise people not to store valuables in the front trunk and say that they should treat the Frunk as short-term cargo space, rather than a permanent storage for other items. It's unclear at this point if it's a matter of policy or not for Tesla to inform all vehicle owners of this feature at purchase or for current owners, but those unaware of the functionality may just start posting videos like the two guys have done already.

Tesla don't publicly announce how the front trunk can be opened by this method, but it seems many are startled by the apparent ease of access, even though the alarm is set off at the same time. Now the cat is out of the bag with these videos, the safety feature may turn into more of a security flaw, which may mean Tesla need to rethink the way emergency services can access a Tesla vehicle in the future.