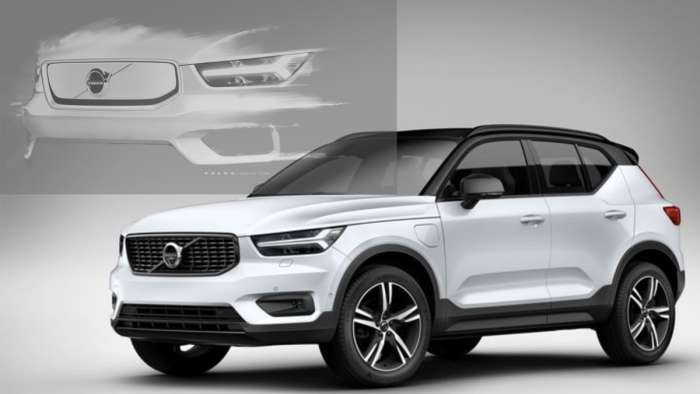 From fake grilles to wasted space, all-electric models from legacy automakers often fail to make the most of EV design potential. The Volvo XC40 Electric shows signs that this is starting to change.
Advertisement

Change is great… you go first.

When you’ve been building internal combustion engine (ICE) vehicles for decades, it can be hard to shake the habit of designing a car around the many moving parts and limitations of that drivetrain. Thankfully, with the Volvo XC40 Electric, the Swedish automaker is showing signs that established brands can move away from those limitations, even when it’s based on an existing ICE model.

The new electric version of the popular XC40 model won’t be fully unveiled until later this month, but these early indicators show that Volvo understands the opportunities of EV design.

Let’s take a look at those changes and where other automakers are doing the same. 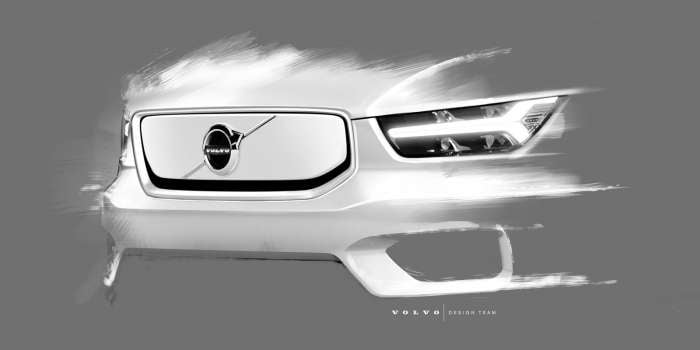 From Fake to Functional
A common bugbear of EV fans comes in the form of the fake grille. This is perhaps the single most visible sign that a manufacturer can’t quite shake those ICE design cues.

With a combustion engine exploding away under the hood, waste heat is produced and needs to be cooled. A grille allows air in to perform that function. A battery-electric vehicle has no such requirement, at least not to the inefficient extent of wasteful combustion, which is why you won’t find a grille baked into the front of a Tesla.

Offerings from established manufacturers don’t always acknowledge this fact, with results varying from unambitious to “didn’t even try.”

Even the ever-present Nissan Leaf, which has been a factor in the evolution of electric vehicles for almost as long as Tesla’s models, has struggled to find an equitable solution. The first-generation model, often derided for its bug-like visage, dropped any sign of a grille but added all kinds of panels and accents to the nose. The charge port flap is understandable, but the many indents and extra lines feel like a confused designer trying to fill space.

Come the second generation, which it’s widely agreed has a more appealing look, and Nissan adds a more familiar black panel where we’d normally expect to see the grille. The Chevy Bolt EV, one of the less conspicuous electric vehicles out there, follows a similar design fix by just slapping in some extra black plastic to break up space.

The 2020 Chevy Bolt EV makes a point of adding a high gloss black grille but retains the same design, leaving us to wait another model year to see what GM has in store for 2021, when a mid-cycle refresh provides the opportunity to reimagine the car's front end aesthetics.

Conversely, more recent arrivals like the Jaguar I-Pace and Audi e-Tron have moved the grille from fake to functional.

In the case of the I-Pace, Jaguar designer Ian Callum has explained that the grille acts as both an intake for air to cool the underlying battery and an aerodynamic feature that redirects airflow over and down behind the car. If you’ve ever wondered why the almost hatchback-esque form of the I-Pace doesn’t include a rear wiper, it’s supposedly because that redirected air is enough to clear the rear window of water.

Similarly, Audi claims that the e-Tron’s grille goes far beyond unambitious design. Underneath the standard-looking nose, adjustable flaps behind the grille open or close as the vehicle judges the front brakes or drivetrain require cooling. These intakes can also close to reduce drag and enhance the car's aerodynamic qualities. How much cooling the brakes require with the regenerative qualities of electric motors limiting the use of manual braking is open to question, but anyone who has tried to fast charge an excessively hot Nissan Leaf battery will appreciate any measures to cool the pack.

We don’t know much about the design as yet, but with the Volvo XC40 Electric it feels like the Swedish automaker is proud of the aesthetics that its designers landed upon.

Only a couple of elements have been teased thus far and Volvo chose to lead with two front-end items: the nose and the frunk. The former speaks to the visual potential of EV design, but it’s the latter that hints at automakers exploring the practical design benefits of an all-electric model.

Junk in the Frunk
Less visible, yet no less confusing than a fake grille, is the wasted space that many EVs from traditional automakers fail to utilize under the hood.

The front trunk – or “frunk” - is a common talking point when you pop the hood of a Tesla. Beyond storing basic sports bags and charging cables, entire memes have sprung from the Tesla frunk. Everything from fake comedy batteries to the #FrunkPuppy phenomenon can be traced back to Tesla’s desire to think differently than their established peers. 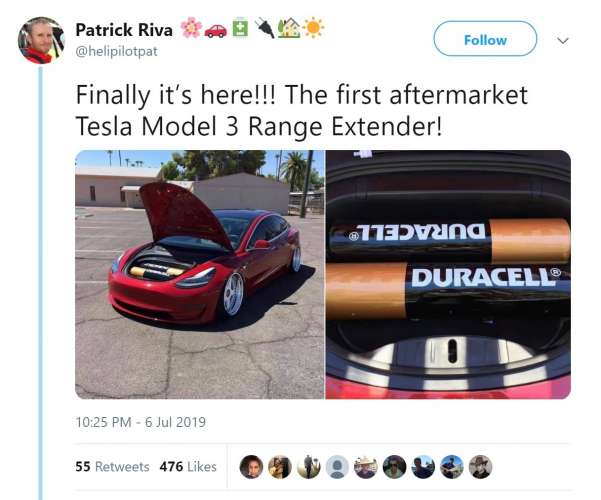 Expensive competitors like the Audi e-Tron and Jaguar I-Pace have again made progress in this area, with both sealing away the mechanics and offering a small storage compartment under the hood. It only amounts to around 1 ft3 of extra space, matching the more affordable Tesla Model 3 but still trailing some way behind the comparatively cavernous frunks of the Model S and Model X. Nonetheless, any frunk is a welcome addition and a sign that the manufacturer is open to the needs of EV drivers.

At the affordable end of the market, frunks are unheard of unless you stump up a little extra for an entry-level Tesla Model 3. Open up a Nissan Leaf or Chevy Bolt EV and you’ll find plenty of equipment but no attempts to integrate storage space. To its credit, the Bolt EV takes the opportunity to tighten up space and reduce the length of the vehicle, which adds to its maneuverability in city driving.

Worse still, the Kia Niro EV and Hyundai Kona Electric are reworked versions of existing ICE models, meaning very few design cues specific to EVs and lots of wasted space under the hood. Some enterprising owners have shown what storage might be possible if the South Korean manufacturer decides to consider the needs of its all-electric customers in future.

Volvo’s early October leaks of the XC40 Electric show that the car will include a frunk that utilizes much of the hood’s width. Its depth is unlikely to be much different from the I-Pace or e-Tron, meaning there’s probably very similar space in there, but it’s another EV-only feature that the company has chosen to highlight.

Other advantages of EV design to watch for in upcoming models include increased cabin space upfront, as the Chevy Bolt EV achieves with its floating center console, as well as a flat floor in the back that makes the car more comfortable for rear-seat riders. With no need for a transmission column running along the center of the vehicle and a mostly flat battery pack lying beneath the chassis, several aspects of vehicle design can be reimagined in an EV.

We’ll have to wait until October 16th to find out if there are other EV advantages baked into the Volvo XC40 Electric, but the signs are there that this is another established brand starting to properly acknowledge the transition to electric vehicles.

At a corporate level, Volvo has set a five-year target that 50% of new car sales must be electrified vehicles, meaning hybrids as well as all-electric models. The nuance of that target gives the company a lot of room to maneuver, but the announcement of the Volvo XC40 Electric and the continuing progress of the tech-forward Polestar brand both point to signs of life on the all-electric side.

Do you think legacy automakers are finally starting to embrace the design potential of all-electric models?

Let us know what you’d like to see on future models in the comments.

Also Watch One Design Element We Love About the Interior of the 2019 Volvo XC90. Click To Subscribe to Torque News Youtube Channel for Daily EV and Automotive News.

DeanMcManis wrote on October 5, 2019 - 2:25pm Permalink
Interesting points Steve. First, with regard to the grills on EVs, it is true that EVs do not have the same cooling needs that ICE (internal combusion engines) use, but the batteries, inverters and other electronics still do need active cooling. Often using recirculating glycol like an ICE engine does. Plus the vehicles need fresh air for the cabin. Certainly they do not need the huge gaping grill of the Audi E-Tron, but some things are also done for image and marketing (like Porsche calling the Taycan EV "Turbo"). It is true that big car companies often do not want to stray away from traditional designs. So Hyundai, VW, Fiat, Ford and GM kept the front engine design of their ICE cars and just fitted the battery to their existing vehicles. The Bolt does use a flat tray battery like the Tesla for more efficient cabin space utilization. Tesla definitely bucked the trends in taking away the grill and making front storage space available. It was a risk in alienating traditional customers, but it also draws in potential new customers who like the idea of fresh designs that serve the customer's needs rather than merely follow tradition. I think that there is a balance between offering traditional looks, or making a different vehicle design that shouts out that this is an EV! like the older Leaf, Prius, Mirai, and BMW i3 that many people do identify as being unusual, but others of us who see them as awkward designs. Remember the Ford Edsel that was so "ahead of it's time" and unusual, that most potential buyers were turned off by the design. So I think that since EVs are still only 3% of new car sales, automakers will continue to stay away from vastly different, radical, new designs that could scare away new customers who have probably never owned an EV before.