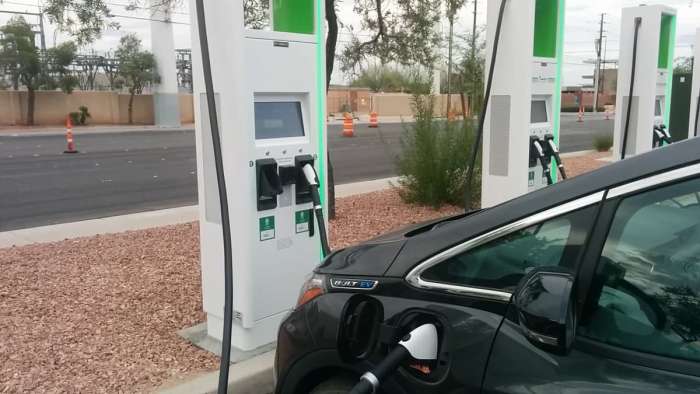 Will the 2020 Chevy Bolt EV be more of the same or can it shock the competition? GM just might have a few cards up their sleeve.
Advertisement

How important is 21? Sure, in terms of Blackjack or being able to join your friends at the bar, 21 is quite important. But what about when it’s a 21-mile EPA range increase for an electric vehicle?

GM recently shocked the EV world with their announcement that the upcoming 2020 Chevy Bolt EV would have an EPA rated range of 259 miles (a 21-mile increase from the 2019 model year). That 21-mile increase in range catapulted the Bolt EV past several recent competitors: the KIA Niro EV (239 miles), the Nissan LEAF e-Plus (226 miles), and the Tesla Model 3 SR+ (240 miles). It even edged out the previous king of budget EV range, the Hyundai Kona Electric (258 miles). 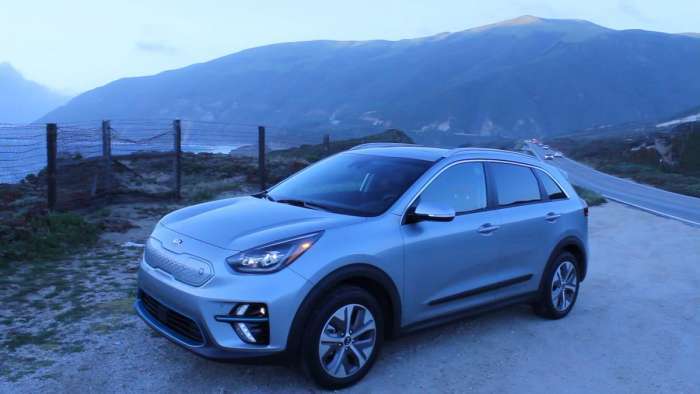 The GM announcement seemingly came out of nowhere because most of the EV media had been downplaying or ignoring the regular (though less dramatic) updates that GM had already been making to the Bolt EV since 2017. One of the most notable complaints about the Bolt EV was the lack of padding in its front seats, something GM promptly improved. The original Hilltop Reserve Mode, which locks away the top 12% of the battery’s capacity, was later replaced with a much more dynamic Target Charge Level feature, enabling owners control the charge level of their batteries in 5% increments. Some Bolt EV owners have even reported that GM had increased the Bolt EV’s peak charge rate to 60 kW under some circumstances, though that is yet to be corroborated. 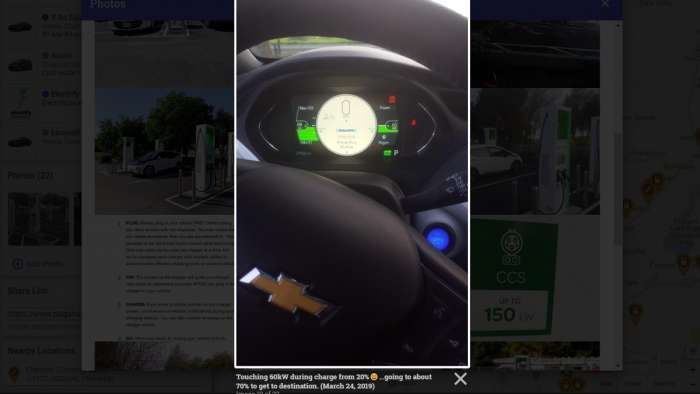 Regardless, none of those subtle improvements were enough to prompt widespread acknowledgment. What about 21 miles of EPA range? Well now, that’s news! But is that range increase, on its own, enough to win over people who had already passed on the Bolt EV? The simple, obvious answer is, “No.” Critics of the Bolt EV have a long list of demands for GM, requiring everything from heat pumps and HomeLink to Super Cruise and Supercharging. A paltry 21 miles of range isn’t likely to sway them. The truth is, while the Bolt EV has been widely criticized for a number of things, range was not one of them. So the 21 miles of range doesn’t matter at all, and Bolt EV sales will continue to languish, right? It’s really quite simple.

However, discussions about GM electric vehicles are rarely simple, and much like the numerous, uncelebrated Bolt EV improvements over the years, there were other overlooked subtleties in GM’s 2020 Chevy Bolt EV press release. The most notable was that, despite the new battery’s having 6 kWh of additional energy (a 10% increase), the listed weight of the pack had decreased by 13 lbs. That means that, on the pack level, GM’s new battery matches the energy density of Tesla’s state-of-the-art 2170 Panasonic cell battery pack in the Model 3 (a battery that Jack Rickard described as looking like technology from an “alien spacecraft”).

Certainly, GM must have simply reconfigured the battery pack’s structure and smashed more cells into it, as Nissan had done with their LEAF e-Plus, right? That doesn’t seem likely. GM clearly stated that the 2020 Bolt EV’s battery was “new chemistry,” implying that, at the very least, they updated the cathode material. The 2017 to 2019 Bolt EV batteries use an NMC 622 cathode (a ratio of six parts nickel, two parts manganese, and two parts cobalt). A PushEV’s article provides further insight, citing an interview with a representative from LG Chem (the company responsible for manufacturing the Bolt EV’s battery cells). In that interview, the representative (LG Chem CFO, Chung Ho-Young ) stated that LG would start mass producing NMC 721 (seven parts nickel, two parts manganese, and one part cobalt) pouch cells as early as 2020.

The increased nickel and reduced cobalt in the NMC 721 cathode represent an increase in energy density and decrease in cost, respectively. The increased energy density is already clear from GM’s press release, so perhaps a more intriguing question is cost. GM CEO Mary Barra stated in a 2017 presentation to Barclays that GM’s next batteries would represent a significant cost improvement, a 30% cost reduction (from $145/kWh down to under $100/kWh). In CARB compliant states, where GM could offset costs with ZEV credits (such as California), they were already able to sell the Bolt EV with significant discounts below MSRP; however, prospective buyers in non-CARB states saw few if any discounts. If the batteries in the 2020 Bolt EV do in fact cost 25% less for GM to produce ($6,600 versus $8,700), that could give GM more flexibility in offering nationwide discounts on what is already one of the most widely available EVs in the U.S. market.

The change in cathode chemistry has other downstream effects as well. While many focus primarily on battery chemistry and heat dissipation as the key governing factors in a battery’s maximum charging rate, electrode thickness also plays a significant role. Batteries with thinner electrodes have the ability to recharge more quickly, even when they are made with older, less energy dense battery chemistries. Examples include the Chevy Spark EV an Hyundai Ioniq Electric, both of which can recharge at peak speeds of 2.5 C (a rate that would recharge the battery from empty to full in 24 minutes, though that rate typically isn’t sustainable past 80% battery).

And that brings us to what is possibly the biggest criticism of the Bolt EV: Its charging speed. It really doesn’t matter that the Bolt EV charged faster than any public charger available at the time of its release. The only thing that matters is that Hyundai, Kia, and Tesla all subsequently released similarly priced EVs that charge at a faster rate. Again, the simple answer is that the Bolt EV will have the same, slow charging rate because GM’s press release continues to say the same, inaccurate “90 miles in 30 minutes” that it has always listed. However, that “90 miles in 30 minutes” rating is also used by other automakers, such as Nissan, and they are mostly likely referring to the 45 kW charging speed limit of the most common public DC fast chargers rather than the actual limitations of the vehicle. In other words, they are setting expectations based on the chargers their drivers are still most likely to use.

At a minimum, the 2020 Bolt EV should maintain its 1 C charging rate, which would mean an improved peak charging of 66 kW. While that wouldn’t push the Bolt EV past competitors like the Kona Electric and Niro EV, both of which can see over 75 kW peak charging rates, it does narrow the gap significantly. In real-world terms, there would be less than a 5-minute difference between charging from empty to 80% in any of those vehicles. 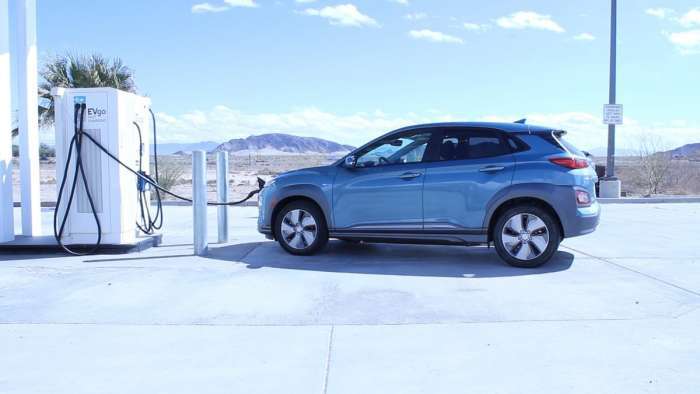 However, there is reason to believe that GM will push the charging rates much higher, if the battery chemistry and electrode thickness allow it, and we might already have evidence of that. VW recently unveiled their ID.3, stating that it would charge at a peak rate of 125 kW (presumably the charging rate for the 77 kWh battery). VW also stated that they would be purchasing cells from LG Chem at a similar price point as GM (about $100/kWh), and if so, that 1.6 C charging rate that VW described could hint at what the upcoming Bolt EV’s peak charging rate will be. If GM and VW are using similar cells, the 2020 Bolt EV could see a peak charging rate of over 100 kW, matching the Tesla Model 3 SR+ and blowing past all its other competitors. The only other exception might be the Nissan LEAF e-Plus, though its lack of active thermal management and the relatively few CHAdeMO chargers that can provide faster than 50 kW charging speeds brings the LEAF’s claimed 100 kW charging into question – a tale for another day.

The Bolt EV won’t see an interior or exterior refresh until the 2021 model year, and no other functionality changes have been published. However, despite not addressing criticisms such as a lack of driver assist functionality and interior accoutrements, the Bolt EV represents a solid, widely available foundation, and this updated battery will significantly improve its functionality and price compared to its competition. Ultimately, though, the question of whether GM can woo new Bolt EV customers with the 2020 model will come down to how far they are willing to push its peak DC fast charging rates.

So it appears that GM just doubled down on a solid 10, and only time will tell whether they were dealt an ace. If so, 21 might just be significant after all.

For another take on the 2020 Chevy Bolt EV, please check out my colleague, Steve Birkett's article on why the jury is still out. See you in my next story.

Eric Way focuses on reporting expert opinion on GM brand electric vehicles at Torque News. Eric is also an instructional designer and technical writer with more than 15 years of writing experience. He also hosts the News Coulomb video blog, which focuses on electric vehicles, charging infrastructure, and renewable energy. Eric is an active member of the EV Advocates of Ventura County, a volunteer organization focused on increasing the widespread adoption of electric vehicles. You can follow Eric on News Coulomb Youtube, on Facebook at @NewsCoulomb as well as on Twitter at @eway1978.

Duke Woolworth wrote on September 17, 2019 - 2:43pm Permalink
We just bought a Bolt at $12,000 off sticker. It's quiet, but not a smooth ride. It's missing HD radio and automatic rear braking others adopted some years back. Back seat with completely flat floor is bigger than expected in a small car, and "miles" bigger than a Kona, for instance. Charger uses tiny 18 gauge wire, so 16 size wire extension cords work, though somehow our garage is underpowered and won't actuate the charger. More money should fix it.
David wrote on September 17, 2019 - 4:49pm Permalink
Good article! My hope is that Eric Way is correct, that GM will increase charging speeds on the 2020 bolt. It would be nice if they gave the 2017-19 bolts a little bump in max charging rate and maybe bump the time/soc% it charges at those rates as well.
Markley wrote on September 17, 2019 - 4:49pm Permalink
Well, it definitely won't shock the competition. Would love to see at least 100k charging though.