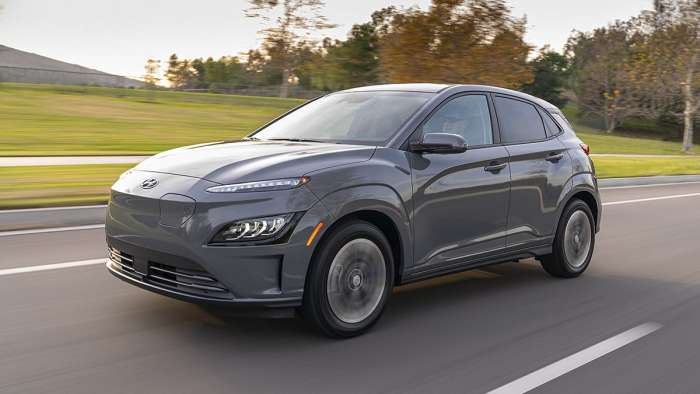 Two EVs were unveiled this week: the 2022 Hyundai Kona and the 2022 Chevrolet Bolt. Which is the better choice?
Advertisement

Celebrate the Ides of February 2021. It’s when two compelling electric vehicles were introduced: the 2022 Hyundai Kona and the 2022 Chevrolet Bolt. See which one is the better choice by the numbers.

The 2022 Chevrolet Bolt was the first introduced, quickly followed by the 2022 Hyundai Kona. Let’s not focus on the Bolt EUV at this point solely because the Bolt EV and the Kona are more alike.

Since its market introduction in 2017, global sales have topped 100,000 for the Bolt and it has generated some of the best satisfaction and loyalty ratings in the industry, according to Chevrolet. In the U.S., three-quarters of Bolt EV buyers are new to GM. 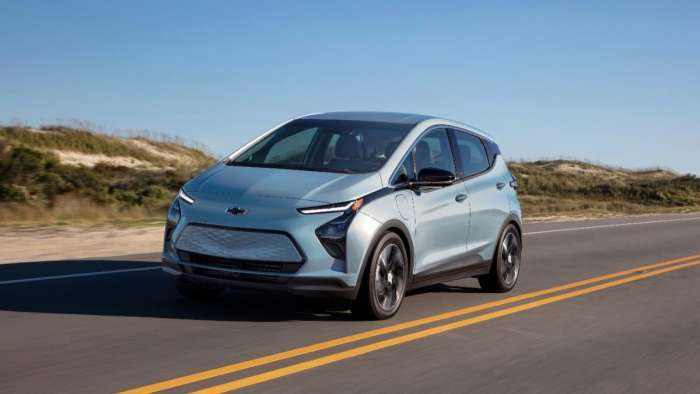 The Power Range Wars
The Hyundai Kona Electric powertrain employs a high-efficiency 150 kW (201 horsepower) permanent-magnet synchronous electric motor supplied by a high-voltage 64 kWh lithium-ion battery. The motor develops 291 lb.-ft. of torque distributed to the front wheels. The battery system is liquid-cooled and operates at 356 volts. It has an estimated range of 258 miles.

An advanced 65 kilowatt-hour, lithium-ion battery pack helps the Bolt EV deliver up to a GM-estimated 259 miles of range on a full charge. A single-motor drive unit delivers 200 horsepower (150 kW) and 266 lb-ft of near-instant torque. The battery system features Chevy’s proven active thermal management system, which uses coolant to maintain the battery at its ideal operating temperature.

The Charging Specs
There are some charging differences between the two. Hyundai says the Kona EV can go from 10% to 80% charge in 47 minutes, which means from about a 26 mile range to 206 miles. Hyundai said in a presentation earlier this week the new standard for measuring fast charging is starting from 10% because few if any EV owners take their vehicles down to zero.

Chevrolet says the Bolt EV can charge to 100 miles range in 30 minutes. It appears that would be from zero. So, using the 10% base, presume it could from 26-mile-range to 126 miles in 30 minutes, or almost 50-percent range. In that respect, Hyundai wins the charging war for high-speed charging. 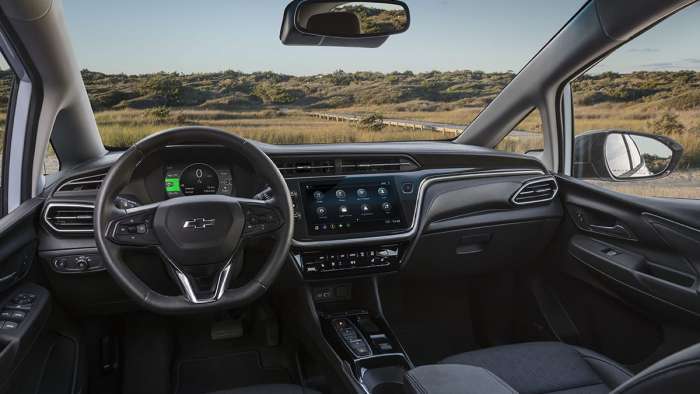 Otherwise, the nod has to go to Chevrolet. A 240-volt full charge takes seven hours, according to GM. Hyundai says the Kona charges using the same technology in 9.25 hours from 10% to 100%. Plug either car in after dinner and it’s ready to go by breakfast the next morning.

Hyundai hasn’t announced pricing for the Kona but it might have to match the Chevy price drop if it expects to sell many. Otherwise, Hyundai is going to have trouble moving many models on U.S. dealer lots.

Which would you buy? Should price be the only consideration? Comment below.

Timothy Parker wrote on February 20, 2021 - 11:12pm Permalink
As usual, there is more to it than just price and I don't have all the specs. But, as a Bolt owner, I think the Kona is definitely a better-looking car. GM fiddled with the styling and it is an improvement, but still falls short. The Kona is also 4WD and has roof rails, only available on the Bolt EUV Premier which is considerably more expensive. In the interior, I'm not a fan of displays that stick up out of the dash like in the Kona. The Bolt display is much more nicely integrated. So, if the Kona starts at $38k then I think the nod goes to the Bolt, but if it is $33k then maybe the Kona. If the Kona is $34k then it's unclear. For those who aren't price sensitive and usually go with the higher trim levels, the nod might go to the EUV Premier since it has all the bells including Supercruise, but again, it depends on the details.
DeanMcManis wrote on February 21, 2021 - 3:51am Permalink
A couple points...The Hyundai still qualifies for federal tax subsidies of $7500, and both of the BEVs qualify for additional state and regional subsidies, depending on the area. So as it stands, the Hyundai could be cheaper overall right now, compared to the new Bolt. But there is a bill in play that could extend the expired federal subsidy for Chevy and Tesla, taking another $7000 off of their price. This could potentially put the base Tesla Model Y starting at $33K net, and the new Bolt at $27K net (and the Bolt EUV at $29K), before other subsidies and rebates. So the value proposition could change dramatically soon, but nothing is guaranteed. I have some friends who love their Chevy Bolts, and this refreshed model addresses most issues that early buyers had with the original Bolt. Similarly I have a friend who owns the EV Kona, and he loves his as well.
Judson Cohan wrote on March 8, 2021 - 4:51pm Permalink
I would point out that there are plenty of other factors to consider beyond price and charging speed. For example, my wife (who has some minor mobility issues) found the Kona to be vastly easier to get into and out of. I also found the Kona to be more comfortable to sit in, although it wasn't a huge difference.