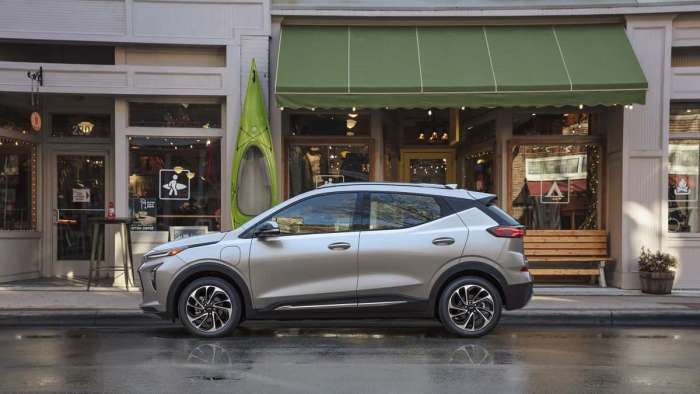 The more we learn about the new Chevy Bolt EUV, the more mixed feelings we have about it. We break down what we feel are the new 2022 Chevy Bolt EUV's strengths and its weaknesses.
Advertisement

General Motor’s all-electric future takes another step forward this coming year when the existing “give-away” Bolt design is replaced with two new models for the US market. We say “give-away” because that is basically what GM is doing to move these unwanted EVs off dealer lots. Discounting from GM and its dealer network is now approaching $20,000 and with no state or federal incentives, new Chevy Bolts now cost buyers between $20K and $26K.

The new 2022 Bolt is pretty much the old Bolt that went on sale in 2016 with a new skin and wireless Android Auto and Apple CarPlay. Sure, there are some other differences in the body skin and interior trim, but none that will make any buyer want to rush out and pay more than the $20K they now cost.

The 2022 Bolt EUV is a new model that is a larger version of the Bolt hatchback. Here are three ways we feel the new Bolt EUV fails and a couple of ways that we think it advances the Bolt line.

Bolt EUV Failure Number One - No Ultium Batteries
General Motors is designing a new modular battery and powertrain technology called Ultium. To say it is a “bet the farm” move is not really an overstatement. GM tells us some great things about this new technology, which is being created in a partnership. We are willing to believe all of it and say “game-changer." The new Bolt EUV does not have this EV powertrain and battery technology. Instead, it gets the same technology launched in 2016.

Related Story: Plug-In Hybrid Crossovers Are Better At Towing Than Battery-Electric Vehicles Like The Bolt EUV

The Bolt EUV is a front-wheel drive car. It will use the same drivetrain the current Bolt hatchback has, more or less. Less if you count range. The Bolt EUV is expected to have a range of just 250 miles. With no AWD option, the Bolt EUV won’t be pulling your boat up a slippery slimy boat ramp this summer. With 2WD and its super-hard, low-rolling-resistance tires, it won’t make for a great snow day commuter car either. These are two real-world utility scenarios.

The Bolt EUV will be a bigger version of the Bolt in the way the Prius V was a bigger Prius. It will have similar capabilities and may end up being much loved by its owners for its large cargo area. But that is the end of its “utility” role. 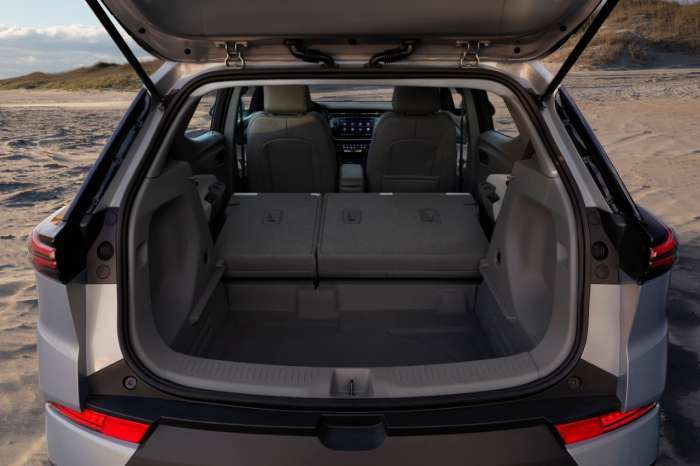 Bolt EUV Fail Number Three - Cargo Floor
The cargo area of the new 2022 Bolt EUV is the big focus of the new model. We can’t see any other area in which it meaningfully tops the 2016 Bolt hatchback. However, one glance at the cargo area shows that when the rear seats fold, they do not fold flat. For those who camp, or use their car for moving heavy bulky items, a flat cargo floor is a priority. And the Bolt EUV does not offer a flat cargo floor area.

Want a second preview opinion of the 2022 Bolt EUV? Check out the video above by TFL Studios.

Bolt EUV Improvement Number One - Supercruise
The outgoing Bolt was a technology leader in 2016, but by 2021 its tech was not that hot. Don’t get us wrong, we actually love the package the Bolt offers, but many folks expect an EV to be ultra-modern. One area that the 2022 Bolt EUV ups the ante is with GM’s SuperCruise. GM first announced this technology in 2011. This ten-year-old hands-off adaptive cruise control with lane-keeping system is a hit with reviewers. The Bolt and Bolt EUV should be the least expensive GM vehicles to feature this technology. 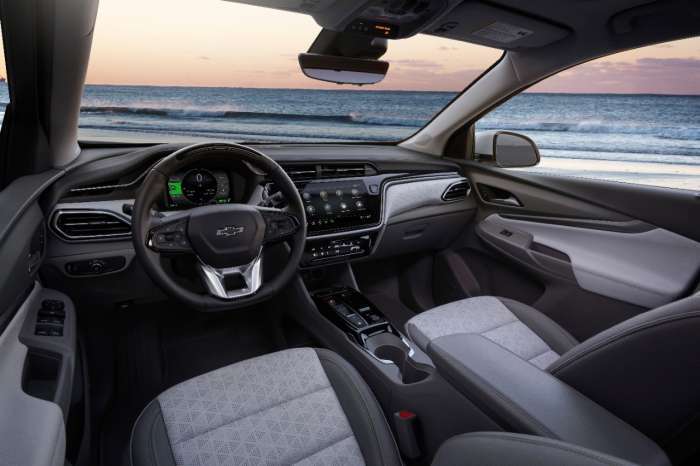 Bolt EUV Improvement Number Two - Infotainment
GM will offer wireless Andriod Auto and Apple CarPlay as well as a wireless phone charger in the Bolt EUV. This is an important technology pairing for those of us who prefer to not to pay thousands for a built-in Nav system and those who don’t want the monthly payment of a subscription to OnStar. It is good to see GM matching vehicles like the 2021 Hyundai Elantra in offering this now mature technology.

We look forward to driving the new 2022 Chevy Bolt and Bolt EUV and finding more good things to say about them. We still don’t have all the details yet. We don’t know if GM stole the spare as it did in the current Bolt, if the vehicles are fun to drive (the outgoing Bolt sure is), and if the discounting will match the $20K to $26K cost point buyers have come to expect when shopping for a new Bolt. Watch Torque News for updates.

Lucy Cooley wrote on February 15, 2021 - 1:23pm Permalink
Fourth fail, and this is the biggest imho: no upgrade in dc fast charging. Still 55 kw max, as opposed to Tesla 250 and Porsche 300.
John Goreham wrote on February 15, 2021 - 2:17pm Permalink
Thanks for adding that, Lucy. I considered it, but with our polling showing that almost all GM EV owners charge almost exclusively at home, we were not sure if we should highlight it. But you did :)
DeanMcManis wrote on February 15, 2021 - 3:03pm Permalink
The Bolt is designed and built to a price point. And for now, the Bolt and EUV model are the only two EVs that GM sells. I agree that (like the Nissan Leaf) Chevy has the problem that older models have dropped off in price, so it is hard to justify a $33K price for a vehicle that is just a refreshed model (the 2022 Bolt). To Chevy's defense, they have addressed nearly all of the main concerns of existing owners with the '22 Bolt and EUV models. Regarding the batteries. Ultium is just a marketing name. LG Chem has produced the Bolt's batteries, and they will have many types of batteries that are packaged as Ultium. The 2020 and newer Bolt battery pack has been very competitive, so I do not see this as an issue, especially at this lower price point. Speaking of price point I don't see other $33K EV crossovers with AWD, do you? The Bolt and EUV models are transition EVs for GM as they expand their fleet of new models. AWD would be cool, but I don't see it in GM EVs until their next gen of clean slate EVs come out. When Chevy first announced the Bolt EUV I really thought that they were going to drop two Bolt engines into their Trailblazer to make a 400HP EV crossover to directly compete against the Mach-E (and RAV4 Prime), but GM was not that bold, so we are getting the current evolutionary models. If GM gets their federal subsidies back, then I think that the refreshed Bolt and EUV models will be a relative success and competitive with their net price at the low to mid $20k level.
Lucy Cooley wrote on February 15, 2021 - 3:17pm Permalink
Charging at home over night is awesome for all EVs. However, living in an apartment makes this convenience moot. And for the Bolt, with a range of approximately 250 in mild temperatures, the range will go down by as much as 50% in the winter driving at freeway speeds. Being able to charge up to 80% (charging speed slows significantly above 80% to protect the battery) at a dc station at 250 or 300 kw will take at most 15 minutes versus 45 minutes at 55. A huge difference for apartment dwellers and road trippers.
Timothy Parker wrote on February 15, 2021 - 8:20pm Permalink
I think what is really needed is fast chargers at places where people routinely go, like grocery stores and shopping centers. Some are already there; more are needed. If people could plug in their Bolt for a half hour or so while grocery shopping, charging really wouldn't be much of an issue. Charging infrastructure remains a big challenge for mass EV adoption.
Timothy Parker wrote on February 15, 2021 - 8:13pm Permalink
Battery chemistry was updated in 2020 resulting in a 10% increase in capacity. Other drivetrain components are the same. But, is there something wrong with those components that needs upgrading? I don't think so. Big trucks still operate with components designed in the 1930s. AWD would be nice for some, but not needed for most. This is not an SUV after all. A good set of snow tires is all most need for winter driving. As this excels as a low-cost local car, upgraded fast charging is not very important. Most people make few long trips, and those that do would be better off looking at other cars. I'm not sure what the Ultium battery would do for it, unless they increased battery capacity. But for its intended purpose, the current battery is absolutely fine. GM is building out a full line of EVs. They needn't be all the same. Future models will fit other niches, and those will include models with more robust use cases. The few percent of people who make lots of long trips want faster charging, the other 97% aren't clamoring for it. GM did deliver on what most people actually were asking for while keeping within their use case and price target.