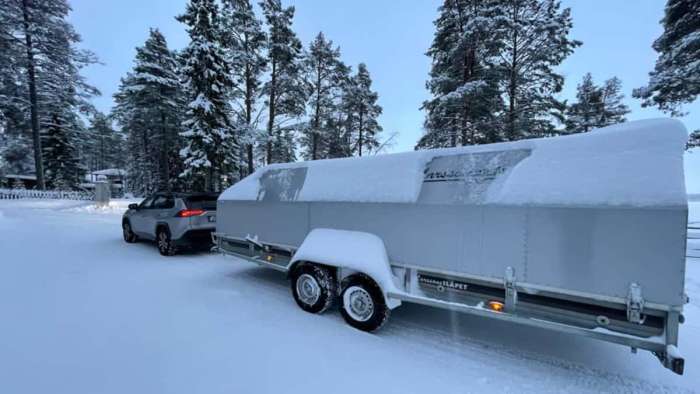 Vehicles like the Toyota RAV4 Prime plug-in hybrid crossover utility vehicle are more practical for towing than are battery-electric vehicles like the Tesla Model Y. Here’s what experts and owners say are the reasons.
Advertisement

As America moves solidly into green crossover SUVs for their family and utility vehicle needs, one previously overlooked advantage of plug-in hybrid-electric vehicles (PHEVs) like the new Toyota RAV4 Prime is becoming apparent. Particularly when compared to battery-electric crossovers like Tesla’s Model Y. That advantage is towing practicality. 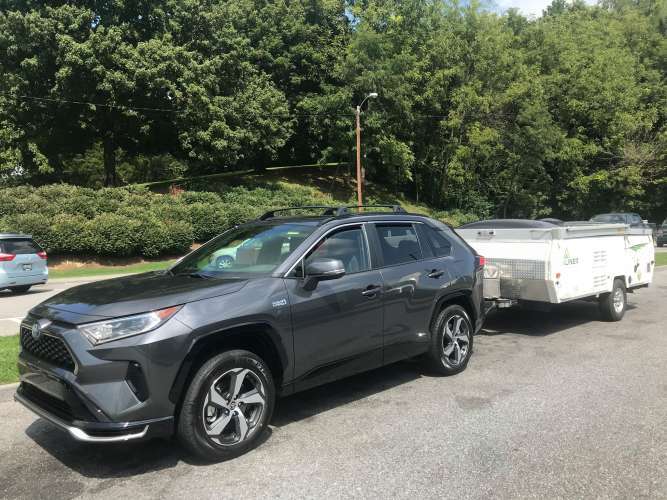 BEV vs. PHEV Range
Battery-electric vehicles (BEVs) like the popular Tesla Model Y have a more limited range than plug-in hybrid electric vehicles. For example, the most recently released “base” trim of the Model Y has a range rating of 244 miles. By contrast, the similarly-sized Toyota RAV4 Prime PHEV has a range of 600 miles. However, both of these ranges relate to normal, non-towing situations.
Related Story: Woman Tows Tiny House Cross-Country With Mitsubishi Outlander PHEV 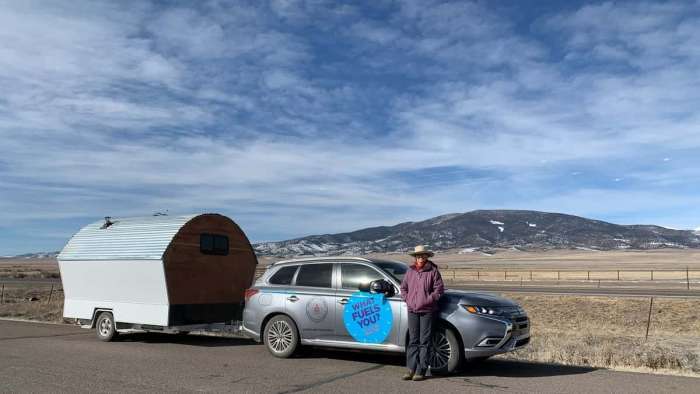 Range Reductions When Towing
Torque News asked an expert on towing how much a vehicle’s energy consumption (MPG or range) is reduced when towing a trailer. Our own editor, Patrick Rall, doesn’t just tow in his personal life, he tests new vehicles while towing loads. We asked Patrick what his general experience has been with regard to energy consumption when towing and he told us, “My current truck when towing on the highway gets about half of the mpg that it does without the trailer. I've seen a similar drop with test vehicles.”

It only makes sense that range drops dramatically when towing. Vehicles like the Toyota RAV4 Prime can tow loads up to 2,500 pounds. That is about two-thirds of the vehicle’s own weight. So, obviously, energy consumption goes up dramatically when a vehicle tows a load. How much will depend primarily on the weight of the load and the driving conditions. The video above goes into great detail on the mathematics proving why battery-electric vehicles, particularly crossovers, are not well suited to towing. 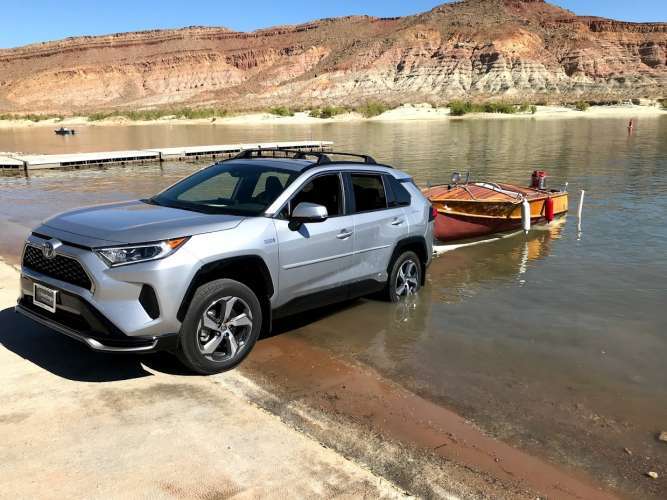 Of course, range drops apply to all vehicles in cold weather to a degree. In the case of the RAV4 Prime, its 42 miles of EV range would be reduced. To its credit, the RAV4 Prime does use the most modern HVAC system, a heat pump, to minimize that drop. Without its EV battery offering any range assistance, the RAV4 Prime still has a gasoline hybrid-electric range of 498 miles. Double the best-case scenario for a Tesla Model Y of similar cost.

Range Drop Calculations For Cold Weather Towing- Model Y vs. RAV4 Prime
Let’s do some quick math and be very favorable to the Tesla Model Y. We will assign a 20% range drop due to cold weather and a 30% drop due to the trailer load. Let’s assume we are towing a snowmobile trailer to the trailhead in winter.

Now let’s do the same with the Toyota RAV4 Prime. We will assign a higher 30% cold-weather reduction of the traction battery’s range, dropping that to 29.4 miles. Next, we will reduce the hybrid-electric range by 20%, which is more than we think such a vehicle would drop by a factor of 2X. We will then apply a 50% drop in range due to the load. Again, 20% more than we applied to the Tesla BEV. In every case we are assigning a much higher drop to the RAV4 Prime than the Tesla, but being conservative since we are making the point that the PHEV is better suited to winter towing.

As we have demonstrated, a RAV4 Prime has a very conservative real-world snowmobile towing range in winter of about 213.9 miles compared to a Tesla Model Y of equivalent cost’s range of about 136 Miles. So what happens if we need to add energy and range miles during the trip? As it turns out, the Toyota RAV4 Prime’s second advantage now comes into play. 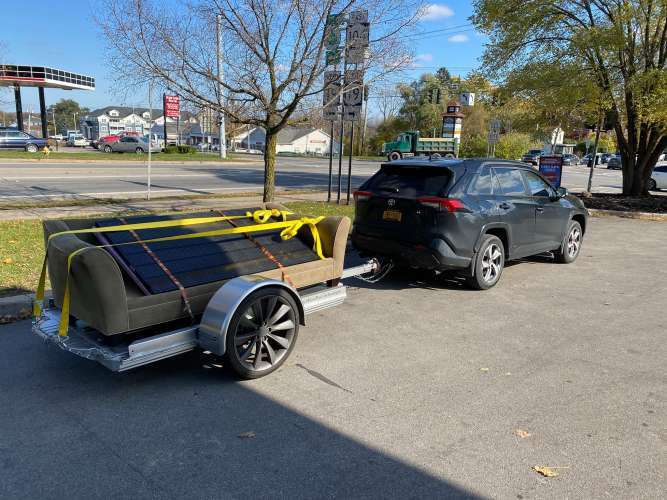 Charging and Fueling Practicality BEVs vs. PHEVs
How does one add energy in a practical way to a Tesla towing a snowmobile trailer? Would a crowded Supercharger be an option? Not without uncoupling the trailer or having it stick out into the parking lot or lane. The same is true at a public charger. We asked towing expert Tim Esterdahl of Pickuptrucktalk.com if this is a real scenario. Tim has been examining battery-electric pickup truck market development. Tim told us, “Charging a BEV with a trailer is a big concern I've seen raised several times. The charging stations make it a bit of a challenge. The charging system was designed for electric cars (without trailers). I don't see any logical way to do any extensive towing with a BEV.” As we have seen, "extensive" in the case of a base Tesla Model Y can be anything beyond 136 miles. Round trip.

By comparison, a Toyota RAV4 Prime can be pulled into any gas station and fueled up. In a matter of a few moments, the vehicle can add back another 200 or more miles of driving range. And you can fill up the snowmobiles as well. You need not uncouple the trailer. A quick stop on any street corner or off almost any exit in America and you can add back three hours of winter highway towing time in minutes.

Related Story: Shopping Guide 2021 – Why You Should Demand A Spare Tire With Your New Vehicle 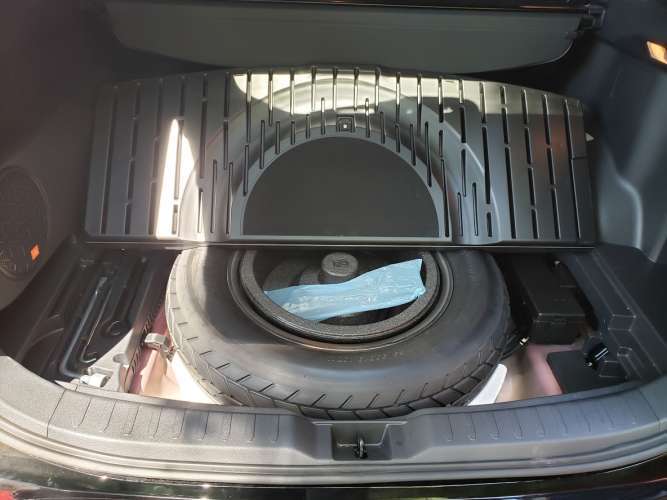 Spare Tires When Towing
There is one more reason that the Toyota RAV4 Prime we are using in our example is more practical for towing. Every trim of the RAV4 Prime (or Hybrid, or any other RAV4 trim for that matter) has a spare tire. No trim of any Tesla model has a spare tire. How will the Tesla owner deal with a flat tire on the highway or at the trailhead in the woods when towing a trailer?

Another popular towing activity where I live is taking home improvement debris, trash, or brush to the town transfer station on a small trailer. Unfortunately, there are a lot of flat-tire hazards at these places. How will the Tesla owner deal with a flat tire in this scenario? Without a spare tire for the vehicle, options become very limited in winter. When AAA arrives, what then happens with the trailer? As you can see, a Model Y is not a “utility” vehicle in some ways by comparison to the RAV4 Prime example.

Real Owners of PHEVs Tow
In our recent research, Torque News found that some RAV4 Prime owners are also current or former Tesla owners. We also did a deep dive on why one owner purchased a RAV4 Prime instead of a Tesla Model Y or Honda CR-V Hybrid. Owners pointed to real-world towing practicality as one of the reasons they opted not to buy a BEV Tesla. One owner wrote, “ “Backcountry camping with tow capability was an extra plus. I do 99% of in-town miles in EV. Nice to do everything with one car.” Real-world green vehicle shoppers are aware of the limitations of BEVs when it comes to towing. Another RAV4 owner who previously owned a Tesla Model X, Jim Klafeh, told Torque News, "My RAV4 Prime is an excellent towing vehicle. It’s like the trailer isn’t even there. Plenty of torque and you’re not limited on range like with an EV." Jim also owns a second-generation Toyota RAV4 EV, with which he has towed.

Hybrids like Toyota’s AWD Sienna, AWD Venza, and AWD Highlander as well as the AWD Lexus RX and Lexus NC also work great for towing by comparison to BEVs. They have no meaningful range limitations, are easy to refuel on the road with a trailer connected, and they all are available with spare tires.

Those looking for a green crossover utility vehicle who might tow, particularly in winter, should give careful thought to the type of vehicle they choose. As we have demonstrated, battery-electric vehicles have three major flaws when it comes to real-world towing.

Mark Day wrote on January 14, 2021 - 11:55pm Permalink
Two items: My 2012 RAV4 tows up to 3,500lbs, and I wouldn't trust a CVT automatic for towing. Overall, seems like regression to me.
TinesyPeat wrote on May 9, 2021 - 11:53pm Permalink
Can you tell me please.
Tuaca Tom wrote on May 19, 2021 - 12:27am Permalink
Would love to see updated video with a realistic speed on pulling a trailer, for safety reasons in reality on open road in western states (cross wind)
Tuaca Tom wrote on May 19, 2021 - 12:35am Permalink
Terrific video, love the math. Very telling.
Paul T wrote on September 21, 2021 - 12:22am Permalink
Completely pointless article comparing to a RAV4 Prime, which is practically impossible to buy even if you want one.
John Goreham wrote on September 21, 2021 - 7:45am Permalink
On the day of your comment, Boch Toyota in Dedham Mass. has 4 RAV4 Primes in stock unsold for immediate delivery. This dealer has consistently had RAV4 Primes all year long. Today they have 3 SE trims and 1 XSE. You could buy one now and have it shipped to arrive at your home by next week. What is the lead time on a new Tesla Model Y order? When I click on the Tesla site, then "Model Y" then "Order" in the Tesla site it says "March."