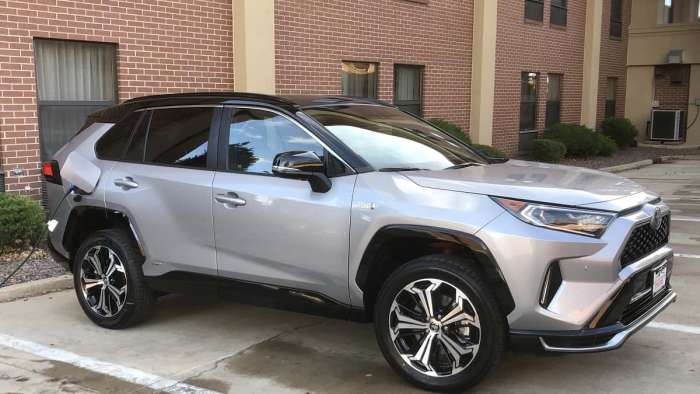 Different shoppers have different priorities. Here is why one green crossover shopper purchased a plug-in hybrid Toyota RAV4 Prime crossover, and why she opted to pass on the battery-electric Model Y from Tesla and the CR-V Hybrid From Honda.
Advertisement

This may come as a shock to some battery-electric vehicle (BEV) automotive enthusiasts, but not every green vehicle shopper places a Tesla at the top of their shopping list. Torque News recently conducted a very detailed interview with one green crossover vehicle owner and explored her shopping priorities and vehicle history with her.

Kate S. is a long-time crossover driver. Her first car was a used BMW, but that brand didn’t even make her list of considerations when she shopped new. Before her recent Toyota RAV4 Hybrid and RAV4 Prime purchases (which we will explain), she owned two vehicles. One was a well-worn and much loved ‘98 Honda CR-V. Kate owned this crossover for 20 years! She also owned a modified for off-road Toyota 4Runner she calls “no less than badass” which she used as her utility and towing vehicle.

Kate knew for a while that it was time for her to purchase a new vehicle, so she opted to move on from both her CR-V and 4Runner and get one new vehicle to serve all of her needs. Kate explained why she opted to move to a green vehicle. She told us, “The maintenance on the CR-V started costing me more than it was worth on a yearly basis. That's when I knew it was time to start thinking seriously about a replacement. I knew my next car would have to be something that was more future proof. In other words, a pure ICE (internal combustion engine) car was not an option.”

What finally prompted her to finally pull the trigger? A car show. Kate says, “I saw the unveiling of the Toyota RAV4 Prime plug-in hybrid-electric vehicle (PHEV) at the LA Auto Show. I knew this was the car for me. When I saw "94 MPGe" at the LA Auto Show's Prime unveiling, I was sold!” That was November of 2019.

Why Did a 20-Year Honda CR-V Owner Buy a RAV4?
As a long-time CR-V owner, we asked Kate why the new CR-V Hybrid didn’t earn a spot in her driveway. Kate tells us she was interested in a green version of a crossover, and that she began to look at the available options. Kate says, “I adored my Honda. But I saw that the combined MPG of the CR-V Hybrid was 38 compared to Toyota RAV4 Hybrid's 40 MPG. I was admittedly a little disappointed. As it turned out, the Honda CR-V hybrid is incapable of towing, which was the deal-breaker. I needed a 2 in 1 car.”

Related Story: 2020 Honda CR-V Hybrid AWD Adds Mileage, But What Do Buyers Have to Give Up?

Kate’s Plan For a RAV4 Prime Hits a Snag
Kate told us that she wanted to buy a RAV4 Prime plug-in hybrid-electric vehicle right away. However, it wasn’t released yet for sale. And when it was on sale, like all popular new green vehicles, it would be in limited supply until production ramped up fully. Kate told us, “It was obvious this car was going to have trouble with volume, so at the end of February of 2020, I started calling as many dealerships as I could to put my name on their RAV4 Prime lists. It was later discovered that the US would only receive 5,000 units for the 2021 model year and that's when I had to make a decision.” 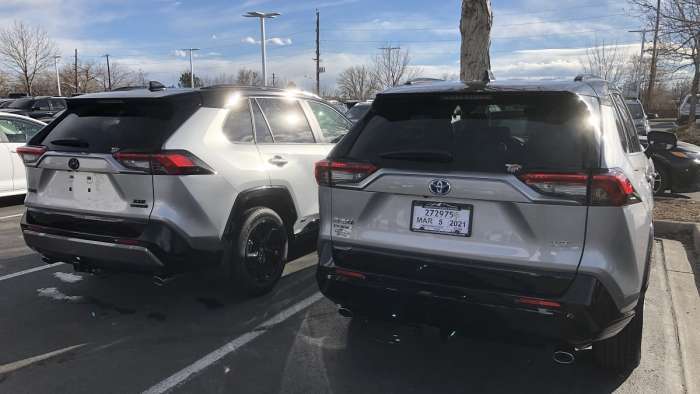 Not knowing how long she’d have to wait for a Prime, Kate ended up buying a RAV4 Hybrid to hold her over until the RAV4 Prime was more readily available and perhaps lower in cost. She didn’t own the Hybrid very long before swapping it for a Prime. “The RAV4 XSE Hybrid was such an amazing car there were many times I wondered if I should just call it good and not get a Prime, I adored that car! Coming from two very old cars to this freakishly technologically advanced car was quite the eye-opener. But in the end, especially after reading the reviews from those who already had a Prime on the "Official RAV4 Prime" Facebook geek group, I kept to the original plan to stay the course and get a Prime whenever that day should come.” Kate found an available Prime, traded in her RAV4 Hybrid, and now owns a RAV4 Prime XSE Premium.

Why Not a Tesla Model Y?
One thing that is obvious when you communicate with RAV4 Prime owners in online forums is that most have had a prior green vehicle or own a second green vehicle. In fact, quite a few Toyota RAV4 Prime owners also own a Tesla. We asked Kate if she considered the new Tesla Model Y, which launched in early Q2 of this past year, right around the time she bought the RAV4 Hybrid. Kate told us, “I actually did consider the Model Y but no other cars except that and the Toyota RAV4 Hybrid/Prime and Honda CR-V Hybrid. It was a hard choice as the Model Y seemed like it could have satisfied many of my vehicular needs. In the end, the reliability and reputation of the Japanese made green cars won me over. A bit of brand loyalty in a way perhaps?”

Will Kate Trade-In The RAV4 Prime For a BEV?
Within her posts at the Official Facebook RAV4 Prime Group, Kate calls her new RAV4 Prime her “forever car.” We asked her to explain why she calls it that. She told us, “Many people humanize their pets, I tend to do that with machines. I find no reason to replace a machine unless it is truly time to replace it. My Honda was mine till its time was up. The future is hard to predict but I plan on keeping the Prime till its time is up. Most pet lovers keep their Fefee till Fefee dies, I just do the same with my vehicle is all.”

Given that Kate owned her old CR-V for two decades, it would seem that she gave both Honda and Tesla a fair look, but won’t be buying a vehicle from either brand any time soon. We thought that some shoppers of all of these green vehicle models might appreciate hearing from an actual owner of a RAV4 Prime, RAV4 Hybrid, CR-V, and 4Runner and why she now calls her RAV4 Prime her “forever car.”

If you’d like to hear more about why green vehicle shoppers are buying the Toyota RAV4 Prime, RAV4 Hybrid, Tesla Model Y, or Honda CR-V Hybrid we suggest joining some Facebook groups that feature these models. Unfiltered posts from actual owners are an excellent way to get a picture of the true ownership experience, and you can ask questions directly of owners who will often answer in real-time.

Watch for more stories featuring Kate’s insight in the days to come at Torque News.

DeanMcManis wrote on January 13, 2021 - 7:45pm Permalink
Many people are afraid of battery electric vehicles because it is a big unknown. Hopefully her experience of owning a plug in hybrid will encourage her to get a BEV in the future. The good reliability of the PHEVs that I owned made me want to move to BEVs in the future. I also had a CR-V for years, and along with many other great Hondas that I've owned, it was a great, economical and reliable vehicle. It is a shame that Honda is not committing to BEVs. They do not even have a plug-in vehicle other than the low volume, special order Clarity PHEV. With 95% of new vehicle sales still going to gas-only vehicles, it is no surprise to see people unsure of an electric car today. I think that it's great that Toyota offers their RAV4 Hybrid and RAV4 Prime models to give people the option of a worthy transition vehicle, moving from solely gas, and experiencing the benefits of an electric motor.
John Goreham wrote on January 14, 2021 - 10:53am Permalink
Well said! I did see a PHEV CR-V has been created by Honda for other markets and I hope it will soon be in the US as well. We at the CR-V Hybrid Facebook club have changed the title to include the PHEV in anticipation of that.