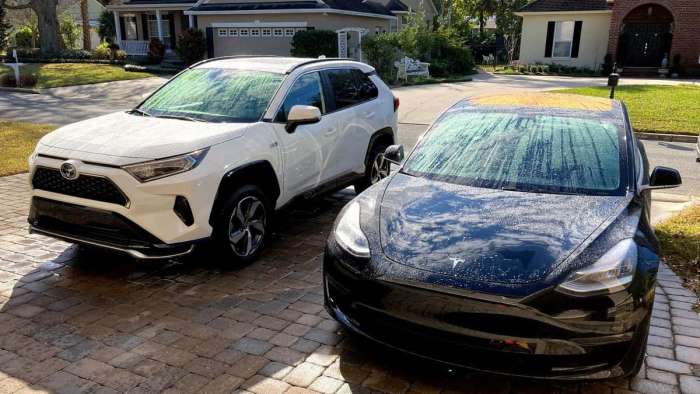 The reasons are pretty consistent. Here’s what owners of both Tesla EVs and Toyota RAV4 Primes say.
Advertisement

Many EVangelists have nothing good to say about plug-in hybrid-electric vehicles (PHEVs) like the new Toyota RAV4 Prime AWD crossover. For these purists, a PHEV seems like some kind of a trick or compliance vehicle aimed at avoiding or delaying the “inevitable” switch to battery-electric vehicles. For other green vehicle owners, a PHEV like the RAV4 Prime is the perfect vehicle to meet their requirements.

The RAV4 Prime is a hot vehicle right now. Toyota cannot keep pace with consumer demand, and dealers are happily selling any RAV4 Prime they are lucky enough to get immediately upon its delivery to the lot. Some dealers are even charging above MSRP and finding willing buyers. We have been tracking RAV4 Prime owners’ progress from fan, to shopper, to new owner, to veteran owner on various forums and Facebook groups. What quickly became apparent was that many of the new RAV4 Prime owners are also current or former Tesla owners. We asked them if they would explain why a Tesla owner buys a plug-in hybrid Toyota.

Top Reason Tesla Owners Buy a Toyota RAV4 Prime– Unlimited Range
While PHEVs only have a limited all-electric range, 42 miles in the case of the RAV4 Prime, they have unlimited mileage in the sense that they carry enough liquid fuel to go 600 miles or more before stopping for energy. And when they do stop, they can either grab electrons if time and charging ports permit, or they can stop for a few moments on any corner and add back another 500 miles or more in energy. The hassles and limited range associated with Tesla BEVs are a big reason many of these green vehicle owners say they opted for the RAV4 Prime. Here are their own words:
- We still have our Model 3 and prefer it on trips. But it is only fair as a tow vehicle as the range stinks, and charging is a pain when towing. And to boot, most National Parks have no electric. So when we are towing, the RAV4 Prime is a clear winner. D.H.
- The Prime would be for my wife and family long road trips. It may be a long time before EV’s are practical for long family road trips during busy holiday seasons. B.C.
- While BEVs have made great progress in the last ten years, they are still not there yet when it comes to long-distance travel or at parity with ICE vehicles when it comes to range, charging infrastructure, or just plain old convenience. BEVs are our 95% car, but when it comes to long-distance travel, nothing beats an ICE. A PHEV like the Prime is a great compromise for that part of our travel. G.L.
- Traded the Model 3 because I wanted one vehicle that could go on longer road trips without stopping every 2 hrs. C.W.
- Have had a Tesla Model S for two years now, and I love it. Not a perfect car, but it’s nice not to have to pay for gas and associated maintenance. Plus, it’s dead sexy. That said, we like having a RAV4 Prime for longer trips. J.J.

Second Reason Tesla Owners Buy a Toyota RAV4 Prime - Towing
While not a vehicle that aimed at towing, the RAV4 Prime is used by many owners for towing. It’s rated at 2,500 pounds. Many owners use the tow hitch for other purposes, most commonly to hold a multi-bike rack. In addition to D.H. above, who lists towing as a second reason to own both a Tesla and also a RAV4 Prime, C.W added, “Backcountry camping with tow capability was an extra plus. I do 99% of in-town miles in EV. Nice to do everything with one car.”

Some Tesla Owners Are Waiting For a More Perfect BEV and Own a RAV4 Prime Now
Ask many Tesla and RAV4 Prime owners why they bought a PHEV this year, and they will tell you that for them, there is no perfect BEV yet. One such owner of both technologies is James Klafehn. Mr. Klafehn is a former owner of both a Tesla Model X and a rare 2014 RAV4 EV. His experiences with the Model X were so negative he created a Youtube series on the topic. Quality problems, difficulty modifying and servicing the Tesla, lousy towing range, and a long list of other reasons pushed him from the brand and back into the arms of Toyota. Mr. Klafehn is now the founder and administrator of a popular RAV4 Prime club. So you’d expect that he has no plans to ever return to Tesla. But that’s not the case. Mr. Klafehn thinks that Tesla needs about five more years to sort out its quality SNAFUs, and he says, “I’ll buy the Cybertruck next as long as Tesla improves their quality and service.”

One owner, K.V., posted this overview of why he owns both a RAV4 Prime and why he opted not to purchase a second Tesla: “We have Model 3 AWD + RAV4 Prime in our household. Originally the RAV4 prime was supposed to be a Model Y, But I had bad customer service experiences with Tesla sc (more than one occasion) and felt it was too risky to be locked in with Tesla for 2 cars. I love the TNGA,TQM, PHEV combo from Toyota. Especially the reliability part. Was equally impressed with Tesla tech, FSD and full EV blast of a performance. So, Rav Prime is the workhorse/ road-trip car.”

H.D. is currently shopping for a RAV4 Prime. He has both a Toyota and a Tesla and gives this reason for not driving the Tesla this past week: “I have free supercharging, and I still left the Tesla at home for this holiday to get family out of the city. Where I am staying, there is no supercharger within 40 miles from our vacation spot. Nor is there a plug I can get to overnight. So I am supposed to plan an 80-mile trip to recharge my car during the week with family?”

S.B. explained how the RAV4 Prime fits into her household by posting this: “My husband drives a model 3 and I have a RAV4 Prime. The combination of these two vehicles is perfect for us. We wanted a larger, more rugged family vehicle that we could road trip in. The Model 3 is perfect for him for a commuter/ smaller road trip vehicle.”

The Toyota RAV4 Prime is a unique vehicle in the market today. It has a projected maintenance and repair cost that rivals the Tesla Model Y. It’s cost for energy is is comparable, and the RAV4 line is a perennial IIHS Top Safety Pick. Unlike Tesla’s models, it is not as sexy, but has a long legacy of being among the most reliable vehicles one can buy. For this vehicle tester, the unstated reason why so many RAV4 Prime buyers are also Tesla owners is that the RAV4 Prime is an electric vehicle. It always has the electric starting torque that makes EVs so much fun to drive. It always regenerates power when braking. And in a typical commute, it only uses electrons. Unlike battery-only purists, some Tesla owners are perfectly happy to take a long trip in a roomy five-passenger all-wheel drive SUV that gets 94 MPGe.