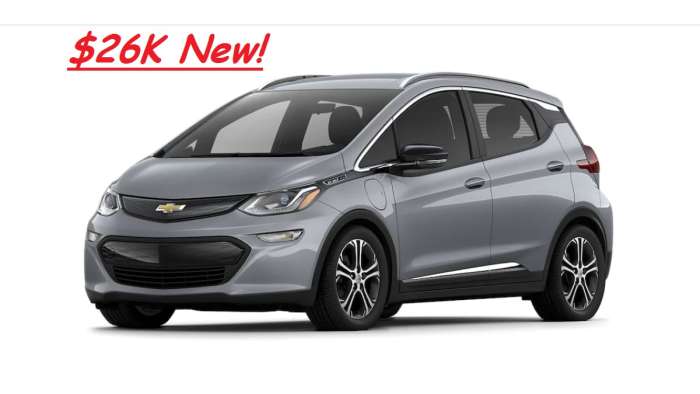 2021 Chevy Bolt Premier Is The Best BEV Value In America, But Only At This Price

The five-year-old design of the Chevrolet Bolt is aging extremely well. We find it is a screaming value. Not at MSPR, but at the heavily-discounted prices real buyers can pay.
Advertisement

Chevrolet’s marking description for the 2021 Bolt battery-electric vehicle (BEV) is “Affordable Electric Car.” That statement is both true and also false. At its sticker price, the Bolt is among the worst vehicle deals in America. However, after the steep discounts Chevy and its dealers are offering, it is hands-down the best BEV value one can buy today. Maybe the best value period under $26K. 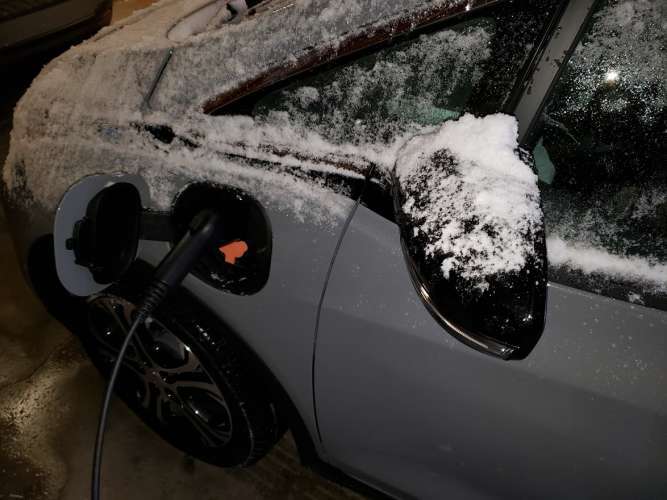 Why We Love The Bolt
We are testing a new Chevy Bolt today and there are many things we love about the Bolt. We love 2021 Chevy Bolt for its real-world range of around 200 miles in winter. This usable range is on par with the customer cost of a new Mustang Mach-E or a new Standard Range Tesla Model Y.

The Bolt is also a blast to drive in suburban, urban, and even highway settings. We’ve tested the Bolt many times since its launch in 2016, and today, in 2021, the Bolt is still a great compact hatchback car. Its abundant torque can spin its tires in dry cold weather when underway. The Chevy Bolt feels zippy, not too tippy, and we love the ride.

The Chevy Bolt also feels “biggish” inside when you are the driver or a front seat passenger. There is room for a college move-in if you drop the back seats, and the rear seats work fine for two kids. The Bolt is a well-laid out vehicle in all regards.

With small cars, safety scores take on added importance. The last Bolt tested by IIHS was a Top Safety Pick, a score that even Tesla’s Model S has never achieved.

We also think the Bolt Premier’s infotainment system is one of the best on the market at its discounted price point. Its driver information display is perfect. It gives you what you need, is easy to adjust, and it keeps your eyes forward. No looking down and to the right like in a Model 3. Would we like a full-color head-up display like the one in the RAV4 Prime? Sure, but do we want to pay for it? Nope.

The center display is also perfect. Large, clear, and Android Auto and Apple CarPlay work perfectly. Do we wish it was a wireless system? Sure, but do we want to pay for it? Nope. Add in fantastic headlights and high beams and the content of the Bolt is competitive with anything in the sub-30K category. But the Bolt’s MSRP is over $44K! So let’s talk about price in some detail.

Chevy Bolt Real-World Pricing and Discounts
The Bolt Premier offers two pricey options packages, The Infotainment Package and the Driver Confidence II Package. Click those boxes and throw in a fun color, and the Bolt Premier has a sticker price including destination fees of $44,180. That price is well into the range of the SR Tesla Model Y and base Mustang Mach-E (after its federal tax incentive). Suffice it to say, we don’t see the Bolt Premier at $44K as a “good value.” In fact, that price is what one might call laughable given today’s other BEV options.

However, Chevy isn’t actually charging people $44K to drive home in new Bolt Premiers. The discounting is absolutely crazy. For example, we configured a Bolt Premier on Chevy’s configurator a few times, and “Total Cash Allowances” of $5K or more were popping up. This is while you are home in your PJs just flirting with the idea of buying a Bolt. The actual discounts at dealers in my area are literally triple what GM is offering. 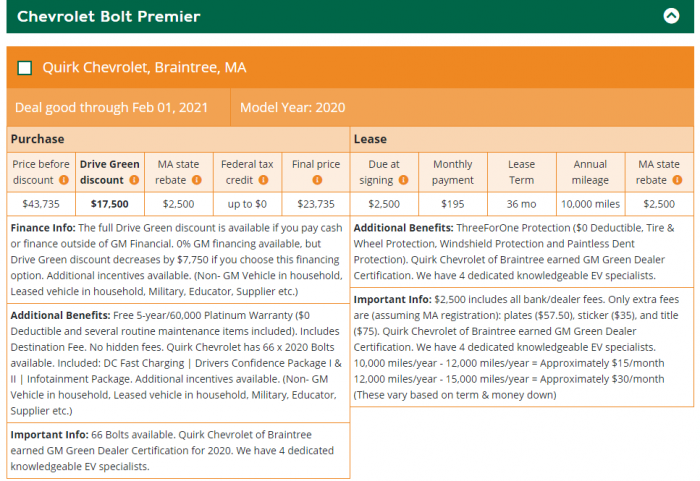 The best deal on a new Bolt Premier we found with about 1 minute of looking was at Quirk Chevrolet. The customer cost was just $23,735! In New England, searching for new EV deals is easy on the Green Energy Consumers Alliance Drive Green webpage. The discount was an astounding $20,000 including the state rebate. Pull out the rebate, and the discount is still a whopping $17,500. That is a breathtaking amount of discounting for a vehicle of any type. Three other dealers in the Boston Metro area have Bolt Premiers with a customer cost around $26K. This is before you even negotiate.

At $26K, the Bolt Premier is the best battery-electric vehicle deal in America. Maybe the best deal on any BEV ever offered anyplace on Earth. We can’t overstate how much car this is for $26K. Factor in the savings on energy and maintenance you can expect from a BEV, and the Bolt simply crushes the total cost of ownership models for cars like the ICE-powered Corolla, Civic, and Elantra.

The 2021 Bolt Premier still feels new, modern, and cool when we drive it. “Cool” in perspective. What other car its size and with its capabilities is cooler at this cost point? We can’t name a single one. 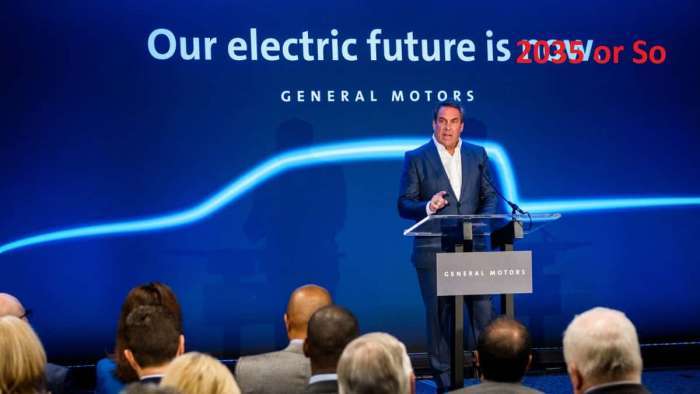 Chevy’s “all-electric future is now” campaign started over a year ago. So far, it has been press releases, teaser images, promises of things to come, and zero new battery-electric vehicles for American market shoppers. However, if you want an “affordable” battery-electric vehicle right now, the Chevy Bolt is hands-down the best value. If your price point for a new BEV is under $26K why are you still reading? Go buy one!

DeanMcManis wrote on February 1, 2021 - 6:32pm Permalink
With the discounts the new Bolt is a fantastic deal! Especially when you figure in the lower operating costs of an EV.
Timothy Parker wrote on February 1, 2021 - 8:12pm Permalink
Totally agree. I love my Bolt. When I see Teslas around town, I feel sorry for them.
Philip wrote on February 9, 2021 - 3:28pm Permalink
I own 2 Chevy bolts 2019 premieres and I love them both of my bought used at the time I got them out of killer deal but at $26,000 for a new one that would be great but here in Las Vegas we don't get discounts by the state so it kind of sucks but I didn't have to pay tax on one of them because I bought it used yeah the one we bought from a dealer so we had to pay tax but my wife got it with me three thousand miles on it for $24,000 I bought my over a year ago when they were going for a minimum of $34,000 and I only paid $28,000 but I had to drive to Santa Barbara California to pick it up from the gentleman that owned it. It's the best car I've ever owned and I'll never go back to a ice car again.
jay wrote on March 2, 2021 - 1:28pm Permalink
for an O-T-D tax/Title. price of 31.1K (2/2021) Premier all options.. it a great bee-bop around town car, and usually can find free charge stations!... not giving up my 2015 Q5 TDI for the long haul trips! 40mpgs.
Luis wrote on May 30, 2021 - 7:54am Permalink
I bought one bolt two days ago for my wife the incentives were too good to ignore, I am a very bad negotiator and I was not completely prepared to make the purchase when I arrived at the Dealer, I simply went to see if they had it available, I could only get a 12K on insentive and rebates and 2K from the dealer, what made up for this part of the deal was they quoted $5000 more than carmax offer me just 3 month ago for the purchase of old car I so we close the deal after everything was said and done I ended up arround US$25,700 for the Bolt it was not the greatest deal nor the worst either.

Tesla-Funded Research Reveals One of The Biggest Mysteries of EV Battery
Tesla Tesla Buyer Nets a Whopping $12,000 Discount After Asking for Reduction
END_OF_DOCUMENT_TOKEN_TO_BE_REPLACED