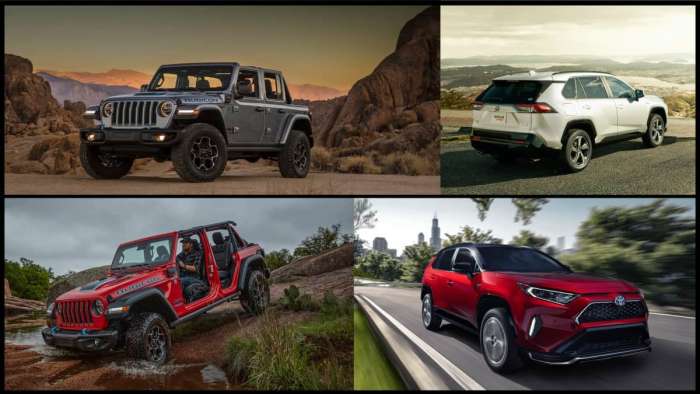 Toyota RAV4 Prime And Jeep Wrangler 4xe Are Both Off-Road Capable Hybrids! How To Choose?

Toyota has been stunning us with hybrid technology for quite some time, but the RAV4 Prime is a truly spectacular piece of machinery. It is the second fastest vehicle on Toyota’s line-up, and it can get 600 miles on a single tank. Jeep’s Wrangler 4xe is not nearly as economical, but it has its uses.
Advertisement

I’ve been very vocal about how much I love the Jeep Wrangler 4xe. It’s great to see electric technology coming to one of the most iconic off-roading platforms in history, and the way that FCA designed the 4xe makes it quite useful for everyday activities while still providing the utility and accessibility that Jeep is famed for. The Plug-in Wrangler’s base ground clearance is 10.1 inches, and the Rubicon package gives nearly 3/4ths of an inch more height. The Wrangler is unlikely to find itself bottomed out on a speedbump or hill, unlike some shorter vehicles. The Toyota RAV4 Prime barely falls into the shorter vehicle category with its own 8.3 inch clearance, the same as the Volkswagen ID.4. The Mustang Mach E's ground clearance is Lilliputian in comparison at only 5.7 inches, a measly half inch taller than my stock Dodge Challenger R/T. If Porsche's electrified version of the Macan keeps the same clearance, it will wind up just a hair shorter than the RAV4, at only 7.8 inches.

Toyota’s off-roading technology has delivered consistent performance from many different platforms. The Hilux is noted as being nearly indestructible and the Land Cruiser has found itself in everything from rap videos to official military service. With such a pedigree, the RAV4 Prime is also gifted with technological enhancements to make tackling anything the road or trail can throw at you easier, like all-wheel-drive, though it does not have any specific off-roading focus in its selectable modes. The interior of both vehicles are comfy and of course the Jeep uses the UConnect infotainment system that we know and love.

Like the Wrangler 4xe, the RAV4 Prime can charge itself while driving on its gas motor, or it can fill up using a plug or level 2 charger. Neither of the two is capable of DC fast-charging or using Tesla's Superchargers at this time, though future models may see battery changes. The Toyota is much more economical than the Wrangler 4xe but is also nearly 1000 pounds lighter and features a much more aerodynamic design. What the Jeep lacks in efficiency, it makes up for in utility. The RAV4 Prime’s towing capacity is 2500 pounds, lower than the 3500 of the beefiest gas RAV4s. The Wrangler 4xe matches the 3500-pound tow of the gas RAV4 and its own ICE-only brother. 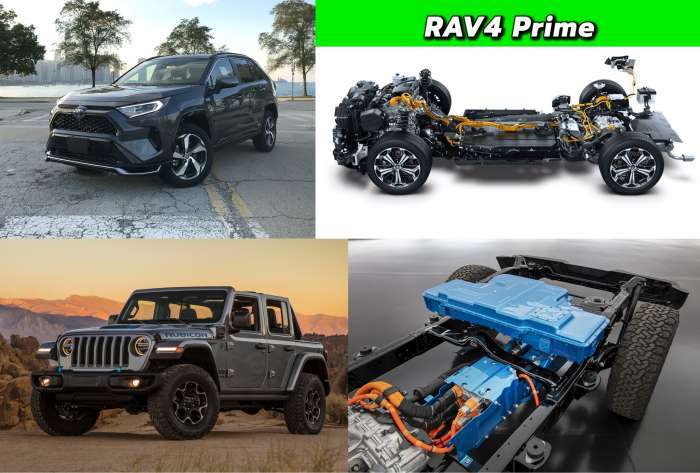 The batteries for the RAV4 Prime are slung along the underside of the vehicle, the typical placement in most electric vehicles. This allows for a lower center of gravity. The disadvantage is that if there is some sharp point that collides with the underside of your vehicle with enough force, your battery pack could become punctured, though it is unlikely. The Wrangler 4xe’s battery placement is further up, under the rear passenger seats. Because the battery is higher and protected by mechanical components, the already unlikely chance of puncture or damage is further reduced.

Despite only having about 2 inches difference in height, the Wrangler 4xe brings a lot more to the table in terms of off-roading than the smaller, lighter RAV4. They both apply power to all four tires, but the Jeep has 4Lo, a gear ratio used for rock-crawling. This really allows the electric motor to put its torque to full advantage and can the Jeep get out of some really sticky situations that other SUVs simply can’t handle. The Tesla Model Y is notorious for having an Off-Road Assist mode that seems mostly to be useful for crossing grassy fields thanks to its low clearance, but with an aftermarket suspension modification that gives it some lift, we’ve seen a Model Y tear up the Moab desert just like the taller Wrangler or RAV4 would.

In all honesty I would suggest the Toyota RAV4 Prime to the average motorist. It’s got better efficiency and its all-electric range is enough that many suburban drivers won’t even need to use gas in the first place. The plug-in version of the RAV4 is less expensive than the Wrangler 4xe in any trim, and that’s despite being $10,000 more expensive than the normal hybrid version of the RAV4. The Toyota is a more reasonable vehicle. I wouldn’t say that it’s more refined or restrained, it’s simply smaller and more economical, something that most people are looking for.

If you’re planning on taking a trailer with you when you go out to the Moab, you may prefer the Wrangler 4xe. If you’re taller, the 4xe grants a little more leg room for the driver as well. At my height, the RAV4 simply isn’t an option; despite “41 inches of leg room” in the front, my 34 inch inseam could not find a comfortable way to fit. The Jeep is “Trail-Rated” and is much more a purpose built off-roader than the RAV4 Prime. Jeep's offering is preferential to folks that are focused on off-roading, a larger towing capacity, or folks who don't fit in the smaller Toyota. It ticks off all the right boxes for me.