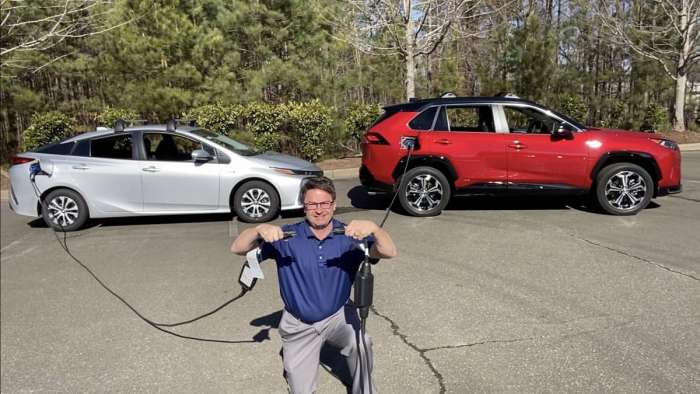 Compare specs and stats for 2021 RAV4 Prime and 2021 Prius Prime. You choose your winner.
Advertisement

Toyota has thrown out a lofty goal that might shock some people. The world’s leading automaker plans to manufacture 40% of its inventory with some form of electrification by the year 2025. This increases to an astounding 70% of all sales by 2030.

An electrified vehicle could take many forms. It can be a Toyota hybrid, a plug-in hybrid electric vehicle (PHEV), a battery electric vehicle (BEV), hydrogen fuel-cell, or something else that has not even been announced yet. 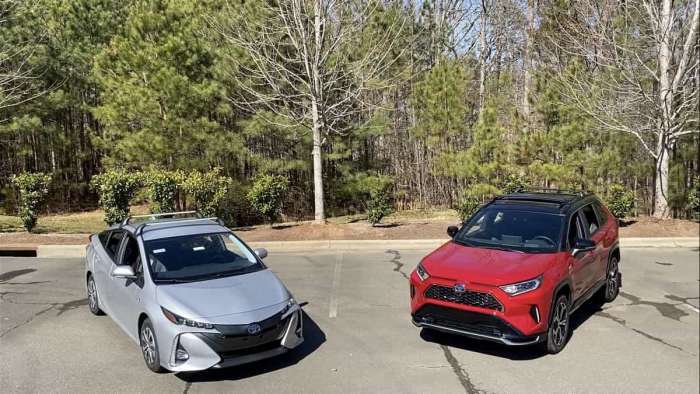 RAV4 is the top selling small SUV in America and has been for the last four years. Much of this is a result of an amazing RAV4 Hybrid popularity. Now, RAV4 Prime has jumped on to the scene.

Prius is the best-selling hybrid of all time. It is known for great fuel efficiency and its cool futuristic appearance. Prius Prime takes Prius to another level, as “they” might say.

A Toyota plug-in hybrid electric vehicle allows drivers to utilize a hybrid power plant (gasoline and electric motor synergy) as well as being able to plug it in and charge it. This gives owners many miles of all-electric use – no gasoline.

A comparison of engines and performance specs shows a clear distinction between Prius Prime and RAV4 Prime. 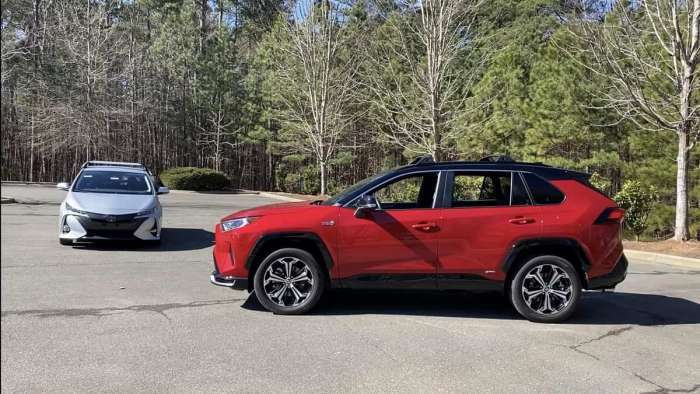 The 2021 RAV4 Prime produces 302 horsepower with its 2.5-liter 4-cylinder engine and electric motors. It is already the most powerful and fastest RAV4 ever made. 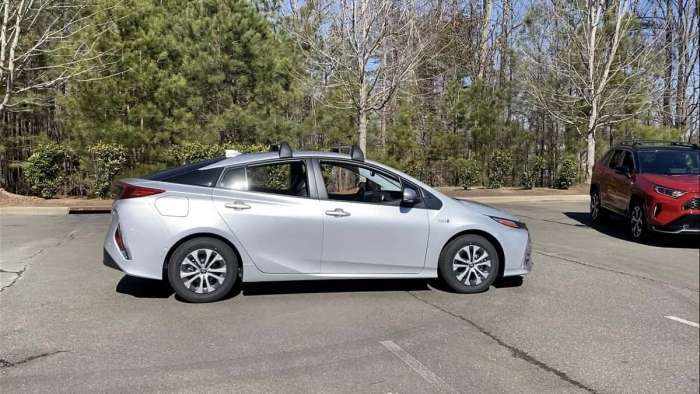 Toyota Prius Prime offers less power, but it fits its body very well, so to speak. Look for 121 total hybrid horsepower. This comes from a 1.8-liter 4-cylinder engine and electric motor power.

There are two different ways to figure mpg ratings with Toyota plug-in hybrids. You can look at MPG or MPGe.

MPG is traditional fuel economy and looks at driving with gasoline only – but in HV or hybrid vehicle mode with electric motor assist. 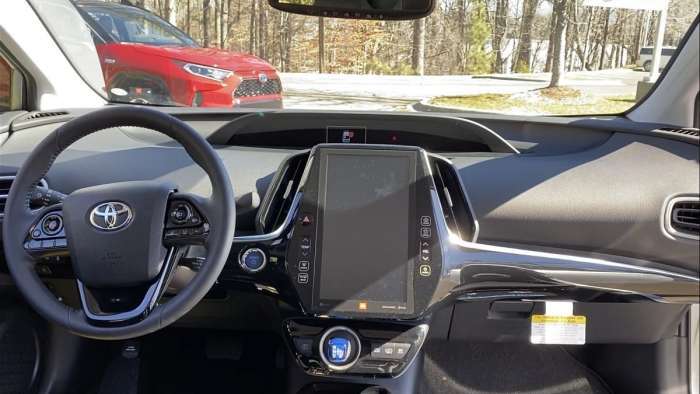 MPGe combines hybrid driving with electricity – with what you get in electric range by plugging it in. 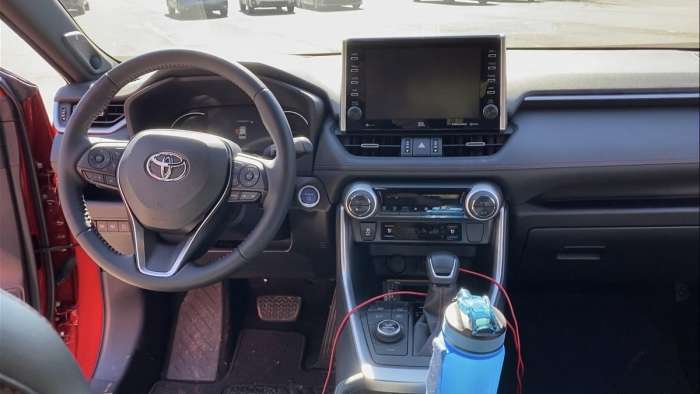 The clear benefit of owning a plug-in hybrid is the no-gasoline effect from driving in all-electric mode. The more you plug your vehicle into your home or work outlets, the more amazed you will be with your fuel efficiency.

This would make either of these vehicles ideal for drivers with a reasonable work commute or parents who carpool their kids daily.

Prius Prime is able to charge faster than RAV4 Prime.

Depending on whether you use a 120V or 240V external charging source, Prius Prime takes around 5 hours and 30 minutes or 2 hours and 10 minutes to fully charge. 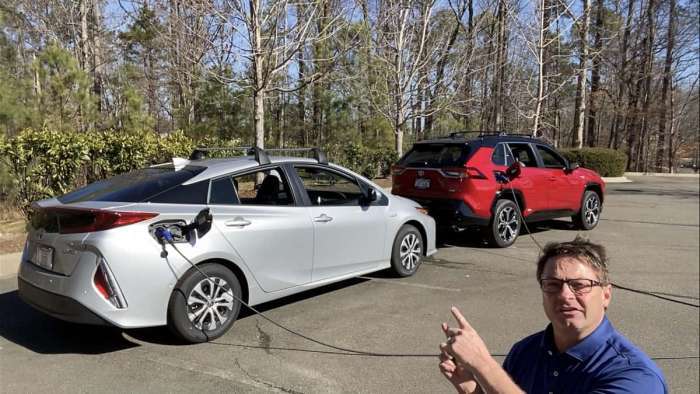 When fully charged, a Toyota RAV4 Prime can travel up to 42 miles in all-electric (EV) mode. In comparison, Prius Prime can go up to 25 miles without using gasoline.

Many factors determine just how far they can make it in EV mode. Weather conditions, driving style, temperature and terrain can all have an impact on your driving range.

I made a comparison video looking at 2021 RAV4 Prime XSE with Premium Package versus 2021 Prius Prime Limited.

These are the highest levels for each vehicle and make for an interesting plug-in battle. If you have found my “Toyotajeff” YouTube channel already, you may know that I love pitting vehicles against each other in battles.

Hopefully, these comparisons help potential buyers research vehicles and trim levels to see what is the best fit for them and their families.

I hope you find my video helpful and entertaining.

Toyota RAV4 vs Prius. Two totally different types and classes of vehicles. Yet, when you break it down, it makes sense to compare them against each other. 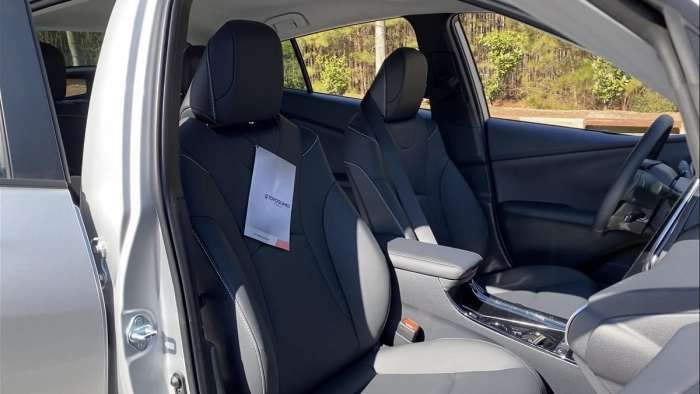 Pricing may make a big impression on you, as there is a clear difference. 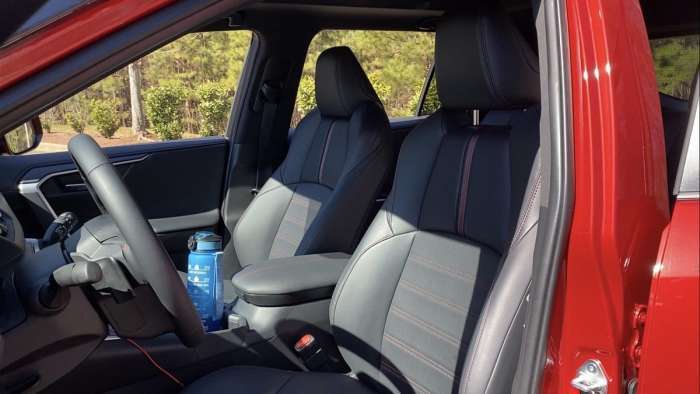 Toyota RAV4 Prime comes in SE and XSE grades. XSE has an optional Premium Package that adds in many additional features and in cost too. 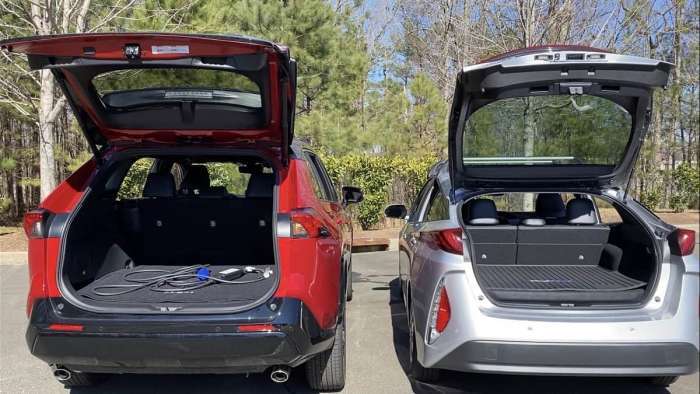 Have you purchased either of these? If so, feel free to share your impressions and experiences with us.

Are you more a fan of Toyota RAV4, RAV4 Hybrid or RAV4 Prime? What about Toyota Prius vs Prius Prime?

Also, are you on a waiting list for either Prius Prime or RAV4 Prime? How is that going so far?

Are you a fan of the Toyota initiative to produce more EV, BEV, PHEV and other alternative fuel vehicles?

Thanks for reading everyone. See you next story when I explore possible 2022 Toyota TRD Pro color choices.

Vince Caruso wrote on February 26, 2021 - 8:25am Permalink
With either car you can own one less car, it is a zero emissions in town and super mpg on trips. That is a big deal till all electrics can do more miles per charge. Some drive the Prius Prime all year on one or two tanks of gas. Great cars.
Dr. Emilio Lizardo wrote on February 26, 2021 - 9:43am Permalink
I have the 2017 Prius Prime Advance. It regularly get's 33 miles on the battery in the summer and 26 to 27 this winter in Washington, DC. I fill up (8 gallons) about twice a year in regular daily driving. 25,000 miles in three years with no maintenance issues. BTW, you can have the dealer change the rear beeping to one beep.
D Hey wrote on April 17, 2021 - 6:45pm Permalink
I have had a Prius since the first one I waited for in 2004. My most recent Prius (2018) I decided to try the Prime version. Of the four Prius models I have owned, I like this one the best! Since we are retired we only make short errand trips and occasionally go out of town, but my cumulative average mpg has been 109. For the first time in my life I am concerned about the gas getting “old” in the tank! With mileage like this it doesn’t bother me to plug it in each night when finished using it for the day.

LG's New EV Battery Plant Is a Welcome News for Tesla
Tesla Giga Berlin's New Hurdle: It's Not Only the Gov't, but Now Tesla Itself
END_OF_DOCUMENT_TOKEN_TO_BE_REPLACED