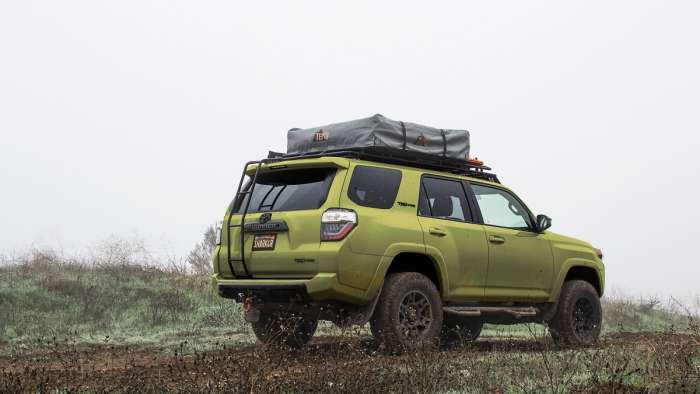 Are We Looking at New Toyota 2022 TRD Pro Color? Fans Speak Out on Wild Possibility for 4Runner

The internet is abuzz over this potential 2022 4Runner TRD Pro color. Tundra could see this too.
Advertisement

Well, it is that time of year for fans of Toyota 4Runner. And for Tundra and Tacoma and Sequoia enthusiasts too.

The new 2022 TRD Pro color will be announced in just a few short months. Last year, Lunar Rock was announced in late June. We are not all that far away.

This shade, Lunar Rock, is so popular with potential buyers that many people are still on long wait lists to get one. If you thought a 2020 Army Green was challenging to get, imagine waiting for a 2021 Lunar Rock Toyota Tundra or Tacoma or Sequoia or 4Runner.

Time to look forward to what is coming for 2022.

Several Toyota forums have been circulating rumors of the potential new 2022 TRD Pro color choice. I found this speculation intriguing enough that I thought I would write about it and ask you for your thoughts. 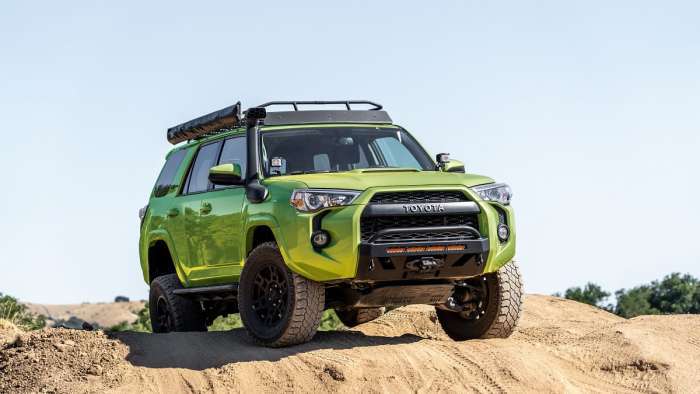 A citrus lime color. Something like Electric Lime Metallic from the Prius C days. This is gaining momentum as a possible final choice.

Big thanks to Instagram user @4runnersnacks for mocking up this color, along with some other possible shades that would look absolutely wild on Tundra and 4Runner and Tacoma. Please follow his page to see them all.

Another popular Instagram user, my friend trd.jon, opened up discussion on his page about this “limey” 4Runner TRD Pro. I found these opinions fascinating.

Luis_n_luis_gabriel observed, “That would be breaking with tradition. Not a bad color.”

gziladesigns commented. “I’ve heard it from multiple people, but we shall see soon enough!”

“I had that IM... loooooove the color.” Said rocksi80. Could Spring Green Metallic make a comeback in Tundra TRD Pro and 4Runner too? 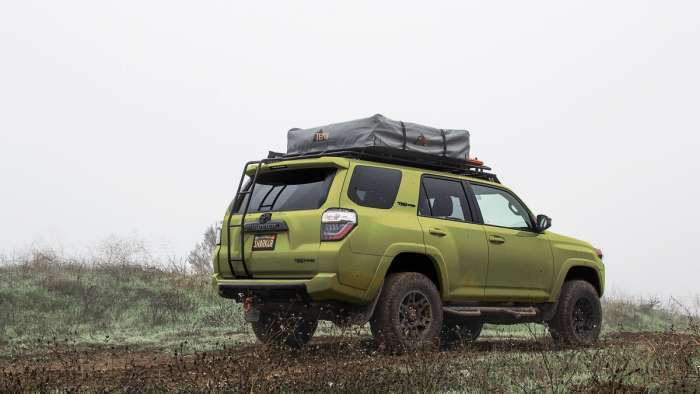 “Kinda dig the green. Would look good out in the mountains.” Mentioned ginger4runner.

i_am_mr_sweetland offered up other alternatives. “I don’t know about that one. I would like to see maybe the brick or a nice darker brown.”

“Def looks better than I thought it would.” Stated yotawife.

midwest4r said. “Hmmm... yeah idk about this color. I saw a really nice maroon FJ yesterday and it would look so so good.” I am on board with a black cherry color too. More on that below.

“This is gonna be one that only the soccer moms drive, I think. Stated smitty_1320.

vomotorsports_tr4h is thinking of something far, far away. “My son said he would get the license plate Toyoda. It'll look great with that color.” The real question is – are we talking Yoda or Baby Yoda here? Either way, count me in any time I find a Star Wars reference.

YOU MAY ENJOY: My video highlights many accessories you can add to a 4Runner TRD Pro.

“If the 2022 comes in that citrus metallic I’m buying it!” We have our first buyer in emgpr.

“I dig it, but honestly, I hope they do a black cherry as well.” Hoped themosth8edrealist.

jaynalack observed. “Think this color was ‘spring green’ on the Corolla iM...I will be upset if Toyota really does this to the TRD Pros though. I would rather see Canary Yellow.”

matt_drees offered. “Not a fan but who knows maybe it will look killer on the 4Runner.” Or a Toyota Tundra too. Maybe Toyota Tacoma.

vomotorsports_tr4h would be thrilled. “Finally, a color fitting for the Pro. I was getting tired of the same colors in a different shade.”

afrmnp had perhaps the top comment of the day. At least if you are a Toyota fan. “Anything looks good when it comes with a Pro Badge.”

Since @4runnersnacks was nice enough to mock-up several other potential 4Runner TRD Pro color possibilities, I wanted to list them here so you can comment with your observations. 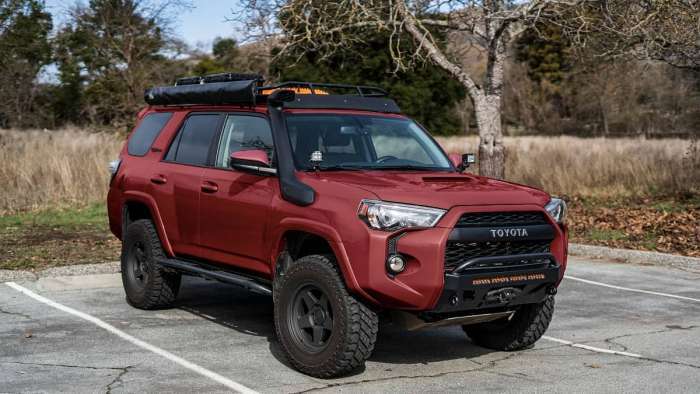 I think a Toyota Tundra in brick red would look tough and imposing. Imagine pulling your trailer through Rocky Mountain National Park in this one. 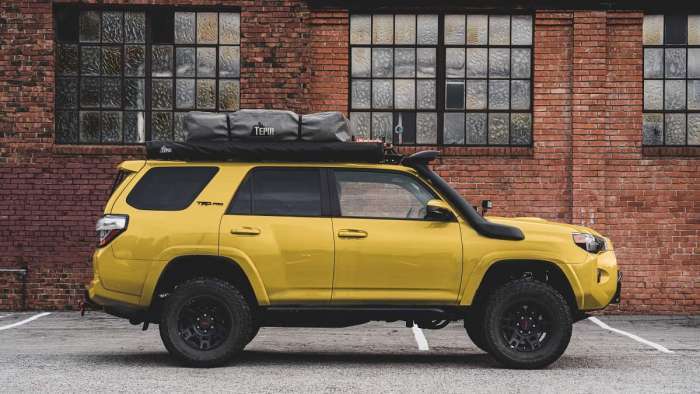 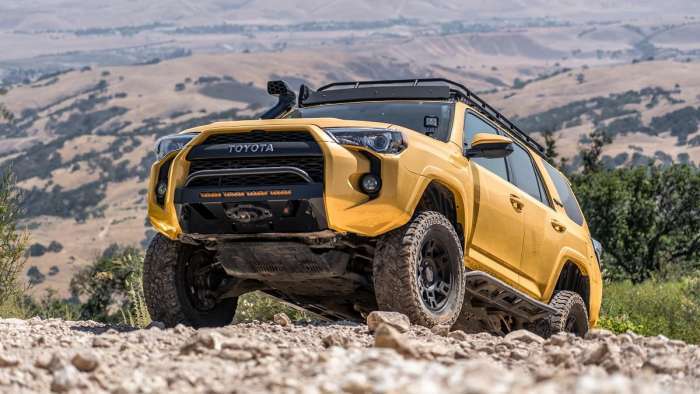 This is one of my personal favorites and it would be so different from all previous Toyota 4Runner TRD Pro colors. Could be bright yellow or mustard yellow and it would sell like crazy. 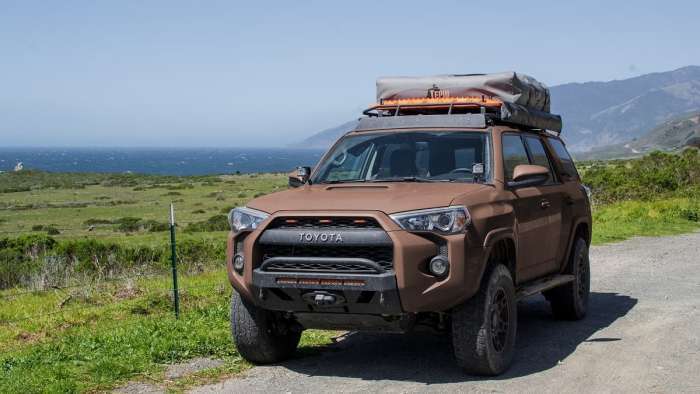 This color is also gaining traction in Toyota circles. Fans would like to see a Toyota Tundra and Toyota 4Runner and Toyota Tacoma in this color. 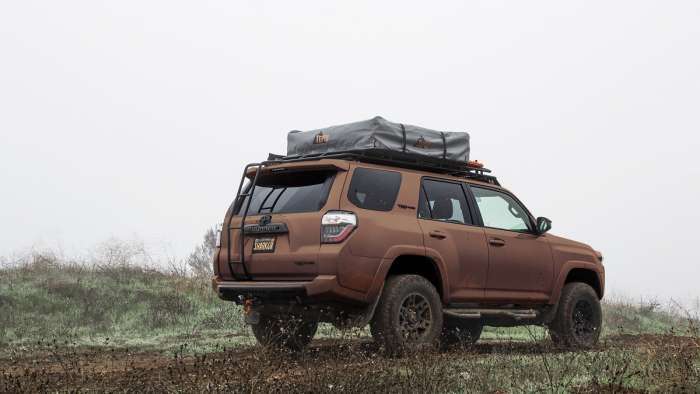 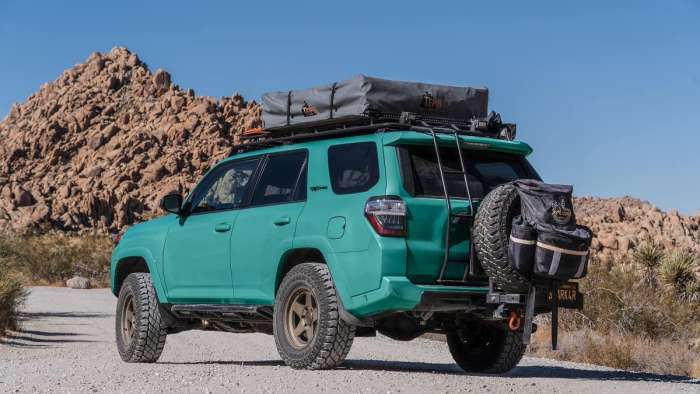 I am not really feeling this color personally, but that certainly does not mean it would not look incredible on 4Runner or Tundra. Like the old Toyota Summer Rain shade. 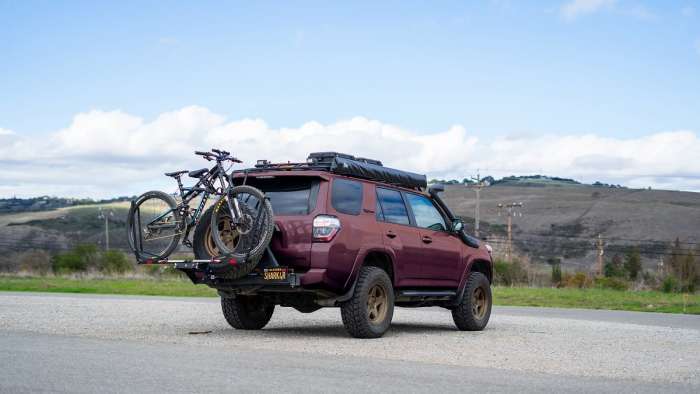 Black Cherry is my personal favorite choice for 2022 Toyota Tundra TRD Pro. I need to see this sometime soon on 4Runner and Tacoma. It looked amazing in retro FJ Cruiser.

What do you think of these potential 2022 4Runner TRD Pro colors? Can you see your favorite Toyota Tundra in lime green or yellow or brown?

YOU MAY ENJOY: Ranking all previous Toyota TRD Pro colors from worst to first.

Which one of these shades looked best on 4Runner in your opinion? If not these, what TRD Pro color would you like to see next?

See you next story when I show a video tour of a Toyota Prius hybrid battery.

vichmr wrote on February 27, 2021 - 3:36pm Permalink
Not a fan of the Citris Lime, but Brick Red looks really good and I’d like to see more pics of the Black Cherry. I know there are a lot of fans of the Lunar Rock, Cement, Army Green, and Silly Putty color on the Taco, and I’m glad they are getting colors they are really enthused about, but I’d like to see some new, less wild colors. Galactic Aqua Mica on the Celica looks amazing and would look great on the Tundra! How about the Atomic Silver from Lexus? Or possibly a variant of British Racing Green? I guy can dream, right?
DJ wrote on February 28, 2021 - 5:51pm Permalink
I own the 2020 4runner TRD Pro in Army green. This article is alot of speculation and false news. When they release it you will know the colors and changes.
Monte Beerbower wrote on February 27, 2021 - 9:58pm Permalink
I'm debating lunar now but man if I could get citrus lime that would do it for me!!
Ramzi wrote on February 28, 2021 - 3:43am Permalink
Looks really nice I would add small yellow led lights in the hood vent and on the tail 3 in each side The price is way to high $54k I remember when I bout my old 4 runner for 38k Just couple years ago I wish they add all this stuff to the 2022 tundra then I will be happy customer
rons23 wrote on February 28, 2021 - 4:27am Permalink
Brick Red on that Tundra is my choice. I would follow that with the Dark Brown and Black Cherry. I think the Citrus Lime on the 4RUNNER, but not the Tundra.
Isaac wrote on February 28, 2021 - 9:30am Permalink
The brick red and dark brown look good.
Ran wrote on February 28, 2021 - 11:34am Permalink
Enough of the colors I mean is all cool and fun but give us the new completely redesigned 4Runner I want to see the new body style & what are they bringing to the table what’s going to be under the hood, I’m tired of the color game by now as I have a 2012 4Runner love mine & I recently drove a 2020 cause someone rear ended mine so while I drove the 2020 I didn’t found no difference it handled the same there was nothing other than the lights & few things in the interior it was the exactly same thing so Toyota give us the NEW NEXT GEN I’m tired & done with the same old!
David Solis wrote on February 28, 2021 - 1:12pm Permalink
I would like to see the forerunner in money green. Since almost every dealer asks for 5-20,000 extra markup on this car ,greedy bastards i will soon give up on any toyota and shop elsewhere.made many attempts to buy this vehicle,i refuse bidding wars on new cars. Bronco is looking better and better.
Don wrote on March 9, 2021 - 1:57pm Permalink
Something close Jeep gator green or go I would be awesome!
John wrote on March 16, 2021 - 1:44pm Permalink
That green is perfect!!!! I’ll put my name on the list for that now. No more lame colors like quicksand. It’s a trd pro. Not a Soccer Mom’s capri pants.
Abby Gober wrote on June 12, 2021 - 9:50pm Permalink
I LOVE YELLOW bright yellow or Mustard yellow