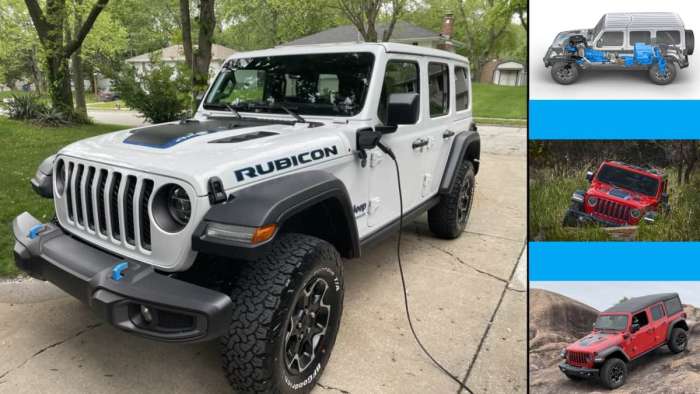 The Jeep Wrangler 4xe may not sip gas quite as efficiently as the Toyota Rav 4 Prime, but it’s a capable off roader with enough oomph to break traction with off-road tires. With a first tank drive range of 631 miles, Redditor Corn_Sauce enjoys their purchase in white.
Advertisement

In a brief review, they claim that this is one of the purchases that they’ve been the most happy with. The driver notes that his wife has accidentally caused the SUV to break traction by being over-zealous with the throttle. While the Toyota RAV4 Prime is a great hybrid, I honestly feel like there’s not a lot to dislike about the Jeep Wrangler 4xe, and Corn_sauce, the owner of the White Wrangler 4xe in the main photo agrees.

Corn_sauce notes that they haven’t taken their new ride off-roading yet and will not be able to for a little while, but I look forward to hearing back about the performance there, as well. The street performance of the vehicle is apparently more than a little bit fun, with several modes being offered in the Jeep's UConnect entertainment system. I wonder if Corn_Sauce likes the UConnect as much as I do?

Using the regenerative braking, one pedal driving is possible for the aerodynamic-as-a-brick Wrangler. The most frugal drivers should be able to squeak 50 miles out of each gallon or better if they tend to fill up the battery frequently and as such don’t find themselves utilizing the gas portion as often. I’d note that this option would require the vehicle to operate under less than optimal conditions, and that the performance won’t be as impressive in the all-electric mode, either, because Jeep went the full hybrid route rather than the gas range-extender route of the plucky BMW i3.

Even though it’s only capable of about 22 miles on battery only, the 4xe should have enough range there for most city drivers, but suburban or rural drivers may see themselves using gas more frequently as they get closer to the 50 miles per gallon that the 4xe claims. The Redditor actually “was pushing the electric motors as hard as I(he) could to see the limit before the gas would kick in” and still managed over 7 miles on a 3rd of a charge. The Toyota RAV4 Prime, in comparison gets up to 42 miles on a single charge but isn't really rock-climb ready. The Jeep Wrangler and Toyota RAV4 are not very alike in their handling characteristics, but it is interesting to note that this one user managed a RAV4 tank range, even if they had to charge the vehicle multiple times. I find this significant because for many drivers, this is exactly how the vehicle will be used. Obviously doing the same with the RAV4 will show it having a lot more than 600 miles on a tank.

The batteries in the Jeep Wrangler 4xe are fairly small because it’s a hybrid, storing only 17.3 kwh. With the small battery packs, they take a while to charge: 2 hours on a level 2 charger. Compare this to the much faster times seen available with DC charging and other electric Vehicles, like the Porsche Taycan, and it becomes a little more evident why the gas motor was deemed necessary.

The Jeep Wrangler 4xe can go batteries only in any of its modes, including 4Lo, the rock crawling gear that truly makes Jeeps the Trail-Rated goats that they are. Indeed, this hybrid has more than 1 million miles of testing under its belt and has shown itself to be capable in heat, cold, snow, sand, mud, and even up to 30 inches of water. The batteries themselves are housed in the rear portion of the vehicle, under the back seats, where the vehicles climate control will keep them at the optimal operating temperature. Li-ion batteries operate best at around 70 F, the same temperature most humans find to be comfortable for their ambient surroundings.

Heat and Cold will of course affect Lithium Ion battery life, but the gas motor helps relieve some of those stresses. The gas motor can charge the batteries to full in about 2 and a half hours (but while you’re driving), a little slower than a level 2 charger can, this is also less cost effective for the consumer. It does seem like a reasonable way to charge for near-all-electric shenanigans once you get to the place you want to go off-roading or rock-climbing, as many trails don’t yet have the electric-vehicle infrastructure required to charge other off-road-capable vehicles; perhaps the Ford F-150 Lightning or the supposed Ram 1500 ePick-up that’s rumored to be in the works over at Dodge. I hope we get to see more test footage of the Electric Land Cruiser that's being tried out in Australia.

With models like the Tesla Model Y, BMW iX, Volkswagen ID.4 and Porsche eMacan all having fairly low clearances, I feel like the Jeep Wrangler 4xe really sticks out as being the most off-road capable electric vehicle at this time. Even the GMC HUMMER EV Truck, with its whopping 1000 horse power, probably won’t be able to compare as its 9000 pound weight will make soft surfaces more difficult and may even demolish historical bridges if drivers don’t check the weight limits of the roads on which they motor. The 4xe shouldn’t have this problem because it only weighs about 5300 pounds.

I seriously love the Jeep Wrangler 4xe Hybrid. It’s a neat little vehicle and, if I have to replace my Dodge Challenger R/T anytime soon; I’ll be joining Redditor Corn_Sauce in purchasing one of these beauties. It will make trips to visit my family a lot more convenient as some of them live off of sugar sand dirt roads.

Noah wrote on May 21, 2021 - 11:52am Permalink
Must have huge tank as MPGs not nearly as efficient Okay glossing through article I think author is extremely confused thinking the Jeep will get 50 mpg, that is 50 MPGe compared to 94 MPGe on prime and really has nothing to do with gas other than the epa “trying” to make an electrical equivalent. The ACTUAL epa range is 450-470 miles. To get 630 plus you have to have gotten at least 8-10 full charges during the time of the tank and kind of a useless stat to throw around in a headline...Someone doing the same hypermiling on a Prime would get over 1000 mile range
DeanMcManis wrote on May 21, 2021 - 8:19pm Permalink
Unfortunately Dodge, Chrysler, Jeep are well behind Ford and Chevy in their extremely slow move to electrification. Let alone Tesla and Rivian. The only plug-in hybrid has been the Pacifica minivan, and they have not even had one full electric vehicle across all of their brands and models. Or even any concept cars. With that said, vehicles like the Wrangler are exactly the ones that need to improve fuel economy. And being a PHEV it will do far better than any of it's gas or diesel brothers. The Chevy Volt had roughly the same size battery and managed 50+ miles of EV-only range. The good news is that Dodge and Jeep could use this plug-in hybrid drivetrain across all of their gas guzzler vehicles, large and medium sedans. And they should do that ASAP! So it's good EV news overall, but hopefully not too little, too late.
Víctor Myers wrote on May 22, 2021 - 10:57pm Permalink
Stellantis (formerly FCA and PSA) has offered the fully electric Fiat 500e for at least a couple of years. And it was just updated for 2021. In addition PSA has offered hybrid or electric versions of all of its models since 2019. FCA was well on its way to electrifying the entire Maserati line up before the FCA-PSA merger. Stellantis plans to have all of their platforms available in gasoline, hybrid, and EV by 2025. In fact as of 2022 they no longer need to buy any carbon credits from Tesla, as they were doing for the last 5 or 6 years.