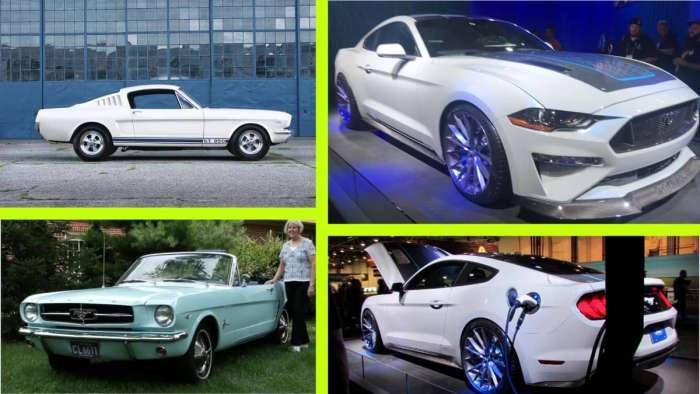 The Mustang Lithium: A One Off EV With A Secret

Ford Mustangs have been at the heart of American Motorsports for almost 60 years, with its big 6-0 coming in just 3 short years (as it was technically released as a 65 model year in 1964 at that year’s World’s Fair). In 2023, we’re expected to see the release of the first production Electric Mustangs, but in 2019, a company named Webasto helped Ford bring a Mustang to SEMA with around 900 horsepower of pure electric excitement.
Advertisement

As the world keeps turning and gas engines are becoming a thing of the past, auto manufacturers must either adapt to the changing world or stagnate and collapse. Even FCA group, with Dodge and all of its gas-guzzling Hellcats and Scat-Packs and various other massive v8 s, is beginning down the EV path and is expected to stop purchasing Emissions credits from Tesla soon, as their own product line will be low enough emissions to not need the supplemental credits to avoid paying massive fines.

Ford has made a few hybrid vehicles, and has released its first all-electric, the Mustang Mach E. As I’ve discussed before, the Mach E is a capable crossover but is not a ‘pony car’ and as such, isn’t really a Mustang. It’s a high speed electric crossover and that much is clear, but all the Mustang badging in the world doesn’t turn what looks more like a Toyota CHR into anything resembling its proper cousins, like the Boss 302 or even the Hoonicorn.

In 2019, Webasto and Ford got together for an automotive show in Vegas, a little get together thrown by Specialty Equipment Market Association or SEMA. SEMA, as it’s known, is host to many reveals every year, so Webasto and Ford had their work cut out for them if they wanted to draw heads and make a splash, but they managed it.

Webasto stuffed one of their 800 volt batteries, similar to the size found in the Porsche Taycan, though it has a Megawatt of discharge, meaning it can unload its power faster than most EV batteries. This, and the single, 900 horsepower electric motor allow it to be ridiculously fast, because with only one motor, the Mustang Lithium manages to save a lot of weight which reduces performance substantially.

What truly makes the Mustang Lithium unique among electric sportscars, is its Getrag MT82 six-speed transmission. Webasto and Ford beefed up this transmission to withstand over 1000 foot pounds of torque to make sure that it’d be able to translate all that power to the wheels, and Ford’s advanced aerodynamics package should help the vehicle stick to the track, for the most part.

An interesting thing to note about the Mustang Lithium, and its six-speed, is that despite being kitted out with three pedals (Clutch, Brake, and Throttle), if a novice driver were to set themselves in the driver’s seat, they’d be able to slide the shift knob straight into 3rd, and the instant-on-torque of the electric motor, would allow the Mustang Lithium to be driven just like a normal one-speed transmission EV. The difference with it, is that the driver can choose the power ratio, allowing them to do fun things, like break traction on a whim, or make the wheels spin faster than the motor itself is capable of spinning up to. This should allow the Mustang Lithium to achieve top speeds that other EVs just can’t compete with. Notice that the Taycan, with its 2-speed gearbox topping out at around 160 miles per hour, while Bugattis and McLarens can zoom well into the 200 mph range. I’ll admit that most drivers will never get to this speed, but the 6 speed of the Mustang Lithium should allow it to hit a higher top speed. Also, while in 6th gear, the Lithium should be able to use regenerative braking more efficiently than other EVs, but I can’t be certain about that.

Electric Vehicle owners often consider the notion of gears “quaint” and outdated, but just like the automakers of old found, you can only spin a motor so fast, and wheels can spin faster. I was unable to find definitive numbers for the Mustang Lithium’s track performance, but Ford claims the quarter-mile acceleration was “Stunning”.

The only disappointing feature of the Mustang Lithium is Ford’s implication that gracing electric motors with a manual transmission is likely to only be done in this one instance and will not be seen on production electric Mustangs. Part of the reasoning behind this is that manual transmissions make it impossible for the car to drive itself, something that Ford is leaning on fairly heavily, despite setbacks experienced by Tesla and the potential strict product liability of any “driving assistance” gear that might get foisted upon us.

Marc Stern wrote on May 8, 2021 - 1:10pm Permalink
If you look at the first Mustang, it was officially a 19641/2 model, which could be classed as a 65, but it really wasn't. I don't know about you but I saw it for myself. And, another comment, the first Mustang was not looked on as part of motorsports. It was billed -- and I kid you not -- as a secretary's car. The small engine and real lack of any sort of big engine left it in its original category.