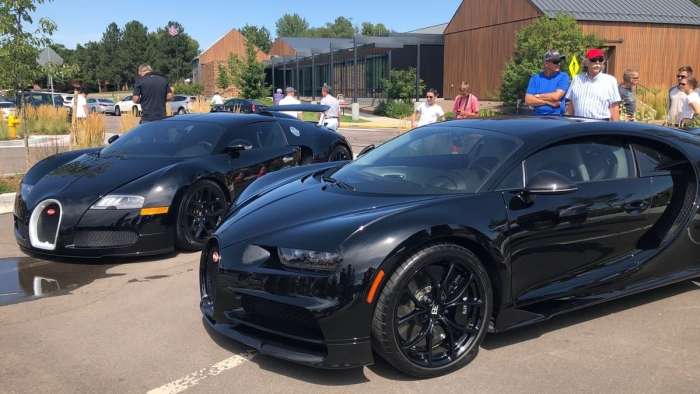 Bugatti Chiron and Veyron Out and About in Colorado

Now this is something you don't see everyday. A little exotic car show had two Bugattis on display, an older Bugatti Veyron and its new sibling the Bugatti Chiron.
Advertisement

The Denver area sees its share of Lamborghinis and Maseratis but rarely do you see something as stunning as a Bugatti. My husband and I attend a lot of car shows. Imagine our surprise when the little exotic car show in a village just south of Denver featured two Bugattis, an older Bugatti Veyron and its newer, younger, faster sibling the Bugatti Chiron.

My husband and I have actually seen the Bugatti Chiron out on the street before. You may not recognize what it is when you see it, but you will know that it is very special. It is so sleek, so beautiful and so exotic looking that you will want to know what it is. The Bugatti Chiron roared on to the automotive scene in late 2017, with a base price of $ 2,998,000. The Chiron gets its name from Louis Chiron, a race car driver from Monaco.

The Bugatti Veyron is also a breathtaking example of luxury on wheels. I remember being stunned by its beauty when I first saw one at the Los Angeles Auto Show. The Veyron also had an 8-liter, 16-cylinder engine, but it only has 1000 horsepower. The Veyron’s top speed was 200+. The Veyron’s base price was $1,914,000. I have read articles that say that just an oil change for the incredible cars runs at least $20,000.

It is especially interesting that the two Bugattis are in Denver because there isn’t a dealer here. The man who was babysitting the multi-million-dollar sports cars was reluctant to answer many questions. He said they are owned by a private person who has a huge automotive collection. Whoever the collector is, it was nice of him to share their beauty with the rest of us.

See you in my next story where I am discussing how Ram makes towing even safer with the 2020 Ram Heavy Duty new technology.